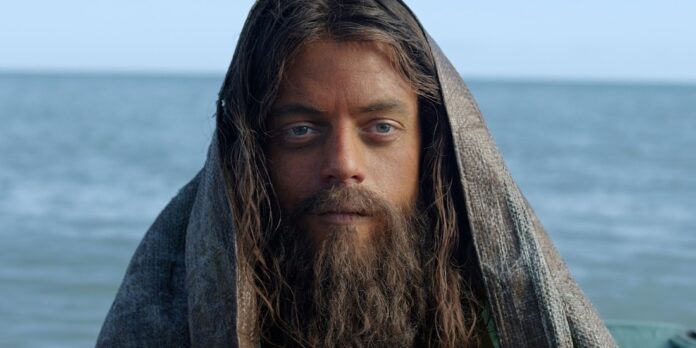 THE STORYAn eccentric mountain man is haunted by a recurring dream of being lost at sea. He discovers that the dream is real and that he is, in fact, one man in two bodies.

Solitude and gunfire fill the screen in the opening minutes of “Buster’s Mal Heart,” as a portrait of a man alone at sea is quickly followed by a man under siege in the wilderness. This juxtaposition encapsulates the existential ruminations of Sarah Adina Smith’s latest movie, a film that contemplates the meaning of isolation and escape. During a post-screening Q and A at the Tribeca Film Festival, Smith claimed that making “Buster’s Mal Heart” was akin to an “atheist’s prayer” and as close to a religious experience as she has had. Indeed, the movie aims to start a dialogue on grand spiritual and philosophical themes.

Rami Malek, of “Mr. Robot” fame, gives a multifaceted performance as Jonah, a young father, and husband who works the night shift at a dreary roadside hotel. Jonah’s nocturnal schedule instills in him a paralyzing feeling of exhaustion and a fear that he is drifting away from his family. The lack of sleep and human connection – Jonah spends long hours in the middle of the night wandering the empty hallways of the hotel – makes him vulnerable to conspiratorial thinking and fits of anger. His grasp on reality starts to loosen, and he becomes increasingly willing to sympathize with loony hotel guests, such as a nameless loner (Played with eerie intensity by D.J. Qualls) who arrives in the middle of the night talking about the impending “inversion” of the universe.

Jonah’s deteriorating grip on his own life parallels the other story within “Buster’s Mal Heart,” that of Buster (Also played by Malek), a Tom Hanks-from-Cast Away lookalike living a nomadic life in the woods, breaking into wealthy vacation homes when the residents are out of town. Buster is on the run from the law. While the authorities attempt to track him down, Buster bides his time by inverting the framed pictures in the house and calling talk radio shows to warn of the coming inversion. Buster and Jonah share a symbiotic relationship, but “Buster’s Mal Heart” is cryptic about the details of how the two stories relate. Is Buster a sleep-deprived hallucination, conjured by Jonah in moments of anxiety, or is he the same person, removed from his prior life as a hotel concierge? Sarah Adina Smith leans into the vagueness of the Jonah-Buster dynamic. Much of the fascination in watching the movie comes from trying to pinpoint the linkage between these two men.

Rami Malek is mesmerizing. As Buster, he eludes easy characterization. His portrayal of Buster is one of physical commitment and verbal minimalism. Buster treats the vacation homes that he invades as his own terrain, climbing on top of couches and kitchen counters to mark his territory. Malek turns the physical movement into a form of psychological expression, but he avoids giving away too much. It is his performance as Jonah, however, that serves as the movie’s center. As Jonah, Malek speaks with a slow and heavy cadence, the speech patterns of a person worn down and weary. Malek embodies a sense of foreboding. His descent into a dark emotional place is made all the more heartbreaking by the contrasting moments of love and laughter that he shares with his wife (A terrific Kate Lyn Sheil) and daughter (The most adorable child actor the world has ever seen).

“Buster’s Mal Heart” explores the depth of the human experience. Many movies with such lofty existential ambitions come across as grandiose. Thankfully, Sarah Adina Smith is too astute and versatile a filmmaker to allow her movie to drone on and pontificate. Smith peppers the movie with comedy, ranging from the morbid to the light-hearted. She also includes just the right amount of weirdness, an off-kilter vibe in tune with the idiosyncrasies of Jonah and Buster. The combination of humor and oddness makes “Buster’s Mal-Heart” a lively experience.

Since “Buster’s Mal Heart” sinks its teeth into some deep ideas, it is inevitable that the plot never coheres in a fully satisfying way. The story’s enigmatic developments occasionally hinder attempts to say something profound. The excellence of the film’s craft, as well as its innovative and ambitious flow, renders the lack of narrative symmetry insignificant. “Buster’s Mal Heart” does not always make sense, but it creates a world of total immersion in which the meaning of humanity hangs in the balance.