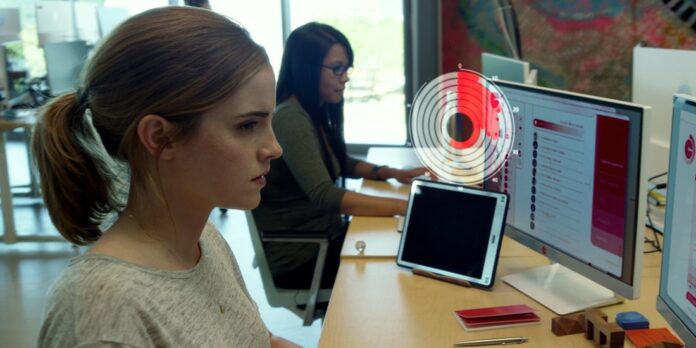 THE STORY – Mae Holland (Emma Watson) seizes the opportunity of a lifetime when she lands a job with the world’s most powerful technology and social media company. Encouraged by the company’s founder (Tom Hanks), Mae joins a groundbreaking experiment that pushes the boundaries of privacy, ethics and personal freedom. Her participation in the experiment, and every decision she makes soon starts to affect the lives and futures of her friends, family and that of humanity.

Technology is a funny thing. It’s a lot like government in a way. We need it. But as soon as we receive a little too much, we immediately get fearful of our liberties being stripped away from us. “The Circle” tries to tackle this paranoia, fear, and anxiety but does so in a way that is preachy, misguided and painfully dull. Not even the presence of heavy hitting, Academy Award-winning actor Tom Hanks or current “it” girl Emma Watson can salvage this mess of a movie. It’s one of the worst films of the year in its portrayal of a technology company, their intentions, and message it sends to the audience.

Mae Holland (Emma Watson) is a young tech worker who lands a prestigious job as a customer service rep for the giant tech company known as The Circle. After getting fully integrated into the company culture and becoming valued by the company’s co-owners Eamon Bailey (Tom Hanks) and Tom Stenton (Patton Oswalt), Mae is finally able to provide terrific health insurance for her parents, including her father (Bill Paxton) who has multiple sclerosis and rises up the ranks of the company that values knowledge through surveillance and constant communication. However, after crossing paths with a disgruntled worker named Ty (John Boyega) and realizing that the reach and ambition of The Circle can come at a cost of those who she loves, Mae is forced to ask ethical questions of the company that has given her everything.

After directing indie critical hits such as “Smashed,” “The Spectacular Now” and “The End Of The Tour,” it feels very odd and surprising that James Ponsoldt’s next movie would be “The Circle.” Both on an aesthetic level and on a thematic level “The Circle” is an unusual match of Ponsoldt as a writer/director to the material based on Dave Eggers’ book. “The Circle” is dealing with technology vs. society and any human drama within the film, which Ponsoldt excels at, is undone by terrible dialogue and horrible performances from the cast. Emma Watson’s British accent comes and goes freely with every line she says. She lacks any chemistry whatsoever with her two male co-stars John Boyega (Who has virtually no character whatsoever other than to serve the plot in the final act) and a truly god awful Ellar Coltrane as her childhood friend Mercer. I need to focus on Ellar Coltrane for a moment because in “Boyhood” he was quite good playing himself because that was a film so grounded in reality that it felt real and authentic. Here, we see how truly terrible he is, as an actor who has to portray a character with actual emotion outside of his own personal scope. His line readings are some of the worst of the year and it proves that those who truly hated him in “Boyhood” are now absolutely vindicated. Even America’s Dad, Tom Hanks, cannot save this movie as he does not bring anything to the character of Eamon Bailey. It’s a lifeless performance where the only high point is one unnecessary but unintentionally funny f-bomb towards the end. Special mention must be made of the late Bill Paxton who died tragically earlier this year. He portrays Mae’s multiple sclerosis-stricken father and even though his character barely does anything in the film, it’s a final reminder that Paxton was willing to challenge himself as an actor in his sixties and if it were not for his untimely death, would have continued to give us great supporting character actor performances.

“The Circle” is brought down by a truly troubling script that mishandles how technology plays a part in everyone’s lives, where it is going and how the people running these companies ultimately view the world. Just because they’re big and powerful, does not mean they want to take over the world and change it for the worst. Now, one could make the argument that the changes for the worst would be unintentional and that those with such power cannot see how their decisions are having that kind of impact globally when all they see are the benefits financially speaking. However, “The Circle” has a lot more problems than its premise, ideas, and stance on the matter. It is visually bland, boring, horribly acted, and written without a single ounce of excitement, flair or cohesion. I could care less that “The Circle” is watching me. I watched “The Circle” and it’s one of the worst films of 2017.