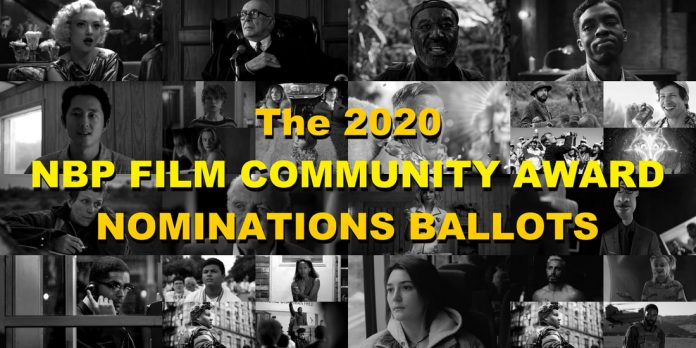 It’s time! Due to the long awards season timeline, they’re here later than usual but it’s now finally time to cast your ballots for the 2020 NBP Film Community Award Nominations. The eligibility period for the ballots is the same as this year’s Oscars, so any film released January 1st 2020-February 28th 2021 is eligible for this year’s ballots. So that means movies like “Judas And The Black Messiah,” “Malcolm & Marie” & “The Mauritanian” are eligible. Because we’re going by the Academy’s rules, this means that “Small Axe,” “Bad Education,” “Uncle Frank,” “Sylvie’s Love” and other movies competing for Emmys are not eligible (and yes….”Hamilton” too).

We are very excited to see what you will choose this year. Ballots are due two weeks from today on February 26th and the nominations will be announced on the Next Best Picture Podcast on March 2nd 2021.

Click below to fill out your ballot and help create the nominations for the 2020 NBP Film Community Awards.

​* Please do your best to use the FULL FILM TITLE in your submission responses and for acting categories to state the actor AND the film you wish to nominate them for.*