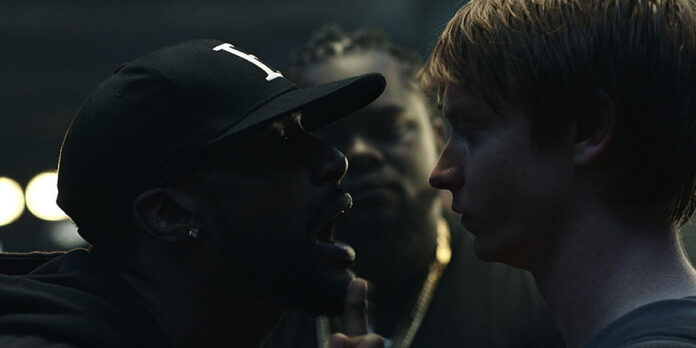 THE STORY – A progressive graduate student finds success and sparks outrage when his interest in battle rap as a thesis subject turns into a competitive obsession.

​​”Bodied” is a loud, aggressive, no holds barred film about how anything goes when it comes to a rap battle. The film does not pull its punches when it comes to the insults or punchlines, it focuses on the sheer adrenaline that comes from the “no fucks given” attitude that is dripping from each rap battle scene. It attempts to touch on several social issues but does not handle them with the best care and ends up being more offensive at times than anything else. All in all, “Bodied” is an energetic, kick-ass piece of filmmaking that is in your face from beginning to end.

While researching for his thesis paper at Berkley, Adam (Calum Worthy) discovers passion and success in the rap battle scene. While studying rappers, their lyricism, and their flow, Adam discovers that he has a knack for putting bars together himself. Adam finds success in battle rap and begins to quickly move up in the scene with his wicked punch lines and metaphors. The film does not necessarily have an ultimate goal it just focuses on the art of rapping itself and the battle scenes.

“Bodied” lives and dies by its battling scenes, while those scenes are dripping with style, they are the saving grace of the film. Whenever “Bodied” tries to shift off of the subject of rap and move into more personal moments, it falls a bit flat. These moments aren’t particularly poorly filmed, acted, or written, the battle scenes just come with so much intensity and brutality that whenever the film does decide to slow up its pace you’re left feeling a little disappointed.

The film also does try to tackle a couple of relevant social issues, mainly through dialogue, in the form of comedic relief. Unfortunately, the film falls flat on its face when it comes to this subject because it mostly ends up being offensive. While the film makes it clear that anything goes when it comes to battling, it will still make fun of certain race or sexuality issues in non-battle scenes. It doesn’t handle these topics well and some moments are indeed a bit cringe-worthy.

However, the direction from Joseph Kahn, a director who usually is behind the camera of some of the biggest music videos over the past several years, is easily some of the greatest to appear in a musical-type film ever. The camera moves with a mind of its own and is constantly in a character’s face or sprinting around them in an attempt to keep up with their bars. The only thing you hear is the spit leaving their mouth, the violent shaking of their arms while they hurl insults at their opponents and the physicality that each word carries.

The camera moves with precision and violence much like the rhymes themselves. Focused on delivering the most eviscerating visual approach possible, Kahn and cinematographer Matt Wise bring you into the battle itself. While most musical films are so extravagant and grand that you can tell it is being staged for the purpose of the film, “Bodied” brings us even closer to the action. It puts you right there with the rappers so that the hairs on the back of your neck stand up with each metaphor and your ears ring from all the constant cheering.

In terms of the art of rap itself, the film is rather adept in not only its lyrics but its flow. It treats the art of hip-hop with care and grace, giving each rapper a good amount of screen time to show off their unique talents. Whether it be their hysterical punchlines, their witty wordplay, or just the way they can flow between stanza’s, each rapper is given a moment to shine. The film never loses consistency either, in fact, it gets better as the minutes go on. The rhyme schemes, the playful banter, it 0all gets progressively more impressive as Adam and his friends continue to rise up in the rap battle world, all building to one climactic battle that drips with brutality and vulgarity.

“Bodied” does not care what anyone thinks and goes straight for the jugular. It never backs down and is always looking for ways to one-up itself. While the pacing of the film is not the best and it does not handle its treatment of social issues the greatest, it still gives a great glimpse into the world of underground rap. Violent, aggressive, angry, reckless, “Bodied” treats the audience like a rap battle opponent. Words are a deadly weapon and in “Bodied,” anything goes.