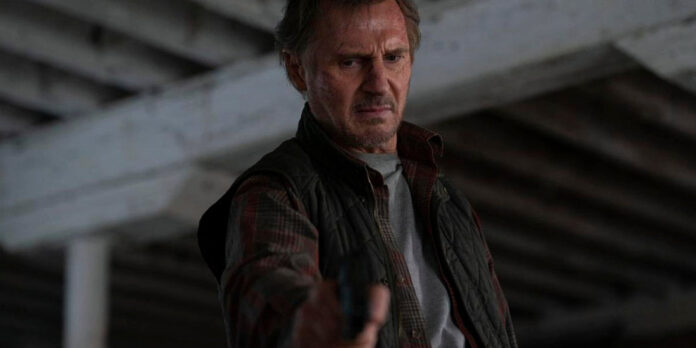 THE STORY – Travis Block, a shadowy government agent who specializes in removing operatives whose covers have been exposed, uncovers a deadly conspiracy within his own ranks that reaches the highest echelons of power.​

There are quite a number of films that can feel as if they are less the result of a pure artistic vision and more so a neatly produced package ready to be shipped out and consumed. This isn’t to say such fare can’t be entertaining or enjoyable, but there is a particular mark that is quite recognizable that tags a movie as something engineered to fulfill a basic expectation and not much more. Ever since Liam Neeson starred in “Taken,” this subgenre of watching grizzled old men with those particular sets of skills rain down carnage onto evildoers has been heavily populated by his own endeavors. The examples are so endless that they become nearly indistinguishable from one another in tone and style. Unfortunately, “Blacklight” only continues this trend to an inevitable feeling of lethargy that weighs down any fleeting moments of engagement that might be had.

Neeson stars as Travis Block, a government operative who specializes in shadowy operations at the behest of his longtime colleague Gabriel Robinson (Aidan Quinn), the current head of the FBI. Block is tasked with tracking down a rogue agent named Dusty Crane (Taylor John Smith), who is on the verge of revealing a secret plot to assassinate civilians following the murder of a high-profile political activist. Once on the trail, Block catches wind of the larger conspiracy himself and now is at odds with the powerful forces that have employed him. Teaming with a dedicated journalist (Emmy Raver-Lampman), Block utilizes his skills to expose these dark secrets and protect his family from the mortal danger that surrounds them.

It is somewhat remarkable how Neeson has been able to successfully carve out this little corner of cinema for himself these last few years. The concept of taking an aging star and putting them front and center in an action spectacle can be appealing, and even though many of the “Taken” derivatives have not always been successful, there are some intriguing entries littered throughout. Sadly, this one does not rise to any level of innovation, and much of that rests on Neeson’s sluggish performance. Even for a film that would never demand that much commitment, it’s difficult to find much captivating in his portrayal as he presents the bare minimum effort to inhabit the role of a seasoned professional with lethal expertise. The stiffness he exudes is matched by stilted choreography, highlighting an unenthused persona. Obviously, Neeson can be a gifted actor, but this genre has not been the arena to display that talent, and by this point, the tried and true methods that would normally sustain a film like this are wearing thin.

Not much about this ensemble stands out a great deal, either. Smith is able to carry some screen presence that makes him an enticing figure to watch, but his character is merely a plot device, and his ultimate impact is minimal. Quinn’s role could have been one that relished in a key of hyperbolic villainy. Still, he ends up being reduced to a fairly standard antagonist whose motivation is mundane and pedestrian. The only member of the supporting cast who actually makes the most of what little is given is Raver-Lampman, who gives it her all in a thankless part. It is also by no means the truest testament to her abilities, but she manages to create an endearing portrait that offers some spark of life in a dull landscape.

What ends up marring much of the film is the inescapable aura of an uninspired execution. One can certainly give credit to the assemblage of these action set pieces and intricate stunt work, but its presentation leaves much to be desired. Most of the sequences come across as wooden and banal, which is not to take away from the difficulty in performing such feats but more so how the end results are nothing that inspires anything compelling. Many of these scenes lean on a heavy-handed direction from Mark Williams, who seems fit to overuse distracting zooms and a pounding score to elevate the tension artificially. Flat characters also hinder the script as predictable archetypes spout the stale dialogue. The material has a more polished quality, but it barely passes into territory beyond merely the serviceable.

“Blacklight” is a film that could have had the potential to be a much more fun exercise. Within its structure are hallmarks of what could be described as trashier cinema but also the opportunity to dive into such pulp with unrelenting glee. Instead, what’s here is an apathetic demonstration of tiresome action sequences, weighed further down by a generally lifeless performance from its main star. Despite some of the supporting players trying harder than others, the outcome is still monotonous and tedious. As Neeson approaches seventy this year, one can only hope that this subgenre he spawned all those years ago may finally start to see an end. Time will tell if that means he can return to more exciting work, but it seems inevitable that the more dynamic actor will forever be lost in these types of repetitive projects.