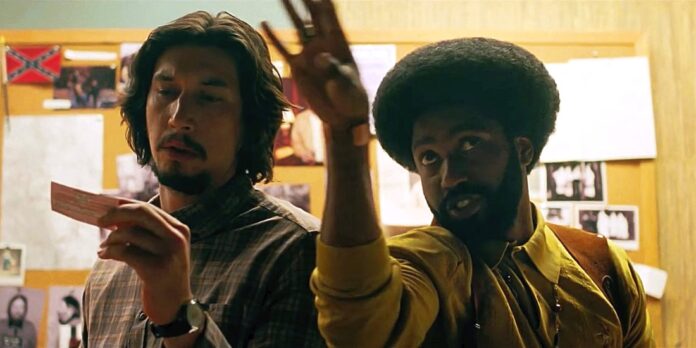 THE STORY – From visionary filmmaker Spike Lee comes the incredible true story of an American hero. It’s the early 1970s, and Ron Stallworth (John David Washington) is the first African-American detective to serve in the Colorado Springs Police Department. Determined to make a name for himself, Stallworth bravely sets out on a dangerous mission: infiltrate and expose the Ku Klux Klan. The young detective soon recruits a more seasoned colleague, Flip Zimmerman (Adam Driver), into the undercover investigation of a lifetime. Together, they team up to take down the extremist hate group as the organization aims to sanitize its violent rhetoric to appeal to the mainstream.

It has been nearly thirty years since filmmaker Spike Lee gave us “Do The Right Thing” where he commented on race relations and the ever-long battle between love and hate. That battle continues in his latest film “BlacKkKlansman.” In fact, it pre-dates the events of Lee’s 1989 film and he sadly shows how it is currently going on today. Boldly utilizing the acts of hate committed last year in Charlottesville Virginia, Spike Lee illustrates that despite how often funny and entertaining his latest film can be, it should also serve as a tragic, horrifying and stark reminder as to how important the battle still is and that it has never gone away.

The year is 1979 and Ron Stallworth (John David Washington) has just recently become the first black police officer in Colorado Springs, Colorado. Dissatisfied with his job working in the records department, the talented, smart rookie cop asks for a different assignment from his Police Chief (Robert John Burke). Opportunity comes knocking when Stallworth notices an ad in the paper to call in and join as a member of the Ku Klux Klan. Using his intellect, intuition and search for justice, he and his department go from investigating the potential dangers of the Black Power Movement in their town to the Ku Klux Klan who have more serious and immediate threats of violence of their own brewing up. However, being black, there’s no way the Klan would ever let Stallworth join their organization. In comes Jewish detective Flip Zimmerman (Adam Driver) who acts as Ron Stallworth in person with the Klan members while the real Ron runs the investigation and initiates contact over the phone. Together, the two cops pull off an investigation that leads them all the way up the Klan ladder to the organization’s president, David Duke (Topher Grace). Yes, this all actually happened.

John David Washington (HBO’s “Ballers” and son of Denzel Washington) becomes a star right before our very eyes in “BlacKkKlansman.” Displaying qualities of intelligence, confidence and inhabiting justice in the face of bigotry and discrimination (Even from inside his own police force), his character Ron Stallworth is an unlikely hero who we instantly root for. That doesn’t mean he’s alone though. Detective Zimmerman has just as much to lose (If not more) than Stallworth, for he is the one having to interact with the Klan in person and go through their rigorous and intimidating methods of vetting to make sure he is not a cop. The tension is high and Spike Lee pulls off a wonderful balancing act with the film’s comedy (The opening line of text says that “Dis joint is based on some fo real shit, fo real”) and it’s more frightening moments – convincingly and terrifyingly played by Finnish actor Jasper Pääkkönen, as a Klan member who has suspicions about Zimmerman’s true identity.

Spike Lee’s film is all about contrast. We see the Black Power Movement rallying together behind a united cause when actor Harry Belafonte tells them the story of the disturbing murder of Jesse Washington by the Klan. Lee intercuts images of David Duke initiating new members into the Klan’s organization while this emotionally powerful scene takes place. Cory Hawkins (“Straight Outta Compton”) plays Black Panther leader Kwame Ture who gives a passionate and rousing speech calling upon the young black people in the community to rise up to their oppression. This happens minutes after an odd black and white opening where Alec Baldwin (With some hilarious outtakes) recites lines of the Klan’s beliefs to potential recruitments for a video. Zimmerman is undercover with the Klan while Ron Stallworth is undercover, pretending not to be a cop as he grows romantically involved with a Black Power leader Patrice (Played by Laura Harrier from “Spider-Man: Homecoming”). All of this leads to an examination of identity, not just for the two cops involved in the story but of the country as a whole. Who were we? Who are we? And who do we want to be? Spike’s answer is not easy but it is essential.

“BlacKkKlansman” can be an uncomfortable watch for many. Hate speech is spewed by many of the film’s characters throughout the film’s over two-hour runtime. Spike Lee also takes famous films from cinema’s history such as “Gone With The Wind” and “The Birth Of A Nation” (No, not the 2016 one) and uses their imagery to express his message of hatred. The editing techniques used throughout the film are certainly unique (Lee’s unpredictable filmmaking style still remains intact) but the film has a few overlong sequences. The before mentioned inspiring but long speech by Kwame Ture, a dance-club sequence between Stallworth and Patrice and one too many awful racist rants from the Klan members who are just casually hanging, out all come to mind.

After over two hours of watching these two mismatched cops pull off the unthinkable (They get Stallworth not only successfully infiltrated into the Klan but also communicating with high ranking officials and appointed as a chapter President), Spike Lee then pulls absolutely no punches in showing us the worst of the worst real-life footage taken from last year’s attacks in Charlottesville. It’s hard to watch but Lee’s message is clear. As an artist, he is to be celebrated for making sure that today’s filmgoing audience understands that despite the entertaining story of this unorthodox investigation and the bizarre laughs contained within, that there is a much bigger story being told. It’s one that he has been telling us for over thirty years and we are forever grateful to have him keep on reminding us.