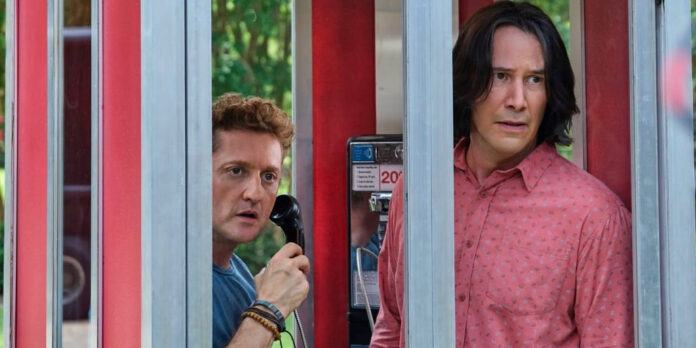 THE STORY – A visitor from the future tells best friends Bill and Ted that one of their songs can save life as we know it and bring harmony to the universe.

​​After 29 years, Bill and Ted are back, and they aren’t exactly living the “most excellent” rock star life they imagined. “Bill & Ted Face the Music” begins with a trip down memory lane recounting the events of the previous two films. Cut to Keanu Reeves and Alex Winter as the two beloved characters in the present-day performing at the wedding of Ted’s brother, Deacon. The performance isn’t exactly a hit with the audience except for their daughters/biggest fans, Thea (Samara Weaving) and Billie (Brigette Lundy-Paine).

On the homefront, things aren’t most excellent either as they go to couples therapy because their wives Elizabeth (Erinn Hayes) and Joanna (Jayma Mays) feel disconnected to the slackers and their rock obsession. Frustrated with middle age mediocrity, the Bill and Ted wonder if they’ll ever get back to the former glory of the Wyld Stallyns.

Things turn around when they’re approached by Kelly (Kristen Shaal), a visitor from the future who takes them to visit the “great ones” in the year 2720. It’s there that Bill and Ted are told that they must write a song in 78 minutes to save reality and unite the world. Dude, that’s ludicrous! Can Bill and Ted write a song that will save the world? The two rockers embark on a crazy journey to find out.

And what a journey it is. During those 78 minutes, Bill and Ted encounter Death, a crazed robot, and the ultimate struggle of writing on a deadline. If anyone can handle it it’s these two though. The film has plenty of jokes and stays true to the signature Bill and Ted humor, but it isn’t afraid to get sincere with its audience in the message of “be excellent to each other.” It’s nice when a movie ends and you have a smile on your face instead of a wave of existential dread, as is constant this year.

“Bill & Ted Face the Music” is essentially the “Avengers: Endgame” of the franchise. We say that because the film assembles the ultimate cast of characters for Bill and Ted’s band to save the world. (Band members include Kid Cudi, Mozart, Jimi Hendrix, and Louis Armstrong.) Not to mention, there are plenty of callbacks, cameos, and references to the previous two films. Director Dean Parisot crafts a time travel movie that hops through time in a fun way. You name the time, and it goes there. Whether it’s the future, present, or past, the characters are getting in the phone booth and heading there. Another fun aspect of the film is how time travel lets us see different versions of Bill and Ted as washed-out rockstars, flashy celebrities, and incarcerated prisoners (It’s totally creative, dude).

There are times when the plot gets a little too bloated. Bill and Ted are traveling to the future; their daughters are traveling to the past; their wives are traveling…all around. Ultimately, the wives take a back seat and show up occasionally to remind us that Bill and Ted are married to princesses from the 1400s (in case that was a plot point you forgot about or never knew). There’s just a lot going on here for a 90-minute movie, and it seems like a few side plots could be cut out to make things a little less dizzying.

Despite some overstuffed plot points, Keanu Reeves and Alex Winter really sell the whole thing, as to be expected. You can tell that they’re having a blast returning to these characters. The performances are goofy, sure, but they’re so much fun. The two get to mix it up a little bit by playing different variations of the characters in scenes where they visit Bill and Ted in the future. It’s nice to see Winter and Reeves back as the best buddies trying to save the world. They have a great on-screen dynamic that’s a joy to watch.

Samara Weaving and Brigette Lundy-Paine are the standouts as Bill and Ted’s daughters. The two act just like their dads and spend plenty of time spouting the famous “totally excellent” lingo, but add their spin to make the characters unique. It’s pretty fun to see Bill and Ted as dads, and it’s believable that these are the daughters they would raise.

After a long hiatus, fans will be happy to see Bill and Ted rocking out on their screens again. “Bill & Ted Face the Music” is silly escapist fun that will bring a smile to your face.