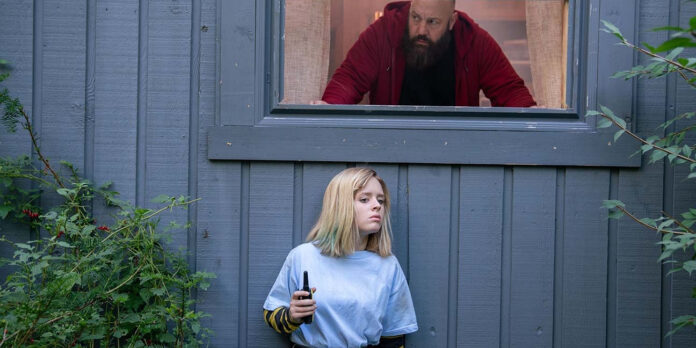 THE STORY – Spunky and rebellious Becky tries to reconnect with her father during a weekend getaway at a lakefront house. But the trip soon takes a turn for the worse when convicts on the run, led by the merciless Dominick, suddenly invade the home.
​
THE CAST – Lulu Wilson, Kevin James & Joel McHale

​​​Take “Hanna,” add in a bit of “Home Alone,” plus Kevin James as a Nazi, and you get “Becky”. Cary Murnion and Jonathan Milott’s balls to the wall thriller doesn’t waste much time diving into the action. If you’ve ever wanted to see a swastika-wearing James try to murder a little girl for 90 minutes, “Becky” has you covered.

That pretty much covers it for a plot description, but I’ll dive a little deeper. After violently escaping from prison, four men, led by James’ Dominick, descend on a cabin in the woods to find something they’re looking for. Unfortunately, the cabin is occupied. Full of anger at the world after the death of her mom, Becky (Lulu Wilson) is unpleasantly surprised with a weekend away with her dad, Jeff (Joel McHale), his girlfriend Kayla (Amanda Brugel), and her young son, Ty (Isaiah Rockcliffe). When Jeff decides to propose, that sets Becky off, and she runs to her treehouse in the woods, just in time to miss the Nazis.

Lulu Wilson is the standout of the film, mostly because she’s actually quite frightening. As Becky is forced to fight for her life and the lives of her family, all of the anger brewing inside of her explodes. Becky channels that energy into fighting these convicts in every sadistic way she can, using only the tools at her disposal. At only 14, Wilson gives a truly committed performance, holding her own in some pretty grisly scenes.

While Wilson gives the standout performance, it’s the violence that takes center stage in “Becky”. As the Nazis torture Becky’s family inside the house, she takes the opportunity to set traps throughout the woods. But here we’re not talking about digging a pit or a mere tripwire. No, that’s too tame for Becky. Instead, boards with nails are smashed into their faces, keys are jammed into eyes, and one even takes a lawnmower to the face. It’s often pretty gruesome, but Murnion and Milott want you to see every moment.

Too often though, the violence is so graphic that it crosses the line from scary to silly. After Becky stabs Dominick in the eye, he goes back to the cabin to treat his wound. He pulls his eyeball out of his socket and asks another man to cut it out using children’s scissors. We see every bit of that action. But seeing Kevin James with his bloody eyeball hanging out of his head is more goofy than gross, and it doesn’t feel intentional.

Still, there’s much to respect about the craft in the film. It’s very well-edited, and the film flies by without a moment wasted. Frequent cross-cutting brings Becky and Dominick eye-to-eye, even when they’re nowhere near each other. The action is well directed throughout too, making sure the audience doesn’t get lost in the chaos.

Kevin James has already shown a wide range in his career, from playing a goofy but lovable mall cop to a goofy but lovable zookeeper, and even more goofy but lovable characters. Naturally, the next step was playing a Nazi. Sarcasm aside, James is fine in the role, as is McHale, also taking a step into the dramatic. Neither is particularly good or noteworthy though. Both roles could’ve been played by almost anyone and have the same effect. The downside of James only being “fine” in the role here is that it becomes more of a distraction. He’s never very scary. As previously noted, Becky is the scariest character in the film. While the film may be most remembered as the one where Kevin James played a Nazi, it doesn’t do much to help the film outside of that fact.

“Becky” should satisfy viewers looking for a fun, gruesome thriller. The violence is brutal and overpowers any sort of motivation that the characters might have, but it’s at least entertaining. Those hoping to see a more memorable turn from James might be disappointed, but you might see a star in the making with Lulu Wilson, a name you should probably remember.