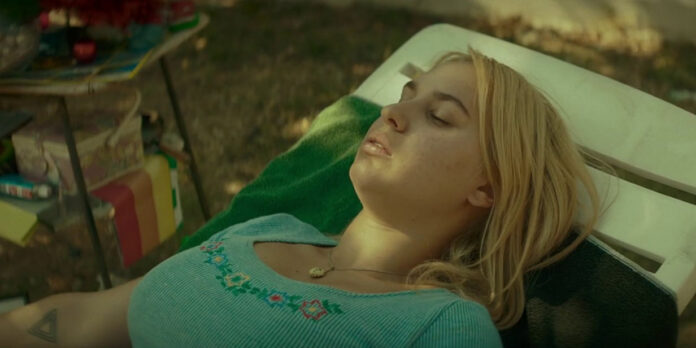 THE STORY – A few families living out on a limb in the suburbs of Rome. Tensions here can explode at any time; ultimately it’s the children who bring about the collapse.
​
THE CAST – Elio Germano, Tommaso Di Cola & Giulietta Rebeggiani

The D’Innocenzo brothers are not necessarily known for their love of humanity and their most recent feature, “Bad Tales,” further proves that. Set in the suburbs of Rome, their latest film is a series of vignettes and characters all interacting in a tense and ravaged town. These humans act like animals. While an adult is describing in detail what he’d do to a neighbor as she’s outside, children are looking at a search history riddled with pornography links. The film stays this way while interweaving between adults and children that reside in this white-fenced town. These characters feel reminiscent of David Lynch’s work, digging into the blue-collar workers and the hidden horrors that disguise themselves in the normality of an everyday working life. The parents are kids who weren’t taught as children and the children are copies of their parents ready to repeat this cycle.

The plain out unnatural surroundings is further disguised in the natural look of the film, with its excellent visual work. Despite the town’s participants, the D’Innocenzo still paints the shots in an orange hue that resembles a golden Italian summer.  A shot of leftover toast has never looked as good as it does when it shines through drapes in the early golden hour of Rome. These establishing shots feel dreamlike and completely contrast whenever we return to these characters. A tracking shot through an empty classroom while swerving left and right entirely out of focus is something suited to the D’Innocenzo’s work.

The timeline remains blurred in this film, with pool parties and barbecues that repeat themselves. Scenes at the dinner table give the only recognition that the day has ended and will start anew. These scenes also define the hostility between the parents and children of the town as well as the bitterness between all of them. The parents flounce their kids in front of neighbors to read their A+ report cards like they’re a new kitchen island or fresh lawn. At the same time, they’re ill-prepared to deal with real consequences. At one of these dinners, a son begins to choke and everyone is unaware of what to do. His dad grabs him by the legs and swings him upside down, saving his life but breaking down into tears due to the shock of it all. It’s a brief moment that erases the feral act of all these people before. But it’s quickly torn aside to reveal the same as before. The dad becomes angry at showing emotion and storms off, causing the mother to hit the son and the daughter to laugh at his agony. It’s a scene so bewildering, its obvious camera movements and choice of long shots are a combination not regularly used but the D’Innocenzo’s make it work. They also can get the best out of their actors in expertly layered performances. A long shot of a man crying in bed is as good of a performance as you can get at trying to create sympathy for these sour townsfolk but is unfortunately not enough to fully convince us.

All these vignettes are the same in broadcasting these messages of a lack of innocence and sex-fuelled rage. These stories are filled with unpleasant characters that make it impossible to feel emotion for them when matters get worse. They all build equally as well but also become weary after time. The style of “Bad Tales” is enough to keep the film going. Shot choices like a two-way car conversation being completely behind both characters and through the bars of a truck’s rearview is ingenious in every way. The D’Innocenzo’s continue to prove their individuality and should hopefully continue to perfect their craft in making these visually gorgeous but emotionally repugnant films.