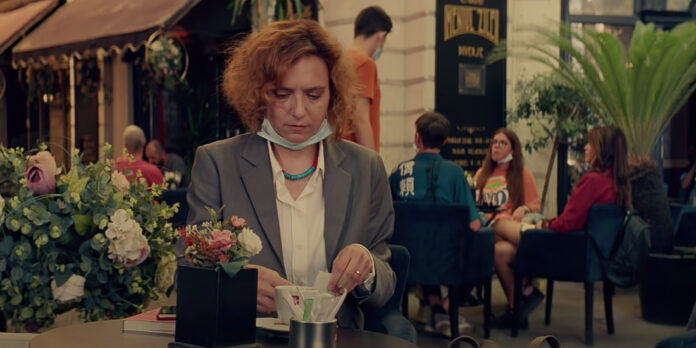 THE STORY – Emi, a school teacher, finds her career and reputation under threat after a personal sex tape is leaked on the Internet. Forced to meet the parents demanding her dismissal, Emi refuses to surrender to their pressure.

Jude pitched the film at last year’s Berlinale, and when the pandemic hit, he incorporated it into the film’s story. This is on full display throughout, with most everyone wearing masks and social distancing protocols in place. The first part of the film is perhaps the first piece of cinema made during the pandemic that actually captures what everyday life has felt like – the ubiquitous face masks are present, as is some public shaming of both people not wearing masks and people insisting that masks be worn properly. Everyone goes about their daily lives as best they can while keeping as distanced as possible, but everyone is on edge. COVID is all anyone can talk about, be it directly or indirectly. At one point, Emi goes to a pharmacy and asks for a Xanax – not a whole prescription, just one. The sympathetic pharmacist replies that they’re not allowed to do that, but they can give her something “plant-based” to help her stress levels. What really sets this section of the film apart, though, is its camera work. As Emi leaves a scene, the camera will pan, linger on, and/or zoom in on a seemingly random bit of the cityscape – a series of billboards, a mural, a plant growing through a crack in the concrete – that paints a complete portrait of Romanian life. It’s a surprising stylistic flourish, one that befuddles at first but grows into something meaningful. Unfortunately, as this part of the film continues, these sustained pauses at the end of the scenes disrupt the film’s flow more and more. Very little substance happens during this section except for world-building, which is an intriguing way of doing that. But after twenty minutes, the film has made its point, and it’s easy to start to feel antsy waiting for the film to get to the big showdown with the parents.

Not that the film’s second section helps much. The title card calls it a “short dictionary of anecdotes, signs, and wonders,” and that’s precisely what it is: A word or phrase (“French revolution,” “blowjob,” “robots,” “change”) appears onscreen with a corresponding image, and a narrator reads off something that either is or isn’t directly related to the word and/or image. This is another sneaky way of building out the world in which Emi lives and the world that Jude intends to read for filth. But again, while it’s intriguing at the start, it eventually grows to overstay its welcome, the occasionally jet-black sense of humor not nearly enough to compensate for the sheer volume of commentary being offered at a breakneck pace. It’s undoubtedly audacious, in both content and form, and provides some important context for the film’s third section, given its focus on Romanian history and social mores. The longer it lasts, though, the more you wonder when it’s going to end. Thankfully, it ends on perhaps its most potent, pointed bit of critique: The word “zen,” accompanied by the information that 55% of Romanians believe that rape is justified in some instances.

This brings us to the film’s third and last section, the all-important PTA meeting. Presented as an increasingly surreal kangaroo court, Emi is seated at a teacher’s desk in front of a group of parents seated in the school’s outdoor courtyard as workers prepare the space for an upcoming inspection. To say that the parents are a mess of prejudices and hypocrisies would be an understatement. One parent, who is particularly angry that her child has seen this wholly embarrassing and inappropriate video, decides that the only way to begin the meeting is to play the sex tape in full (which she has downloaded onto her iPad from PornHub). This inspires leering looks from the men and lewd commentary from all, just a hint of the high satirical register Jude will be working in for this section. The wide-ranging discussion that follows involves, among many other topics: how much someone can be blamed for something private getting leaked on the internet, the importance of memorization in learning, immigrants, social distancing guidelines, the Romanian military, parental responsibility, and Holocaust denial. And all of this before Jude reaches deep into his bag of tricks and pulls a “Clue,” giving us three possible ways this story could end.

The social commentary of this third section practically writes itself. Still, Jude is exceptionally vicious in his takedown of modern society (though much of it is based on Romanian social mores, there’s enough here that also applies more generally). To be sure, the hypocrisy of today’s world absolutely deserves a vicious takedown, but given that modern technology is advancing at a pace too fast for laws, let alone moral philosophy, to keep up with, it almost feels too easy. Still, Jude understands the heightened register in which satire works best, and most of the jokes land. The tone is even modulated well enough for some very serious, very bluntly made points about education and moral hypocrisy to land well, too, courtesy of Pascariu’s fired-up, fearless performance.

This third section of the film is strong enough to make you wish the film had gotten to it sooner and had taken less of a winding path to get there. However, the film’s second section is an intelligent bridge between the more observational tone of the first section and the raucous satire of the third, balancing them both in a way that allows the film’s wildly disparate tones to all feel like part of the same whole. “Bad Luck Banging or Loony Porn” may be exhausting to watch, but it ends with its best material, and upon reflection, it holds together slightly better than it felt in the moment. It’s a flawed piece of cinema, but one that feels vital and one that will be looked back on as one of the defining films of the COVID-19 era.