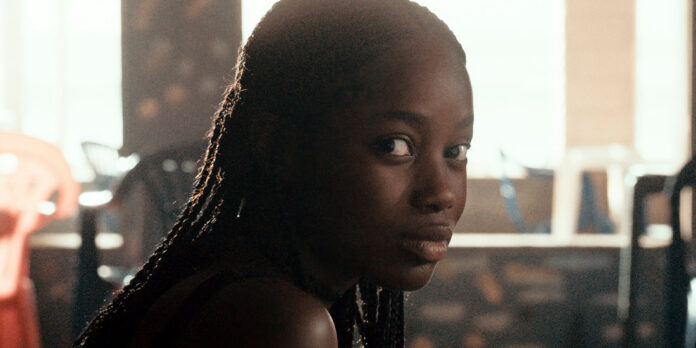 THE STORY – A soon-to-be-inaugurated futuristic tower looms over a suburb of Dakar. Ada, 17, is in love with Souleimane, a young construction worker. But she has been promised to another man. One night, Souleimane and his co-workers disappear at sea. Soon after, they come back to haunt their old neighbourhood by taking possession of the girlfriends they left behind. Some of the workers have come claiming revenge and threaten to burn the tower down if the developer does not pay their wages.

​​​​​​​​Words feel so useless when it comes to describing Mati Diop’s debut feature, “Atlantics.” Even a plot synopsis feels useless. I know I’m supposed to be reviewing “Atlantics,” but, you know the old saying about a picture being worth a thousand words? Well, films contain 24 frames – or pictures – per second (despite what Ang Lee has been doing this decade), and “Atlantics” is 104 minutes long. You can do the math, but I’ll tell you, I don’t think any film I’ve ever seen has made me feel the full weight of that saying in the way this one has.​

It feels silly to write out the plot, but let’s try to start there: A group of construction workers, working on a large, shiny building near the Atlantic coast of Senegal, haven’t been paid for months. Despite demands to their bosses and their bosses’ bosses, it doesn’t look like that will change any time soon. One of these workers is a young man named Souleiman (played by Traore), who is in love with a young woman named Ada (Mame Bineta Sane). And that’s where it feels like I should stop because part of the mesmerizing pull of “Atlantics” is in not quite knowing where this thing is going. And even when you do, it happens in ways you don’t expect. In fact, the plot doesn’t fully reveal itself until about halfway through, at which point Diop has cast such a spell that the plot barely matters at all.

Credit where it’s due, the almost hypnotic force of “Atlantics” can mostly be laid at the feet of cinematographer, Claire Mathon (who, between this and Céline Sciamma’s “Portrait of a Lady on Fire,” is surely cinema’s MVP of 2019), and Fatima Al Qadiri’s otherworldly score. Mathon, building on her work from Alain Guiraudie’s “Stranger by the Lake,” shoots images of the Atlantic ocean that invite you to walk right into the screen and bathe in it, while Al Qadiri’s haunting music swirls around and envelops you. It’s incredibly welcoming, a big help in a film as slowly, carefully paced as this. It’s also an almost intoxicating experience, one that makes the film’s mysticism feel grounded and plausible even when it doesn’t make sense. It’s hard to get magical realism right, and Diop and her collaborators get it oh-so-right.

The intimacy of “Atlantics” belies its complexity; as befits any magical realist tale, it only looks simplistic at first glance. Look again and you will find so much more happening, but you don’t need to read into the allegory or figure out the symbolism in order to enjoy it. The primal, fable-like quality of the storytelling and the purity of the performers’ emotions convey all you need to know. This is a love story first and foremost, and the film never loses sight of that. And it’s a pretty great love story at that, putting an Afro-centric spin on some Western tropes that I don’t dare spoil here. If you want to just sit back, relax, and get involved in a story that will transport you somewhere new through stunning images, “Atlantics” will absolutely provide that. But if you want to be challenged and forced to think, to have your worldview expanded and your biases provoked, “Atlantics” offers that, as well. I don’t know how Mati Diop weaved the magic that flows through every frame of this film, but I’m sure glad she did.