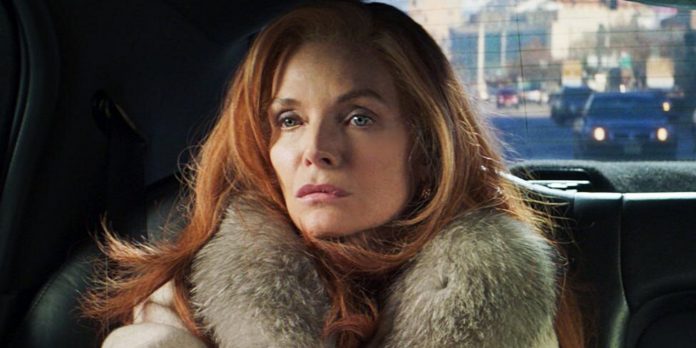 By Ryan C. Showers
​
Every time Michelle Pfeiffer stars in a new project, it is fair to say that, collectively, most of Film Twitter and ‘90s nostalgia fans place the hope that this will be the one, the film that finally carries her to an Oscar win. Pfeiffer has been nominated for three Academy Awards: Best Supporting Actress for “Dangerous Liaisons,” and Best Actress for “The Fabulous Baker Boys” and “Love Field.” For one of the greatest movie stars of the past forty years, there is something unfulfilling about Pfeiffer not receiving the ultimate recognition from the Academy. Pfeiffer consistently brings a world of emotional range and cinematic gravitas to every role she takes on. There are several films in which she should have been nominated and was not, like her iconic performance as Catwoman in “Batman Returns,” her dignified turn in “The Age of Innocence,” and her thunderstorm portrayal in “White Oleander,” which I find to be her career-best work.

Unfortunately, since Pfeiffer took a break from acting in the early 2000s, she has struggled to find the roles again that would provide her the opportunity to dominate. Until now.

I recently saw “French Exit” as the closing title at the New York Film Festival. Because the festival was virtual and prior opportunities for people to see the movie early, a now-healthy sample size of Film Twitter and pundits have seen it. The response has been even more sharply divided than one would expect from the structure and style of the film. It has struck a nerve with audiences and there has been even less unification among subgroups of film fans than one would expect from a typical divisive, quirky dramedy that gets churned out annually. Therefore, right off the bat, despite the actual merits of “French Exit” or Pfeiffer’s performance, Sony Pictures Classics has an uphill battle in accordance with its Oscar campaign, which will inevitably be a force of nature.

However, as it concerns my take on “French Exit,” I fell for its charms. Azazel Jacobs’s take on a Woody Allen type of New York comedy with a twist is actually quite funny – there are at least ten moments of wicked humor which actually made me laugh out loud – and provides thorough character work throughout. It is the type of movie I could talk about the characters and the symbolism mounted within the story for hours. However, there is a lightness on the plot level where some will argue that little actually transpires from scene to scene. The lack of heaviness in the plot did not bother me because it accomplishes what it wants to be, which is entirely engrossing. Jacobs’s astute direction submerges the film in a specific atmosphere with an effective emotional reflection.

“French Exit” itself is a peculiar movie and therefore the mixed response is most probably justified. However, Pfeiffer’s work as the film’s protagonist is truly something great. She plays Frances Prince, who for better or worse comparison, is a compilation of Jasmine French from “Blue Jasmine” and Moira Rose from “Schitt’s Creek” yet with a darker twist than either character has. This characteristic of gloom is what makes Frances Prince an entirely fresh portrait in the cinematic scene and it is the ingredient that gives Pfeiffer the legs to manufacture one of the best performances of the year. Pfeiffer wraps Frances in the mystery, comedy, and sorrow. All the while she leans into the arrogance and entitlement that allows us to be captured by Frances, while also caught up in layers of discomfort.

Pfeiffer gives a truly memorable performance in “French Exit,” which is her best work since “Hairspray,” easily, if not in the past 20 years. Her illustrious career deserves an Oscar. If she were ever going to cash in on an overdue Oscar campaign, she delivers the substance in “French Exit” which could unduly justify an Academy Award. But Sony Pictures Classics and Pfeiffer are in a really tough position: critics and audiences unanimously agree on the quality of Pfeiffer’s outstanding performance, all the while “French Exit” is explicitly unanimous in the reception to the overall film itself. Because reactions are scattered, it will be difficult for Pfeiffer to overcome this reputation.

​That being said, Pfeiffer will not lie down quietly. I would expect her presence to loom over awards season, even if she does not make it across the final finish line at the Academy Awards. It is the type of performance that will show up with critics’ associations; there is even a world where she could win a major group, like say, New York or Los Angeles, depending on how on brand those critics groups fall with the winners. One theory that makes plausible sense is if Pfeiffer fulfills that one person who runs the gauntlet of major, televised precursors, but ultimately fails to check the final box, like Marion Cotillard in “Rust and Bone,” Tom Hanks in “Captain Phillips,” and Amy Adams in “Arrival.”

Her path to nominations at the precursors is very clear:

1. Golden Globes – Pfeiffer is a favorite of the Golden Globes and the Hollywood Foreign Press has the breathing room to separate performances by drama and comedy. “French Exit” will likely be classified as a Comedy/Musical and Pfeiffer will be a lock for a nomination in that scenario. Depending on the competition, she may even compete for the win, since the majority of the Best Actress contenders this year happen to be in drama films.

2. SAG – The Screen Actors Guild favors louder, overt type roles in early-released films of which people are aware months in advance of voting. Oftentimes, they will also throw in a strange, innocuous contender, like Helen Mirren for “The Woman in Gold.”

3. Critics’ Choice – This group votes on merit with nominations at times and I have faith they could compartmentalize their view of the film and Pfeiffer’s performance better than other groups. The Critics’ Choice Awards is an easier show to land simply because they offer six slots for nominees.

4. BAFTA – This is the precursor I feel least confident about her chances, but there is a lane with the European setting of “French Exit” and the general snob appeal the film exudes.
​
However, the Academy Award nomination could just be an inch too far. The trajectory for Pfeiffer will be interesting to see materialize. There is also a cynical scenario where she is simply acknowledged with a Golden Globe nomination and that is as far as this controversial film will allow her to go. Which will, unfortunately, leave her fans and people who respect her mark on the industry to continue to wait for a more audience-friendly film to ride to the microphone at the Dolby Theater.

What do you think? Do you think Michelle Pfeiffer will come back to the Oscars with “French Exit?” Check out our latest predictions for Best Actress to see who is predicting her at NBP and who is not. Let us know in the comments section down below or on our Twitter account.