An Ode To The Oscar Acting Losers Of 2019 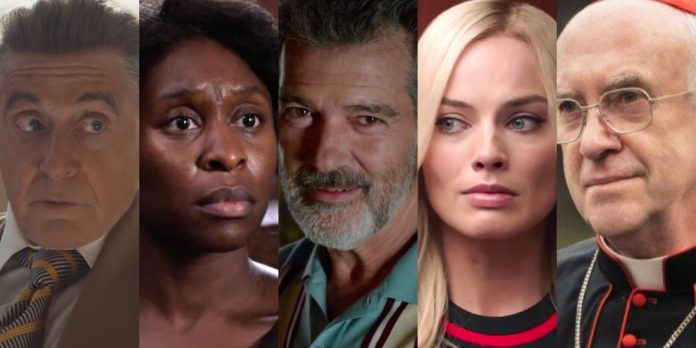 ​Well, the four-way acting sweep happened. At every major televised award show this year (except, bless, the Indie Spirits), the same four people won acting awards: Brad Pitt for Supporting Actor, Laura Dern for Supporting Actress, Joaquin Phoenix for Leading Actor, and Renée Zellweger for Leading Actress. Over and over again, the pattern played out. You’d think they were the only actors worth honoring this year! Of course, there are sweepers and people who get left behind, but in full sweep years like this and 2017 (kind of shocking that the last full sweep year was only the year before last), it’s especially painful when, with a rich field of contenders, awards bodies end up defaulting to the same four people time and time again.

So I thought it would be nice to have a memorial service for the performances left by the wayside this year, at least when it comes to the major awards ceremonies. A time to collectively mourn and celebrate the great performances of 2019 that got the shaft in everyone’s rush to reward the same old same old.

​
​Best Supporting Actor
Yes, we all love Brad Pitt, and we’re all happy he has an Oscar for acting. It’s hard to deny that this role is good to note as the one that won him an Oscar, encompassing as it does seemingly every facet of the screen persona that made him a megastar. But let’s pour one out for the Maritime madness of Willem Dafoe, pulling off the high-wire act of “The Lighthouse”’s mythological monologues with such aplomb that we’ll be using the clips and gifs for ages. And let’s shed a tear over Jamie Foxx’s performance in “Just Mercy,” a potent reminder that he’s one of the best actors around when he takes a part worthy of his talents.

We got to welcome back four supremely talented veteran actors to the awards circuit this year, starting with Tom Hanks. How wonderful that he finally got another nomination for playing such a warm hug of a character, and for turning in a performance that’s a little pricklier and a lot more interesting than anyone expected when his casting in “A Beautiful Day in the Neighborhood” was announced. Then there was Anthony Hopkins, given a late-career showcase in “The Two Popes” that feels like the first time the Oscar winner has challenged himself in decades. God bless Al Pacino, too, for modulating his overacting the perfect amount to give “The Irishman” the shot of adrenaline it needs to cross the three-hour mark with ease. God bless Martin Scorsese, also, for somehow getting Joe Pesci out of retirement, delivering the most restrained, nuanced performance of his career.

Best Supporting Actress
Laura Dern finally has her Oscar, and even if it’s for a one-note caricature she could play in her sleep, at least she plays that one note extremely well, and in a register only she could pull off. But you can’t forget Zhao Shuzhen, giving a performance so charismatic and natural that you’d never know “The Farewell” was her film debut. And Nicole Kidman, giving a master class in restraint in “Bombshell.” Not to mention Annette Bening, the most riveting in the moments when she’s processing all the information presented to her in “The Report.” And, of course, Jennifer Lopez, using her megawatt charisma in exceedingly cunning ways in “Hustlers” – easily her best performance since 1998’s “Out of Sight.”

How nice it was to have Kathy Bates back as a nominee this year, especially in a role with Oscar clips as strong as she got in the late-breaking “Richard Jewell.” Poor Scarlett Johansson, one of those rare double nominees that goes home empty-handed, and who gave a surprisingly sharp comic turn in “Jojo Rabbit” that still managed to tug at our heartstrings. Remember when it seemed like Florence Pugh might end this banner career year without an Oscar nomination at all? How sad those days before we saw her in “Little Women” were; those days before we knew just how well she and Greta Gerwig worked together to turn Amy March – that hated character in classic literature Amy March – into something of a feminist heroine; those days before we knew how slyly she modulated her voice and physicality to play both pre-teen and young adult Amy (and to think that was only two months ago!) And what to even say about Margot Robbie? She’s superb in not just one, but two supporting roles this year. Her angelic, free-spirited Sharon Tate in “Once Upon a Time In Hollywood” became the also-ran, but it’s just as good a performance (although it requires much less of her) as her heartbreaking turn in “Bombshell” where we watch in real-time as her Kayla gets everything she thought she wanted and realizes that what it takes to get it goes against everything she thought she knew and held dear. Stunning, multi-layered performances, all!

Best Actor
Joaquin Phoenix was a lock to win every award running from the day “Joker” premiered at the Venice Film Festival. His performance is the kind of magnetic method turn that draws admiration from even those who might dislike the film. But his steamroller flattened the chances of Christian Bale, for once having fun playing a cocky bastard in “Ford v. Ferrari”; Taron Egerton effortlessly providing his own vocals for his charismatic turn as Elton John in “Rocketman”; Eddie Murphy, dynamite as the always-hustling cockeyed optimist in “Dolemite Is My Name”; Adam Sandler curdling his brash comic energy into something almost otherworldly in “Uncut Gems”; and Robert De Niro turning in his most rigorous, powerful performance in decades in “The Irishman.” And those are just the Leading Actors who missed the Oscar nomination!

With “Pain & Glory,” Antonio Banderas is finally an Oscar nominee; fitting for his uncharacteristically restrained performance as a lightly fictionalized version of the director who made him a star, but the Academy’s love for foreign films couldn’t extend this far yet. Maybe if he hadn’t finally won his “overdue” Oscar for a role in which he ate raw bison liver (and made sure everyone knew it!), Leonardo DiCaprio’s tragicomic career-best performance in “Once Upon a Time In Hollywood” would have taken the top prize. In any other year, this award might have been Adam Driver’s to lose, given his unsparingly emotional work in “Marriage Story” as an egomaniac coming to terms with the fact that everything is not always about him, but it turned out to be someone else’s year. Jonathan Pryce has been having a career resurgence of late. And now after all these years, he finally gets to be called “Oscar nominee” thanks to his perfect sense of both comic and dramatic timing in “The Two Popes,” but alas, a win was not in the cards.

Best Actress
Everyone was so happy to see Renée Zellweger back on-screen displaying her talent and proving all her naysayers wrong in “Judy.” She now joins a very exclusive club of actresses who have won both Lead and Supporting Oscars, but doesn’t her name stick out like a sore thumb next to Streep, Lange, Blanchett, and Bergman (to name only a few)? Think of what could have been. Oscar usually loves comedians de-glamming into serious dramatic roles, but Awkwafina couldn’t make it to the finish line for her finely nuanced performance in “The Farewell.” Oscar also loves to crown the “next big thing” in this category, but despite her blistering turn and fierce vocals in “Wild Rose,” Jessie Buckley couldn’t find much love outside of her native U.K. Oscar has never loved horror films except when they’re both massive box office hits and instant cultural touchstones, which makes Lupita Nyong’o’s lack of nomination for her stunning dual turn in “Us” – the most fearless, ballsy, technically rigorous, committed performance of the year – hurt all the more.

Cynthia Erivo could have been the youngest EGOT ever, but she ultimately ended up having a better chance in Best Original Song than here, despite her quietly powerful performance in “Harriet.” After years of being one of the biggest movie stars on the planet, Scarlett Johansson sure didn’t need an Oscar for validation, but she sure deserved one for her anguished turn in “Marriage Story.” It’s the kind of performance that should serve as a reminder to directors everywhere that she became a movie star precisely because she’s one of her generation’s finest actors. With this Oscar nomination for “Little Women,” Saoirse Ronan is a four-time Oscar nominee at only 25 years of age – a feat only accomplished by Oscar winner Jennifer Lawrence. It’s a pity she didn’t win, as her Jo March encompasses the warmth, sass, and purity of emotion for which we’ve come to love her. After getting ignored by the Academy for two of the best performances of the past decade, Charlize Theron finally found her way back in another transformative performance, this time as Fox News anchor Megyn Kelly. Pulling double duty as a producer of “Bombshell,” Theron burrowed deep into Kelly’s skin and gave a fascinating portrayal of a flawed woman struggling with the decision to do the right thing, only to be met with a chorus of disapproval that the film didn’t treat its protagonist as the devil.

Sometimes, there’s just nothing you can do. A film opens, a narrative takes hold, an award is given, and everyone else falls in line for a coronation. We will never know how close any of these races were, and maybe, just maybe, they were closer than we all imagined. But for now, let’s have a round of applause, please, for all of these talented performers, victims of the Great Acting Sweep of 2019. May next year’s acting races be more interesting!

Would you liked to have seen different winners this year? Were you content with the four acting winners sweeping? Let us know your thoughts in the comments section below or on our Twitter account.