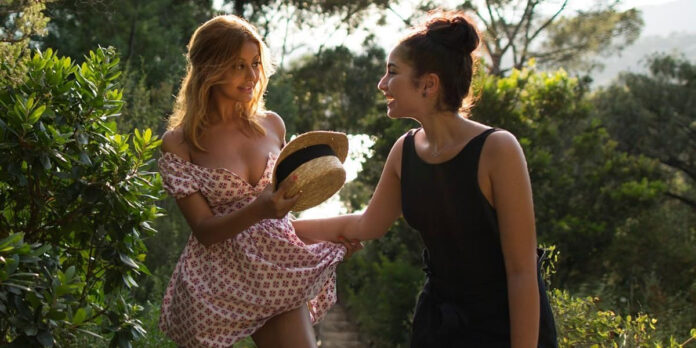 ​​​​​To enter the world in which young women live in front of the eyes of men is a game of performances. To appeal to the male eye is often to self-objectify, a skill many women are taught early on. France is a culture built upon a skewed idea of seduction, built on structures of gender, race, and class that allows mobility using the body as a currency, while also limiting society to this system. Coming of age in a world built upon eroticizing the female body is hard, especially navigating the first uneasy steps, and knowing where to stop. It’s easy to be taken advantage of, and there’s always the choice of whether to play the game or not.

“An Easy Girl” is the story of sixteen-year-old Naïma (played by newcomer Mina Farid), who spends the summer with her older cousin Sofia (played by model Zahia Dehar, infamous in France for relations with the national football team while underage), learning how to toy with the use of hyper-femininity to entrance men, and get what she wants from them. The two hop between yachts belonging to the wealthy, and she watches how Sofia uses her allure to them while always staying in control. She is the titular “easy girl,” open to relations with men physically, but it is notable how guarded she is without them noticing, not even eating in their presence, let alone opening up emotionally, as she maintains her image.

Director Rebecca Zlotowski casts North African actors here, allowing for cultural interplay in a nation that chooses to ignore its influence. As a foil to the wealthy men so easily entranced by a performance put on for them, Andres (Brazilian actor Nuno Lopes) is a gay man exempt from their game of seduction. He is somewhat wiser to this the way the girls are, as he does not wish to “seduce women” in the way the men drawn in by Sofia’s charms do. The film feels like a seventh Rohmer-ian moral tale, letting the social places of each character determine the power they are allowed to wield, and how they can profit off of, or be, the wealthy ruling class shown by the beaches.

Part of the film’s nuance comes through its use of acutely chosen cultural references to show the society in which these young women interact. There is a scene of the two cousins in a movie theater, where they go to watch Pascal Laugier’s New French Extremity classic “Martyrs.” They view a scene of the horror film in which a woman’s head is sliced open, and react calmly, desensitized to the graphic violence they are viewing (Zlotowski, however, has not seen the full film, despite working on scripts similar in the genre). When they return, they reenact it psychologically, slowly peeling back the layers of what runs through Sofia’s mind when she interacts with the men. She changes her favorite book daily, claiming Marguerite Duras to be her favorite author. It’s an intellectual pursuit the men around her see as far beyond her, and her selection of “The Lover” is particularly telling. It’s the story of a young girl’s relationship with an older man in French-colonized China, and she hardly notices how she shares the same power the young girl has in controlling her relations with the older men. This goes to implicate France’s culture of the desirability of youth, to the point of normalizing these power dynamics.

Does the film entirely subvert its heavy use of the male gaze to make it uncomfortable? No, but does it have to? Sofia’s body is often highlighted in a way that puts the viewer in the same lust as the wealthy men she seduces, and Zlotowski never drops the element of eroticization. This has been a consistent element in her films, in a 2011 interview on her debut Dear Prudence for Women and Hollywood, she mentions the ease she has with being able to comfortably depict the female body, saying “When it came to nudity, for instance, it was easier — even if I sometimes was like a man just wanting to see his actresses naked. But actresses would never suspect me, which is the luck when you’re a female director. You can do it very simply. You have no suspicion.”

This depiction may border upon fetishization for some, author Iris Brey saying in her critique of the film that “Zlotowski’s gaze lingers more on the construction of her femininity than on what Sofia feels by embodying this myth of an ideal woman.” She makes a valid point– the film only works as a feminist statement on the male gaze if we continuously view it from the point of view of Naïma, and we are often distanced into an unseen male eye.

Even if the film doesn’t make the strong personal statement on growing up in a world inherently fetishized that it could, “An Easy Girl” is incredibly indicative of Western society’s social trades of power. It’s interesting that the film has been picked up by Netflix, as it lacks the same broad crowd appeal as Zlotowski’s last film “Planetarium,” a Portman-fronted fantasy drama about two sisters who talk to spirits in the 1920s film scene, touching on the antisemitism of the era, also on the platform. It may draw the eye of a crowd labeling it as another French flick packed with nudity to ogle at, but at its heart, it is a peaceful coming-of-age tale about young women learning where they stand in the world, and making a choice to represent an ideal of femininity when they can use it for their own good, while never shaming those who choose not to.