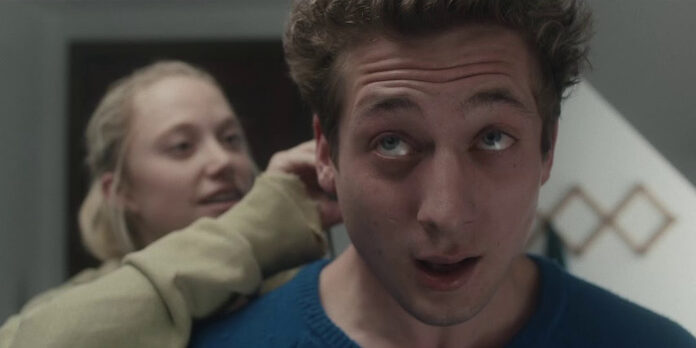 THE STORY – Elliot is a young and carefree New Yorker whose world gets turned upside down when he finds out that he has cancer. He soon finds comfort and happiness when he falls in love with Mia, a woman who sticks with him through the hard times.

​​“Young” is often a derogatory term when used to describe a film director. It can be used to criticize a film or to describe some sort of inexperience or immaturity seen in the film. With the directors of “After Everything,” their youth is a valuable asset in their favor. Directors Hannah Marks and Joey Power, also co-writers on the project, fill the film with a natural energy that never feels forced or false. “After Everything” succeeds with a great cast and smart direction.

23-year-old Elliot (Jeremy Allen White) has cancer. It’s a rare form of cancer that only affects one in a million. As he’s still awaiting his diagnosis, he meets Mia (Maika Monroe), the stranger lucky enough to be the first person Elliot tells about his cancer. Already this plot is in danger of devolving into melodrama, but this is no “The Fault In Our Stars.” Instead, the romance develops really naturally. Rather than dwell in the depression of the sickness, the film succeeds by crafting two natural characters who come together in the face of crisis.

Elliot works at a sandwich shop with his best friend Nico (DeRon Horton), but they’re “working on an app.” They hit the clubs most nights, smoke weed and play video games most days. Mia is working a boring job that she hates. They’re normal twentysomethings. When Mia and Elliot meet, their chemistry works right from the start. Every beat of their new relationship feels real and natural. As he begins his treatment, it’s scary and new. The fear of this now shared situation brings the two of them closer together than they ever would have been. This isn’t a normal relationship anymore.

Despite the unusual circumstances, the film develops their relationship so honestly. I believed every beat. This is a relationship in 2018, but not in an obnoxious “look at how young we are” sort of way. “After Everything” shows even the smallest moments with accuracy. Elliot and Mia share one of the most realistic texting conversations I’ve ever seen, complete with plenty of emojis and the three dots appearing, disappearing, and reappearing again. This is where Marks and Power shine. They know what relationships for twenty-somethings look like from the inside out.

Elliot and Mia also don’t know what they want. They’re young, and they weren’t looking for such a serious relationship, but they stumbled into it by accident. White and Monroe portray these characters with sincerity. Elliot was just looking for someone to party with. Mia was just trying to help Elliot cope with his cancer. The film does a fantastic job of showing us how the timeline of the relationship is understandably accelerated.

Stylistically, the film is naturalistic and energetic. Xander Singh’s synth-pop score helps push the film along with vigor. Title cards the appear periodically are colorful and crisp, and often funny. When Elliot decides it’s time to prepare for the end, we cut to a title: “Bucket List* (when you’re 23 and have no money).”

The first half or more of this movie is exciting, compelling, and interesting. Just like any relationship, the first few days and months are the most exhilarating and full of possibilities. The audience feels the same emotions that the couple is feeling, and we’re with them every step of the way. As “After Everything” progresses into the final half, and the couple begins to settle into their new reality, we lose a little steam. On the one hand, that feels natural and honest. That’s how real relationships, especially for a young couple, can be. For the audience though, we lose that excitement and energy that filled the first half. Still, that doesn’t take away from the power of the story.

“After Everything” is a remarkably honest, bittersweet, and fresh romance. It honestly depicts a relationship that’s at times both unique and all too familiar. This is a smart directorial debut from Marks and Power that you shouldn’t let fly under your radar this year.