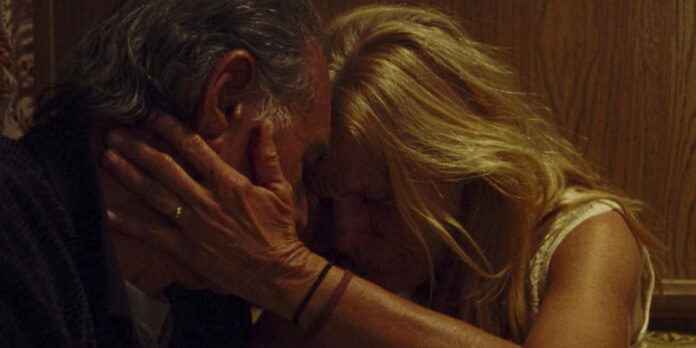 THE STORY – Two childhood sweethearts, now both widowed, share a night by a lake in the mountains. Reuniting after 40 years, the pair share childhood memories, make small talk and shelter together from loneliness.​

After turning in stellar supporting performances for decades in films like “Winter’s Bone” and “Hell or High Water” – winning the Independent Spirit Award for Best Supporting Female for the former – and shows such as “My Name Is Earl” and “True Blood,” Max Walker-Silverman’s “A Love Song” provides cherished character actress Dale Dickey with the lead role she’s always deserved. Here, Dickey is front-and-center in a small but sweeping romance centered around two childhood sweethearts coming together after years apart and potentially giving love a second chance since being widowed. Dickey’s Faye is right in her wheelhouse – a weathered but wise woman who speaks little but conveys so much with a glance- yet, the character also feels like new terrain for the long-working thespian, making the most of the profound material she’s been provided. The same goes for Studi, rarely given a part with this much tenderness to tear into. Above all else, “A Love Song” is a film overflowing with feeling – between the appreciation Walker-Silverman has for his actors and the consuming chemistry Dickey and Studi share. There’s no shortage of beauty to behold, making this an exceptional example of the sensitive, stripped-down storytelling independent filmmaking is known for.

From the start, we know what awaits Faye: the arrival of Studi’s Lito. However, given that it takes half the film for Studi to show up, that leaves us with quite some time to become acquainted with her, and Walker-Silverman doesn’t waste a single minute. Lesser writer-directors may have come up with some chaotic conflict to fill the time, but, thoughtfully, Walker-Silverman trusts his audience to be engaged simply by observing the ins and outs of Faye’s everyday life – and with a towering talent like Dale Dickey at his disposal, he was absolutely right to do so. Dickey inhabits this role with her entire being, proving indistinguishable from Faye; it is as if Walker-Silverman is more of a documentarian than a director, given just how genuinely believable Dickey is as this character. It’s not just her hardened exterior; it is the empathy she brings to her expressions and the authority she brings to her actions. We’re not just watching Dickey’s Faye do her daily chores; we’re watching a performer with purpose and a plan behind every movement and mannerism. Dickey is utterly unable to “sleepwalk” through her portrayal, thoroughly committed to making it as sincere as possible in every scene.

And even though we’re pushed to piece together the specificities of her painful past instead of having it explicitly explained to us, this never becomes an issue whatsoever, as all the answers lie in Dickey’s anguished visage. We palpably perceive the weight of her husband’s death and her absorbing anxiety that she’ll never be able to restart that spark of life again. But that is what makes Lito’s arrival so arresting; when Studi appears on screen, he is accompanied by emotions of exhilarant euphoria, a sentiment conveyed superbly by Dickey. At the same time, we – and Faye – know Lito may not be the solution to all of her suffering, but she’ll be damned if she doesn’t try. And looking at his soft smile, it is not hard to see why. Though it’s been years since the two were last together, that initial discomfort dissipates almost immediately, allowing these lost souls to open up and bare all to one another, bit by bit, with both Dickey and Studi dutifully delivering Walker-Silverman’s insightful dialogue. While we see far less of him than we do of Dickey, Studi is just as skilled at blending into the background of the climate Walker-Silverman curates here, creating a fully formed character in mere moments and quickly filling in the blanks of his forlornness. The two bring out the best in each other, and even though the time they share may be short, it also feels like the world stops spinning when they’re in one another’s orbit. Nothing else matters in all of existence except what transpires at this single site.

“A Love Story” may be compassionate to its core. Still, it is also firmly rooted in reality, leading to a resolution that, while resonant, is also masterfully melancholy, which still feels appropriate to the spirit of the movie in its entirety. The only slight shortcoming one may have with Walker-Silverman’s script is the time it takes to reach this resolution, but the passionate payoff is so wonderfully worth it that all complaints seem to clear out in seconds. And the path to this payoff is one Faye must walk alone, which not only affords the actress more time to advertise her astonishing introspective portrayal but also for cinematographer Alfonso Herrera Salcedo to have more opportunities to capture the luscious landscapes of this campsite and its surrounding country in all its grandiose glory. His cinematography is a constant source of wonderment throughout the whole film, but it truly reaches the peak of its power in the third act, where sights are used to say more than words ever could, an idea ingrained into the fiber of “A Love Song.”

If you’re looking for a picture with a propulsive plot or a staggering spectacle, “A Love Song” isn’t it. But that’s also not the film it is trying to be in any capacity. It’s not just a sympathetic ode to second chances and late-in-life love but also to an individual’s awe-inspiring ability to rebuild themselves after tragedy and find the passion for pushing on. It’s an emotionally enriching work of art with lessons that will linger long after the credits roll. It is not content to simply offer “in-the-moment” entertainment that’ll leave your mind the second the movie concludes. And that’s not even to say the film isn’t thematically fulfilling as it transpires as well, with Dale Dickey’s poignant and lived-in lead performance (a career-best) and Wes Studi’s softhearted supporting turn holding our attention from the first frame to the last thanks to the raw tenderness in their realization of these crestfallen characters. In the end, “A Love Song” is a movie with a pitch-perfect marriage between the artist’s intentions and the actors’ execution, and if you open your heart to the healing it provides, you’ll be rewarded handsomely.

Powered by JustWatch
Share
Facebook
Twitter
Copy URL
Previous article
The Next Best Picture Podcast: Episode 299 – The Best Films Of 2022 So Far, “Blonde,” “My Policeman” & “Persuasion” Trailers
Next article
“MARCEL THE SHELL WITH SHOES ON”