A Look At The Best Supporting Actress Oscar Nominees 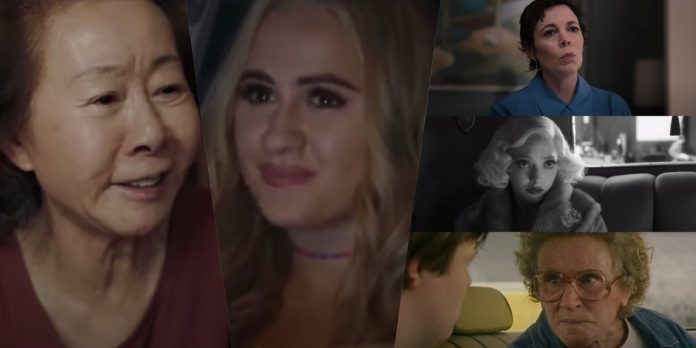 What a year! While both male acting races seem to be all sewn up with two frontrunners that very few can complain about, neither of the female acting races have an obvious winner at this point. Best Supporting Actress may not be quite as unpredictable as Best Actress (check out Ryan C. Showers’s piece on that category here), but there are still many ways it can go. Now that the SAG Awards are out of the way let’s take a look at each of the five women nominated for Best Supporting Actress and check in on their chances at this point in the race.

Maria Bakalova – “Borat Subsequent Moviefilm”
Before anything else, it needs to be acknowledged that Maria Bakalova is the only one of these five women to be nominated at all four televised award shows: the Golden Globes, the SAG awards, the BAFTAs, and the Critics’ Choice Awards. Frankly, critics love her, and it’s their affection for her performance that has landed her the vast majority of her wins so far. She won the Critics’ Choice Award and many major regional critics prizes like New York and Chicago. She’s second only to fellow nominee Youn Yuh-jung when it comes to critics’ awards. However, she has yet to win a non-critic award. She hit a significant roadblock at the Golden Globes, where she lost in the Lead Comedy Actress category to Rosamund Pike for “I Care a Lot.” This was unexpected, but having her lose to a non-competitor could be viewed as a moot point. But then the SAG Awards happened, and she lost to Youn Yuh-jung. At this point, there are several ways her awards trajectory can go. She could triumph at BAFTA, which would indicate support from a voting body that, like SAG, includes actual Academy members among their voters. If Youn and Bakalova were to each have an award from an Academy-inclusive voting body, they would essentially be walking into Oscar night with nearly equal chances on paper. If neither Youn nor Bakalova wins the BAFTA, I would say that bodes well for Youn’s Oscar chances, given her SAG triumph. The BAFTAs clearly loved “Rocks,” so Kosar Ali could easily triumph in their Supporting Actress race. Or Youn could win the BAFTA too, and be a fairly sturdy frontrunner.

So, in Bakalova’s favor is a great critic’s awards run and an impressive nomination haul from all four televised awards shows. But, she has yet to win a non-critics award, which indicates that other voting bodies are less enamored of her performance. Also, unlike Youn, she’s not in a Best Picture nominee. In the expanded era, only three women have won Best Supporting Actress for films not nominated for Best Picture: Alicia Vikander for “The Danish Girl,” Allison Janney for “I, Tonya,” and Regina King for “If Beale Street Could Talk.” Sure, there’s a case to be made that “Borat Subsequent Moviefilm” may have been very close to a Best Picture nomination, given its strong guild performance and somewhat surprising Best Adapted Screenplay nomination. Still, the fact of the matter is that it simply wasn’t. And finally, it can’t be ignored that Bakalova’s performance is unlike any other performance they’ve previously awarded. The closest obvious comparison is Marisa Tomei’s Oscar-winning work in “My Cousin Vinny,” but that comedic performance was nowhere near as gross-out and shocking as Bakalova’s. On the rare occasions that the Academy does award comedy, it’s usually for a film with real-life, dramatically-tinged themes, like Jennifer Lawrence in “Silver Linings Playbook” or Olivia Colman in “The Favourite.” In a race this tight, looking to the type of performance may offer more insight than it would in most years.

Glenn Close – “Hillbilly Elegy”
Many pundits, myself included, thought this would finally be Glenn Close’s year, reviews be damned. And when she managed to get nominated for all of the televised awards except BAFTA, it started to look like it might actually happen. But the fact of the matter is, she’s just not winning awards for this performance. It’s beginning to look like the very definition of “the nomination is the award.” Another wrinkle in her awards run is the way that overdue narratives usually play out. Almost always, this type of awards run is a complete steamroller all season long (Laura Dern for “Marriage Story,” Gary Oldman for “Darkest Hour,” Viola Davis for “Fences,” Julianne Moore for “Still Alice,” etc.) Now that she’s lost the SAG award, Close is going into the Oscars empty-handed. Considering she’s gotten much closer in terms of precursor awards in the past and still hasn’t managed to win, I think it’s safe to say that it’s not happening this year.

​Olivia Colman – “The Father”
Olivia Colman was one of the most reliable nominees all year for Oscar prognosticators. Even though most considered her chances of winning to be pretty slim, it was never in doubt that she would be nominated. The only major precursor she missed was, oddly, BAFTA. However, it’s safe to assume that she’s, at best, in fourth place this year. Having won just two years ago, it feels doubtful that the Oscars will go for her a second time (Colman herself even joked in her Oscar acceptance speech, “This is not gonna happen again”). The Academy generally takes a much longer time to give women a second acting Oscar than men – the last actress to do it in either category in less than ten years is Cate Blanchett, who went nine years between her wins for “The Aviator” and “Blue Jasmine.” While the Academy obviously adored “The Father,” given its large nomination haul, it’s unlikely that Colman will reap the benefits of their affection.

Amanda Seyfried – “Mank”
In any other year, Amanda Seyfried’s performance in “Mank” would be Academy catnip. She’s a well-respected industry player who’s worked with an array of respected directors while also being a favorite of general audiences, playing a real-life actress from Hollywood’s Golden Age. And even among critics who weren’t otherwise positive on the film, her performance was consistently singled out as a unique element. Early in the race, it seemed like she might have a shot. But unfortunately, she failed to land a nomination from either of the precursors that feature actual Academy members – SAG and BAFTA. Combine that undeniable stumble with the fact that, although it leads in the number of Oscar nominations this year, “Mank’s” star has fallen, and this won’t be Seyfried’s chance at the podium. However, it’s a great sign that the Academy likes her, and maybe on her next time around, she can succeed. That path worked for Emma Stone, Jennifer Lawrence, Natalie Portman, and plenty of other stars.

Youn Yuh-jung – “Minari”
I covered most of Youn Yuh-jung’s path to victory while discussing her closest competition – Maria Bakalova. But even still, it must be said that her chances are looking very good at this point in the race for her excellent work in “Minari.” She was the undisputed champ of regional critics prizes. She managed to show up as a nominee at every televised award show except the increasingly questionable Golden Globes. Her recent SAG win proves that she has strong support from the largest voting block of the Academy – the actors. Furthermore, her film is a Best Picture nominee and possibly the second or third most likely film to win the top prize (at this time, nothing is moving “Nomadland” from its perch). The Academy clearly loves the film and if they want to give it a win somewhere, honoring Youn’s equally hilarious and moving performance is the perfect way to do just that. It’s exactly the type of scene-stealing role they love to award in this category. Plus, hers would be a history-making win in its own right. She would be the first actor of Asian descent to win an Oscar in 36 years (the last person to do so was Haing S. Ngor for 1984’s “The Killing Fields”), and she would be only the second female actor of Asian descent to win after Miyoshi Umeki won for “Sayonara” a staggering 63 years ago in 1957. To put that into perspective, Youn was only ten years old when Umeki won. While the Academy has made efforts to increase both their members’ and their award recipients’ diversity, their history honoring Asian actors is a major blindspot. And while rewarding Youn wouldn’t change that fact, it would be a step in the right direction. Taking all of these factors into consideration, I’m confident in predicting Youn Yuh-jung to be the Best Supporting Actress winner at this year’s Oscars.

Who do you think is winning Best Supporting Actress at BAFTA and at the Oscars? Check out our latest predictions here. Let us know your thoughts in the comments section below or on our Twitter account.