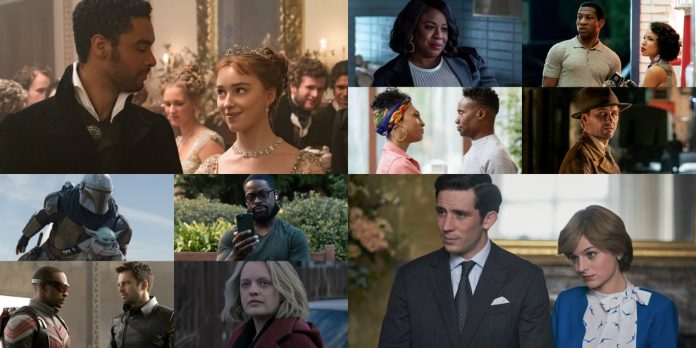 While the Comedy Series side was almost completely decimated because of COVID and multiple series ending, the Drama side was less affected. Last year’s winner, “Succession,” along with fellow nominees, “Better Call Saul,” “Killing Eve,” “Ozark,” and “Stranger Things,” are all sitting the 2021 Emmys out due to COVID and various other reasons. Still eligible from last year’s series nominees are the 2017 winner “The Handmaid’s Tale,” competing for its fourth season, surprise last year nominee “The Mandalorian,” and the presumed front runner “The Crown.”

Given that there are five open spots, it’s safe to assume the trio of eligible series from last year’s nominees are going to get in. Let’s see which series will join them to round out this category.​

Most likely to surprise: “The Falcon and the Winter Soldier,” “The Mosquito Coast,” “Perry Mason,” & “Ratched.”

“Bridgerton” and “Lovecraft Country” should be able to secure nominations for their respective first seasons after receiving SAG Ensemble nominations. “Pose” benefited in 2019 for its first season when most Drama series decided not to compete against “Game of Thrones’s” final season and could now benefit from an open field. Two series on the bubble with considerable hurdles to clear are “In Treatment” which has never received an Outstanding Drama Series nomination during its original run, and “This Is Us.” The hit NBC show received three consecutive nominations (2017-2019) before being snubbed last year. Despite this, they seem likely to return but, the two-time SAG Ensemble winner (2017-2018) did not return to the lineup after being snubbed in 2020. Their fellow actors preferred new shows instead, and the Television Academy may feel the same way again this year.

Most likely to surprise: Joseph Fiennes – “The Handmaid’s Tale,” Anthony Mackie – “The Falcon and the Winter Soldier,” Pedro Pascal – “The Mandalorian,” Justin Theroux – “The Mosquito Coast” & Milo Ventimiglia – “This Is Us.”

Last year’s Outstanding Lead Actor in a Drama Series winner, Jeremy Strong (“Succession”), along with fellow nominees, Jason Bateman (“Ozark”), Steve Carell (“The Morning Show”) and Brian Cox (“Succession”), will sit this year’s race out due to COVID and various other reasons. This leaves only Sterling K. Brown (“This Is Us”) and Billy Porter (“Pose“) remaining. Given that neither has missed for their respective series runs, it’s a safe bet that they will be amongst the nominees this year. The Emmy rules allow for a rolling scale of nominees depending on the number of submissions. Unlike the Comedy performer categories, the Drama performers will continue to have six nominees in both Lead Actor and Actress.

After winning the Golden Globe (Best Drama TV Actor) and receiving a SAG Award nomination, O’Connor is heading into this year’s nominations as the frontrunner; however, he could not obtain an Outstanding Supporting Actor in a Drama Series nomination last year. Does that spell doom for him again this year? “Bridgerton” breakout star Page, even after receiving a SAG Award nomination, would typically be on the bubble but he should be included in this year’s batch of nominees despite this. Other fringe contenders are Majors and past winner Rhys, neither of whom received a Golden Globe or SAG Award nomination, which may leave the door open for a surprise or two. Theroux was overlooked for “The Leftovers,” and while his latest show, “The Mosquito Coast,” hasn’t been as well-received, he could cash in on his I.O.U. card. It’s now or possibly never for “The Mandalorian” star Pascal who, unlike last season, does get more of an opportunity to act with his face as he takes the helmet off in the final two episodes. Also, be on the lookout for Fiennes. Had he submitted himself in supporting, he would’ve all but been assured a nomination if not a threat to win.

Most likely to surprise: Mandy Moore – “This Is Us,” Mj Rodriguez – “Pose” & Jurnee Smollett – “Lovecraft Country.”

Last year’s Outstanding Lead Actress in a Drama Series winner Zendaya (“Euphoria”), along with fellow nominees Jennifer Aniston (“The Morning Show”), Jodie Comer (“Killing Eve), Laura Linney (“Ozark”), and Sandra Oh (“Killing Eve”), will all sit this year out due to COVID and various other reasons. This leaves only Olivia Colman (“The Crown“) as still eligible for this year’s nomiantions. She should be one of the nominees after receiving a Golden Globe and SAG Award nomination, not to mention an Oscar, Golden Globe, and SAG Award nomination for the film Oscar-winning film, “The Father.”

This race will ultimately come down to “The Crown” ladies: Colman as Queen Elizabeth II and Corrin as Princess Diana. Like her onscreen husband O’Connor, newcomer Corrin won a Golden Globe and received a SAG Award nomination. After being snubbed last year, Moss should be able to make a comeback for her incredibly strong work this season. Emmy favorite Aduba should also receive her first lead nomination this year. Paulson is a proven Emmy favorite on one of their favorite streamers (Netflix) and could receive a nomination, which would not be on the Limited Series side for a change. Dynevor is close, but she’s on the hottest show on Netflix currently and could go along for the ride. Rodriguez had a great final season on “Pose;” however, no one but Porter has been able to secure a nomination.

Again, last year’s Outstanding Supporting Actor in a Drama Series winner Billy Crudup (“The Morning Show”) and fellow nominees Nicholas Braun (“Succession”), Kieran Culkin (“Succession”), Mark Duplass (“The Morning Show”), Giancarlo Esposito (“Better Call Saul”), Matthew Macfadyen (“Succession”) and Jeffrey Wright (“Westworld”) will all sit this year out due to COVID and other reasons. That leaves quite a lot of openings in this category. Past Emmy favorite Whitford will still be eligible. While he doesn’t have as much to do this season, he should again receive a nomination. Unlike the Comedy Supporting races, which were reduced to six nominees, the Drama Supporting races will remain at eight nominees.

While there are still eight spots, the competition doesn’t feel as competitive in a typical year. Esposito and Lithgow should join Jonathan Banks as only the second and third actors to compete in this category for two different characters/series. Character actor Menzies, like previous Prince Philip actor Matt Smith, should receive a nomination. Menzies may be in a great position to win as he appears in the Drama Series frontrunner and his performance acts as a touching tribute to the real Prince Phillip after his death. Williams should be able to secure a nomination even with questionable support of “Lovecraft Country.” Ramos is in the midst of his breakout year and shows off his impressive range in “In Treatment.” Hickey has been the standout of “In Treatment” and should also number amongst the nominees. Who will receive the eighth spot? I’m not sure. There are multiple problems for all of the actors vying for that spot. Is Bailey memorable enough to receive a nomination? For Bruhl and Lumbly, are enough people watching “The Falcon and the Winter Soldier?” Can Kinnaman receive a nomination for not playing one of the patients? Why now for Fagbenale, Minghella, or Hartley? Ultimately, I chose 2019 nominee Sullivan because he’s been singled out before—I just hope I’m wrong.

Finally, last year’s winner Julia Garner (“Ozark”) and fellow nominees Laura Dern (“Big Little Lies“), Thandie Newton (“Westworld”), Fiona Shaw (“Killing Eve”), Sarah Snook (“Succession”) and Meryl Streep (“Big Little Lies“) are all sitting out this year. This leaves only Helena Bonham Carter (“The Crown“) and Samira Wiley (“The Handmaid’s Tale”) as the ones who are still eligible. Wiley has received a nomination for every season, so she should again be nominated. Bonham Carter received a Golden Globe and SAG Award nomination, so she too should also be nominated for her final season as Princess Margaret. Keep in mind there will still be eight nominees.

In 2018, “The Handmaid’s Tale” was able to get another trio of ladies nominated. However, this was after the series won Outstanding Drama Series the previous year. We also know the Television Academy is okay with nominating multiple ladies from the same series as they did in 2019 when “Game of Thrones” took up four spots. Yes, that was for the final season, but the competition was slim as most series decided to sit that year out. This gives Doherty, who plays Princess Anne, a hopful chance to be nominated alongside her co-stars. Fennell, who’s had a great year playing Camilla and winning an Oscar for Best Original Screenplay (“Promising Young Woman“), should also be hearing her named called on nomination morning as Maslany will try and hold off the competition to occupy the final spot.

This year’s Drama Guest Actor and Actress will only have five nominees like the Comedy Guest races. So who is coming to the party? One could call this category the Ghost of Emmys Past as Angarano was previously nominated in this category in 2019, Olyphant is also a past nominee for Outstanding Lead Actor in a Drama Series for “Justified” in 2011 and Vance is a past winner for Outstanding Lead Actor in a Limited Series/TV Movie for “The People vs. OJ Simpson” in 2016. After being suspiciously snubbed last year (and for every season he was a part of “Game of Thrones“), Dance should earn a nomination this time around as his character’s death sets the fourth season of “The Crown” in motion. Then looming over the category is the Jedi Master himself: Luke Skywalker. Hamill, who has never received a competitive acting nomination, appears as the younger Skywalker in the season finale and could take a slot based on his star power alone. Should “The Mandalorian” become a major Emmy player this year, look for Weathers to ride the wave of momentum into a nomination as well.

Bledel has been nominated for every season of “The Handmaid’s Tale” so I see no reason why she shouldn’t be nominated again. Same with Rashad, as she’s been nominated for the past two years consecutively in this category. She’s never won a competitive Emmy and is hoping the third time will be the charm. Foy returned to “The Crown,” setting up Queen Elizabeth’s devotion to the Commonwealth and the present set conflict with Margaret Thatcher, so that could be a recipe for anomination. Louis-Dreyfus is a past Emmy favorite and should be able to sneak her way into the lineup given how much they love her. Grace has been stunning audiences for awhile now and gives a stellar performance beyond her years which is worthy of a nomination. Look out for Dawson! If “The Mandalorian” overperforms, she could be amongst the nominees too. Also, beloved legend Rigg could score a posthumous nomination for “All Creatures Great and Small.” We’ll see how it all shakes out this Tuesday.

The 2021 Emmy nominations will be announced on July 13th 2021. Check out my other nomination prediction articles for Limited and Comedy Series if you have not done so already. What do you think will be nominated in the Drama Series categories at the Emmys this year? Let us know in the comments section below or on our Twitter account.