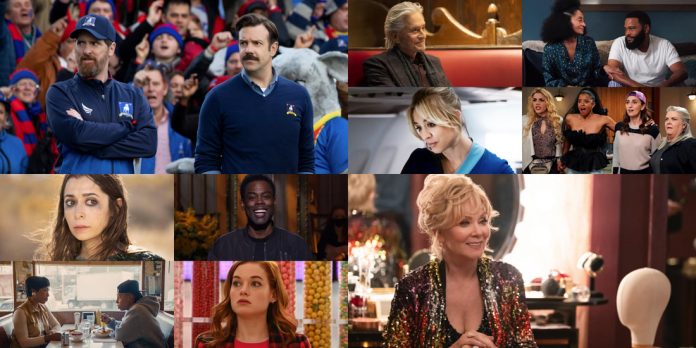 Last year’s Emmy winner for Outstanding Comedy Series, “Schitt’s Creek,” competed for its final season, making history as the first continuing series to sweep the top seven awards. Also competing for its final season last year was “The Good Place.” Fellow nominees “Curb Your Enthusiasm,” “Dead to Me,” “Insecure,” “The Marvelous Mrs. Maisel,” and “What We Do in the Shadows” haven’t aired a new season during the eligibility period mainly due to COVID. This leaves only “The Kominsky Method” as still eligible for this year’s nominations. Even with fewer laughers competing at the 2021 Emmys, there will still be eight nominees in the Outstanding Comedy Series category. What will they be?

Assuming that “The Kominsky Method” will be nominated for its final season, seven spots remain. After receiving Golden Globe, critical SAG nominations, and showing up at various other guild awards, “Ted Lasso” and “The Flight Attendant” are all but certain to number amongst the nominees, with Apple’s “Ted Lasso” currently standing as the expected frontrunner. Newcomers that are looking to make their awards debut include “Hacks,” “Made for Love,” and “Girls5eva.” “Girls5eva” is the most vulnerable to be left out as it will be the debut for the Peacock Streaming service from NBC. This will test how savvy Emmy voters are to new services and shows during a year when they can’t default to their traditional favorites. Meanwhile, looking to benefit from COVID taking out some of the typical top competitors are “Black-ish” and the revamped “Master of None.” Be on the lookout for the recently canceled “Zoey’s Extraordinary Playlist” to possibly surprise if voters feel the show was unjustly canceled.

Last year’s Outstanding Lead Actor in a Comedy Series winner Eugene Levy (“Schitt’s Creek”) and fellow nominee Ted Danson (“The Good Place”) competed for their series respective final seasons. Also ineligible due to COVID from last year’s nominees are Don Cheadle (“Black Monday”) and Ramy Youssef (“Ramy”). This leaves only Anthony Anderson (“Black-ish”) and Michael Douglas (“The Kominsky Method”). Given that neither has missed for their respective series runs, it’s a safe bet that they will be amongst the nominees. But after this, things get a little complicated on the Comedy Side. The Emmy rules allow for a rolling scale of nominees depending on the number of submissions, which means that there will only be five nominees for both Lead Actor and Actress this year.

After winning the Golden Globe and SAG Award, Sudekis enters the race as the frontrunner. But SAG + Globe does not typically equal Emmy. With the competition weaker than usual, Macy will look to make the lineup for the final season of “Shameless.” Thompson is playing the long game, hoping to score double nominations for Lead and Supporting Actor in a Comedy Series (translating, he hopes, to a win most likely in Supporting). However, fellow “SNL” alum Amy Poehler was in a similar situation in 2009 for the debut season of “Parks and Recreation,” but was only able to get the Supporting nod for “Saturday Night Live.” Danson looks to one-up his place in comedy history by being the first Lead Actor nominated for three different series: “Cheers,” “The Good Place,” and “Mr. Mayor.” The question is: Has anyone seen his latest series?

Last year’s Outstanding Lead Actress in a Comedy Series winner Catherine O’Hara (“Schitt’s Creek”), competed for her series final season. Ineligible due to COVID from last year’s nominees are Christina Applegate (“Dead to Me”), Rachel Brosnahan (“The Marvelous Mrs. Maisel”), Linda Cardellini (“Dead to Me”), and Issa Rae (“Insecure”). This leaves only Tracee Ellis Ross (“Black-ish”) left to compete for a nomination this year. Given the state of the race, she should once again receive a nomination. Keep in mind there are only five spots available.

After scoring both Globe and SAG nominations, Cuoco was the presumed frontrunner. However, that was until Smart entered the race, and now she could easily play spoiler to Cuoco. Janney will try and score a goodbye nomination for “Mom.” Still, the television academy snubbed her for Lead Actress in a Comedy Series and Supporting Actress in a Limited Series/TV Movie (“Bad Education”) last year. “Girls5eva’s” Bareilles and Goldsberry could cancel each other out of the race. Lookout for Levy, trying to score a conciliation nomination after her series was canceled.

Last year’s Outstanding Supporting Actor in a Comedy Series winner Dan Levy (“Schitt’s Creek”) and fellow nominee William Jackson Harper (“The Good Place”), competed for their series respective final seasons. Also ineligible due to COVID from last year’s nominees are Mahershala Ali (“Ramy”), Alan Arkin (“The Kominsky Method”), Andre Braugher (“Brooklyn Nine-Nine”), Sterling K. Brown (“The Marvelous Mrs. Maisel”), and Tony Shalhoub (“The Marvelous Mrs. Maisel”). This leaves only Kenan Thompson (“Saturday Night Live”) still standing. Again, let’s operate under the assumption that he’s getting nominated this Tuesday. Things will be a little messy this year on the Comedy Side due to the fact that the Emmy rules allow for a rolling scale of nominees depending on the number of submissions, which means that this year there will only be seven nominees for both Supporting Actor and Actress.

How many of the seven spots will “Ted Lasso” occupy? That’s the big question hanging over the race for Outstanding Supporting Actor in a Comedy Series. They could easily occupy up to five, but look out for the two other nominees to fight to the death for the trophy if that’s the case. Joining Thompson could be scene-stealer Yang, the first Asian cast member of “SNL,” which could cause vote-splitting problems amongst themselves.

Last year’s Outstanding Supporting Actress in a Comedy Series winner Annie Murphy (“Schitt’s Creek”) and fellow nominees D’Arcy Carden (“The Good Place”) and Betty Gilpin (“GLOW”) competed for their series respective final seasons. Also ineligible due to COVID are Alex Borstein (“The Marvelous Mrs. Maisel”), Marin Hinkle (“The Marvelous Mrs. Maisel”), and Yvonne Orji (“Insecure”). This leaves only Kate McKinnon and Cecily Strong (“Saturday Night Live”) still in the race. Given the state of the race, let’s just count them in for nominations. Keep in mind there will only be seven nominees this year.

Can anyone stop Waddingham? The answer is no, even with costar Temple as a possible nominee as well. She’s clearly the number one choice from the ladies of “Ted Lasso.” The question is, what six other ladies will number amongst her competitors? Here’s hoping Einbinder and her millennial canceled writer will be amongst the nominees.

Like the Lead Actor and Actress race, this year’s Guest Actor and Actress will only have five nominees. As is usually the question every year: How many of the five spots will “Saturday Night Live” occupy? Three has been the maximum in recent years, but with competition a little on the light side this year, they could easily occupy four or even all five.

Rudolph and her impression of Vice President Kamala Harris will try and make it two wins in a row for her. However, this could be more complicated as only Jean Smart (“Frasier”) has been able to win this category back to back in 2000-2001. Wiig and Fey are both frequent nominees in the Guest Acting race, and they should once again count as nominees this year. Depending on how much the television academy loves “Ted Lasso,” Anders could readily take one of the five spots. Look out, though, for Dench in “Staged” (available to stream on Hulu). It may not be as well-known of a show, but the academy has been known to name-check big names in the Guest races.

The 2021 Emmy nominations will be announced on July 13th 2021. Check out my other nomination prediction articles for Limited and Drama Series if you have not done so already. What do you think will be nominated in the Comedy Series categories at the Emmys this year? Let us know in the comments section below or on our Twitter account.