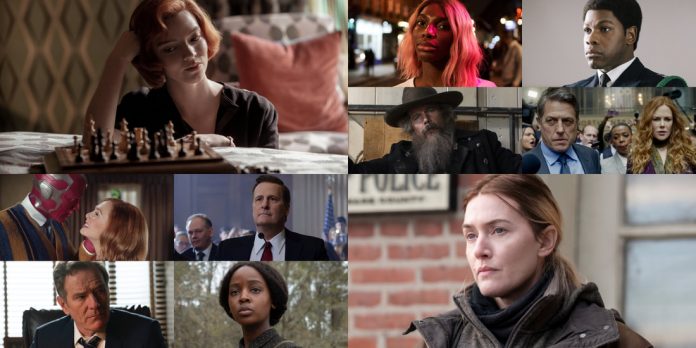 Only one question hangs over the Outstanding Limited Series races this year: Can any series challenge “The Queen’s Gambit?” The hit Netflix miniseries got off to an impressive start sweeping through awards season with wins at the Golden Globes, Critics Choice, SAG, PGA, DGA, and WGA Awards; however, this was in the spring, and a lot of time has passed. “Angels in America” (2004) went on the same tear-through awards season, and even though they had to wait to see if their competition would step up, they went on to make history as the first Limited Series to sweep the top seven awards. “The Queen’s Gambit” will not sweep the top seven since it doesn’t have a Lead Actor. But even with months since it debuted, it remains the frontrunner, and should it win, it would be the first streaming Limited Series to win. Keep in mind that Amazon and “The Marvelous Mrs. Maisel” were the first to win Outstanding Comedy Series (2018). Hulu and “The Handmaid’s Tale” were the first to win Outstanding Drama Series (2017).

Simply put, Netflix wants this badly as it is the last category a streamer hasn’t won. Also, keep in mind that Netflix’s “The Crown” is the frontrunner to win Outstanding Drama Series. Should Netflix win for Limited Series, they would be the first streamer to win two series awards in the same night, potentially making it the premier streaming provider in the streaming wars.

Even with COVID crippling the industry, there will once again be only five nominees in this category. What will they be?

“Mare of Easttown” from HBO will be “The Queen’s Gambit‘s” toughest competitor. HBO is formidable and not to be underestimated with 11 wins in this category— the most from any network. Latecomer “The Underground Railroad” from Amazon, should also easily make the list. “WandaVision” and its multiple different sitcom styles will need the help of the below-the-line categories if it’s going to make the top category. “Small Axe,” an anthology of movies, may be left out of this competitive race due to its unique structure and early release date. Should “Fargo” be snubbed, it will end FX’s eight-year run of either being nominated or winning this category.

The Limited Lead acting races will each have five nominees; even the pandemic couldn’t prevent the competition from getting nail-bitingly tough this year. Hawke and Grant spent the early part of this awards season losing to last year’s Emmy winner Mark Ruffalo (“I Know This Much is True”). They’re hoping to win an Emmy like Riz Ahmed (“The Night Of”) did after losing at the Globes and SAG Awards in 2017. Cranston is an Emmy favorite and should secure a nomination even if most viewers found “Your Honor” disappointing by the end. How will Disney+’s “Hamilton” perform? Many are comparing it to 2018’s “Jesus Christ Superstar Live in Concert,” but the difference between the two is “Hamilton” was previously recorded, and that could be the difference in it showing up here or not.

This race will ultimately come down to Taylor-Joy and Winslet. But there are five spots to fill. Olsen and Mbedu are the most vulnerable as their respective series are impressive technical wonders, and their performances could be overlooked. If that’s the case, look out for Emmy favorite Kidman to sneak in.

Consistency is nice in a topsy-turvy year, like the one most of us had. That being said, Limited Series Supporting races will once again have six nominees apiece. Boyega may be vulnerable after quitting the film “Rebel Ridge” while in production. However, the recent Golden Globe winner is not likely to feel any negative effects after the nomination process. In the race between “The Queen’s Gambit” and “Mare of Easttown,” this is one category to keep an eye on. Camp, after receiving a SAG Award nomination, should easily occupy one of the six spots. Meanwhile, Peters is on the bubble, and a past winner in this category, Pearce (“Mildred Pierce, 2011), would need for voters to really rally around “Mare of Easttown” for him to receive a nomination. So why am I predicting Brodie-Sangster? As they say in real estate: location, location, location. Brodie-Sangster appears on the same ballot page as Camp, and if voters are checking off Camp, they could easily check him off as well. Harper should follow his Outstanding Comedy Supporting Actor nomination last year (“The Good Place”) with a second nomination for “The Underground Railroad.” That is if voters got to the end of the series when Harper appears. Every year a SAG Award nominee fails to receive an Emmy nomination, and this year’s most likely is Diggs, who will appear on the ballot twice for both “Hamilton” and “The Good Lord Bird.”

Hahn, Heller, Wright, and Smart all seem locked to receive a nomination. Hahn is the expected frontrunner, but her performance is comedic, and that could hurt her chances if/when she receives a nomination. Smart needs this nomination to prove she’s got the support to win Outstanding Comedy Lead Actress for “Hacks.” Nicholson, who’s hoping voters saw her heartbreaking tour de force performance in the series finale, is on the bubble. Season four of “Fargo” may have been the weakest to date, but Buckley still gave a commanding performance as a Nurse/Serial Killer. But will voters still remember? If “The Queen’s Gambit” is the frontrunner to win the Limited series, then Johnston, who plays young Beth Harmon in the first episode, should be on everyone’s radar to surprise. Johnston benefits as she appears in the first episode, and since we expect they’re tuning in to see Camp’s performance, voters should take notice of her skillful performance beyond her years.

The 2021 Emmy nominations will be announced on July 13th 2021. Check out my other nomination prediction articles for Comedy and Drama Series if you have not done so already. What do you think will be nominated in the Limited Series categories at the Emmys this year? Let us know in the comments section below or on our Twitter account.