10 Female Directed Movies You Should See 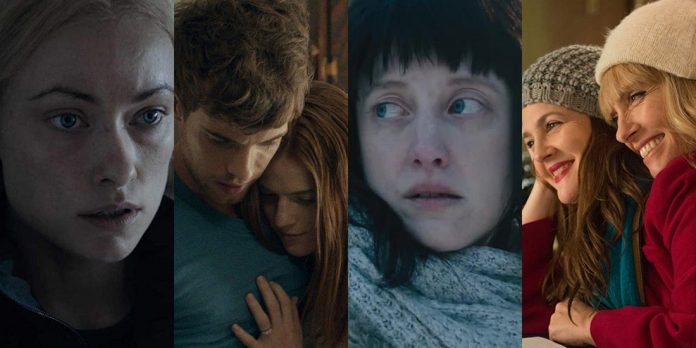 ​Happy Female Filmmaker Friday everyone! Within the last few years, there has been an immense social shift in Hollywood regarding female directors. Today, we now see major studios hiring female directors and including that aspect as a major part of their marketing strategy, especially this past awards season with “Hustlers,” “The Farewell,” “Honey Boy,” and “Little Women,” for example. It’s safe to say that Hollywood is making positive strides in this gender battle.

But what about the films directed by women before this cultural shift? There are female-directed films that were made long before 2019 that are equally as good as the ones that are being made today. But for some reason, no one saw them due to a lack of support or a lack of promotion. They either got lost in the streaming universe or were in and out of theaters too quickly. So, in no particular order, here are ten female-directed films everyone should see.

Note: Every film on this list currently has a view rating of 20,000 or less on Letterboxd.

Before she was terrifying us in “Hereditary,” and before she was eating people in “Santa Clarita Diet,” Toni Collette and Drew Barrymore were best friends in Catherine Hardwicke’s “Miss You Already.” The two play life-long best friends whose relationship is challenged when one of them is diagnosed with cancer.

The film, which made its debut at the Toronto International Film Festival, is funny, emotional, and heartfelt. Both Barrymore and Collette play their parts well with chemistry that bounces off the walls. With the storyline, the film can be dramatic and even cheesy at times, but at its core, it’s real, authentic, and made with love that’s poignant from the first to last shot. Let’s be honest, it’s still a rarity to see a film centered around female friendship, which makes “Miss You Already” a rare gem that deserves to be seen.

Did you know that the inventor of the lie-detector also created “Wonder Woman” with his wife and their girlfriend in the 1930s? (Polyamory rights!) Well, not many did, but leave it to writer/director Angela Robinson to take this concept and make it an honest, genuine, and pure love story.

Anyone could make a film about polyamory that either turns people on or off, but Robinson does the impossible: She introduces us to our leads and allows their love story to grow, so by the time they are a couple, it seems only natural. The fact that “Professor Marston & The Wonder Women” is intelligent, thought-provoking, romantic, and emotionally engaging while paying respect to the real individuals in the relationship, just proves how one in a million Robinson truly is.

People either love or hate “Nancy,” which is why I think it’s so special. The Sundance film follows a young woman (Andrea Riseborough) who notices that she somewhat resembles a young girl who was kidnaped. She contacts the missing girl’s parents (Steve Buscemi and Ann Dowd) in an attempt to reunite.

Like “Wendy and Lucy,” Christina Choe, in her directorial debut, successfully tells a real and raw story about loneliness. It’s specific yet layered with ambiguity, and eerie but also somber. At the end of the day, everyone needs human connection, which is what all three of these characters have been living without for so long. So what happens when they all conjugate in the same space? Will they remember how to bond with one another? For those who love a slow burn character study on loneliness, with three very different characters, “Nancy” is your film.

Premiering at the South by South West film festival, Leigh Janiak’s directorial debut is one of the decade’s hidden gems. The story centers around a young couple, Bea (Rose Leslie) and Paul (Harry Treadaway), who vacation to a remote lake house for their honeymoon where things aren’t what they seem to be. With “Honeymoon,” Janiak is able to tell a fascinating yet scary story that has a deeper message than your typical horror flick.

Through this little film, Janiak asks the audience, what happens to a person when they get married? What changes them? Is it really for better, or for worse? Janiak’s answer, in combination with Leslie and Treadaway’s chemistry, is terrifying, amazing, and a feminist crowd pleaser.

Before she was stealing everyone’s hearts with “Portrait of a Lady on Fire,” Céline Sciamma was already putting her mark on cinema with “Tomboy.” The French coming-of-age film centers around a 10-year-old who presents themself as a boy named Mikäel.

Through Mikäel’s lens, Sciamma is able to explore that fine line between childhood and adolescence, while exploring the idea of gender. Sciamma tackles this plot extremely well and instead of making a film only about gender identity, “Tomboy” explores everything weird about being a pre-teen, helmed by the fabulous Zoé Héran. But at its core, “Tomboy” is a film about growing up into exactly the person you always knew you were, the brevity it takes to make that first step, and unconditional love between friends and family.

Originally debuting at the Venice Film Festival, and eventually finding a home at Amazon after its festival run, “The Fits” takes a close look at female adolescence. The film centers around young Toni (Royalty Hightower) who spends the majority of her time in the city’s community center boxing with her brother. She suddenly takes interest in the girls’ dance team and begins to assimilate into the jungle arena of adolescent girls. But as the days go on, most of the girls experience episodes of fainting and seizure-like activity. No one knows the reason for the girls’ episodes, but it’s quickly seen as a rite of passage for the girls at the center.

Through this interesting concept, Holmer gets to investigate female adolescence. It’s scary, haunting, and also an experience that comes out of nowhere that leaves you feeling out of control. At the same time, Toni is still in-between the worlds of boxing and dance. She’s trying to figure out who she is, who she wants to be, and in order to be accepted as “one of the girls,” she’ll do anything to fit in.

Most people know Michelle Williams for her performances in “My Week With Marilyn” and “Fosse/Verdon” or her scene-stealing roles in “Manchester By the Sea” and “Brokeback Mountain,” but “Wendy and Lucy” deserves a spot on this ever-growing list.

The film, which premiered at the Cannes Film Festival in 2008, follows Wendy (Williams), a lost soul who’s only prized possession is her dog, Lucy. But when Lucy is taken way from Wendy, she does everything she can to get her back. “Wendy And Lucy” lives in its silent moments that are brilliantly anchored by Williams. The film (also written by Reichardt) addresses loneliness, isolation, and the dangers of being a woman that is completely alone. It’s a character piece, a cautionary tale, an assessment of our world’s cruel nature.

Before making her upcoming MCU debut with “Black Widow,” Cate Shortland was winning several awards for her 2012 film “Lore.” The Australian-German film, follows a German teenager, Hannelore “Lore” (Saskia Rosendahl), at the end of the Second World War. Her parents are arrested for war crimes and she’s now responsible to take her and her young siblings across Allied-occupied Germany to the safety of their Grandmother’s house.

“Lore” isn’t like every other World War II film. Shortland uses the point of view of Lore to discuss the loss and corruption of a child’s mind and the fight to gain it back. Before her journey, Lore wasn’t aware of what her parents and country were doing, but through said journey, she’s finally shown the truth and has to deal with the burden of realizing that her parents and country lied to her. With a sturdy cast, a great script (also penned by Shortland), and fantastic cinematography by Adam Arkapaw, “Lore” is a unique coming-of-age film that shows the grey shadows of the human experience that no one seems to talk about.

“A Vigilante” is dark, exposing, extremely raw, and powerful. It deals with domestic abuse at its core and doesn’t cover anything up. Dagger-Nickson directs and writes Wilde a career-best performance that’s heartbreakingly honest. It’s a great character piece about abuse, PTSD, obsession, and revenge. If there’s one thing for sure, look out for Sarah Dagger-Nickson’s next piece, she’s only getting started.

Directed by So Yong Kim

“Lovesong” premiered at the Sundance Film Festival in 2016 and was distributed to Netflix in 2017. It tells the story of Sarah (Riley Keough), a young mom who is abandoned by her husband with their small child. Out of desperation, she calls her friend, Mindy (Jena Malone) for help. The two rekindle and attempt to navigate the unspoken attraction between one another.

Unlike most love stories, “Lovesong” finds its way through silent moments; meaning, the sparks happen when both Mindy and Sarah steal hidden glances from each other or lock eyes for just a little too long instead of a big speech declaring their love. With fantastic performances from both Keough and Malone, “Lovesong” is a beautiful little film that says so much in silence. It’s a film that explores the queer experience in modern rural America but also navigates the inevitable consequences of the choices that we make, or don’t.

How many of these female directed films have you seen? Are there any others you would recommend? Let us know your thoughts in the comments section below or on our Twitter account.