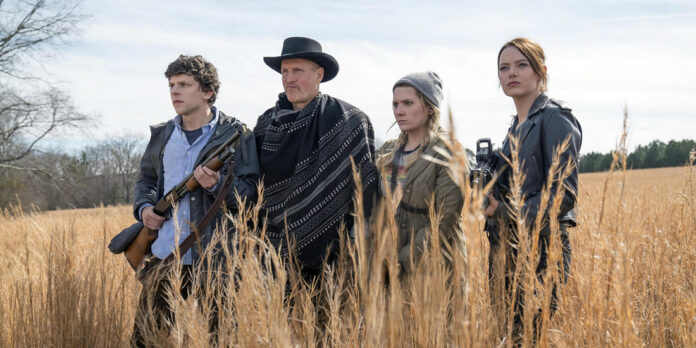 ​​​​I guess this would be me nutting up, instead of shutting up? Because I have some thoughts on the (at least) 5 years too late sequel to 2009’s surprise hit comedy “Zombieland.” With the original cast returning, along with the original director and writers, “Zombieland: Double Tap” may feel like a warm and fuzzy reunion with old friends. For me though, outside of a game and exuberant cast, the jokes mostly felt recycled and the storyline felt too inconsequential for me to ever care that much. “Zombieland” captured lightning in a bottle with its stylish direction and memorable characters in 2009, but here we are a decade later and the world has changed. Despite a clever opening animated sequence involving the Columbia Studio logo, a confusing and muddled attempt at putting forward some sort of “anti-gun” message, and some fresh blood in the cast who add a few tiny humorous moments, “Zombieland: Double Tap” feels tired and tapped out.

It’s been a while since we last saw our zombie-killing friends Tallahassee (Woody Harrelson), Columbus (Jesse Eisenberg), Wichita (Emma Stone) and Little Rock (Abigail Breslin) in “Zombieland.” They are all now living comfortable lives in the abandoned White House on 1600 Pennsylvania Avenue in Wahington D.C. Columbus is desperate to make a nest egg for himself and start a life with Wichita, who he proposes to. Little Rock is feeling an overwhelming presence from her father figure Tallahassee and together, the two sisters decide to leave behind the two men behind. Now, on the road, the two groups encounter new friends and new enemies as a new breed of zombie have mutated, which the group calls the T-800 (named after the character in Terminator) for its ability to keep on coming at them for their brains despite multiple attempts at killing it.

The best parts of “Zombieland: Double Tap” are the moments that feel new and fresh, such as the additions to the cast. I feel like Zoey Deutch can do no wrong nowadays as she wonderfully manages to be a standout amongst a colorful group of personalities as the blonde, ditzy but altogether lovable Madison. Luke Wilson and Thomas Middleditch are brought in as quasi-doppelgängers for Tallahassee and Columbus and the results are indeed entertaining, especially when you realize just how similar Jesse Eisenberg and Thomas Middleditch’s acting styles are. For Luke Wilson, the joke is less impactful as he more so behaves like Tallahassee instead of looking and speaking like Tallahassee. And Rosario Dawson brings a degree of attitude and sexiness to a role that unfortunately doesn’t add up to much other than being a lazy love interest for Tallahassee.

Everyone looks like they’re having fun though, especially Woody Harrelson who is less intimidating and more of an emotional teddy bear this time around. Where that element was slowly introduced into his character as the first film progressed, here, his inner-man child is there from the very beginning all the way to the very end. Jesse Eisenberg is one of those actors who has not aged in the last 15 years, and as a result, he’s pretty much still perfectly fit to play the sensitive, polite and rules following Columbus. Abigail Breslin, can no longer convincingly play the “baby sister” who needs protection anymore and Emma Stone, has instead of physically, has emotionally outgrown this material despite still giving it her all for what I’m sure will be some GiF worthy reaction shots people will use on social media in the coming years. If you loved these characters the first time around, they and the new members of the cast will hopefully give you the laughs that you so desperately crave.

“Zombieland: Double Tap” has a few bright moments and fun set pieces but unlike some other long-anticipated sequels that took a lot of time between their installments (“Incredibles”), I feel that director Ruben Fleischer’s return to his filmmaking debut will fare more like “The LEGO Movie 2: The Second Part.” Diminishing box office returns. Less critical approval and a feeling of “been there, done that.” From the opening titles sequence which utilizes another popular Metallica song, to the large CGI text displays on the screen showcasing Columbus’s rules, to another surprise cameo, “Zombieland: Double Tap” is nothing more than a collection of recycled ideas, where the filmmakers are hoping that we won’t notice due to the time between installments. There was a moment in our pop culture where zombies were all the rage (there’s even a “Walking Dead” jab in here from Columbus at one point), but that time has now passed. The stakes don’t feel high. The jokes feel worn out. And despite the experience of having a few laughs as buckets of CGI gore are spilled and chunks of vomit are spit out all over the floor, this unnecessary sequel lacks the fresh bite of the first.

Powered by JustWatch
Share
Facebook
Twitter
Copy URL
Previous article
The Next Best Picture Podcast – Interview With “Jojo Rabbit” Editor, Tom Eagles
Next article
“WHAT WE DO IN THE SHADOWS”