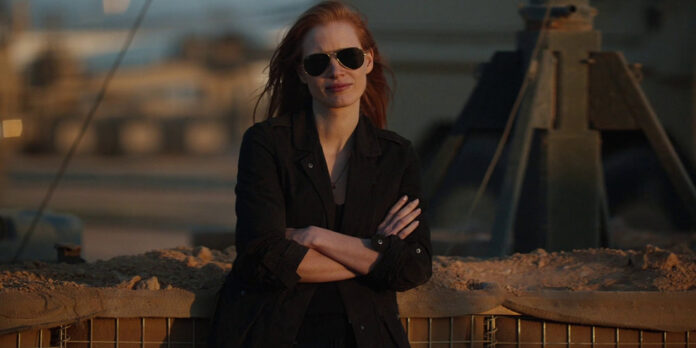 ​THE STORY – Following the terrorist attacks of Sept. 11, 2001, Osama bin Laden becomes one of the most-wanted men on the planet. The worldwide manhunt for the terrorist leader occupies the resources and attention of two U.S. presidential administrations. Ultimately, it is the work of a dedicated female operative (Jessica Chastain) that proves instrumental in finally locating bin Laden. In May 2011, Navy SEALs launch a nighttime strike, killing bin Laden in his compound in Abbottabad, Pakistan.

The United States was a changed country following the terrorist attack on September 11th, 2001. The safety and comfort that we all had taken for granted in our lives up until that point was shattered in a moment, and it was clear that we would never go back to where we were before that unforgettable day. What followed was a decades-long war and occupation and a manhunt for Osama bin Laden, the leader of al-Qaeda. When we look back at the events over the past 20 years, including the death toll of U.S. citizens and overseas civilians and the quick fall of Afghanistan to the Taliban in 2021, we have to wonder: was all of it worth it in the end?

It’s a question that many will walk away with after seeing director Kathryn Bigelow’s 2012 film “Zero Dark Thirty.” In the follow-up to her Academy Award-winning film “The Hurt Locker,” Bigelow tackles the decade-long search for bin Laden that, in this film, was helmed by a fictional CIA intelligence analyst. For nearly two hours, audiences witness the inner workings of the governmental agency as it tries to find one of the most dangerous men on the planet, but it isn’t until the last 35 minutes that the film comes to life. We know how this story ends, but Bigelow takes us on a suspenseful journey to get there.

The film stars Jessica Chastain as Maya, a CIA analyst who has dedicated her entire career to finding bin Laden. So much so that we don’t know anything else about her, like if she has any friends or family. She relies on her intelligence and hunch to track down leads and get information. Many of the men she works with, such as Dan (Jason Clark), resort to torture or “enhanced interrogation techniques” to find what they need (she is also in the room of many of the torture scenes in this film). The film sparked controversy with its depiction of torture, with many claiming it was showing pro-torture propaganda or that it created a false impression that torture was a key method used in finding bin Laden. The film states early on that torture methods were being phased out, and even then-President Barack Obama makes a brief appearance via a “60 Minutes” interview where he criticizes the practice. But by that point, audiences have seen the hard-to-watch practice in action, and it’s difficult to get out of your head.

Throughout the film, Maya is primarily a lone wolf agent who is the only person to believe in her leads. When she thinks that Abu Ahmed al-Kuwaiti, a Pakistani al-Qaeda member and courier for bin Laden, is the man who will lead them to the terrorist leader, others don’t think it’s that easy. And when everyone else is convinced bin Laden is hiding in some cave in Afghanistan, she’s the only one who instead thinks he’s in an ultra-protected compound in Abbottabad, Pakistan. Chastain fills the role very naturally and commands every scene that she’s in. Maya is someone you don’t want to mess with – many of her colleagues learn that firsthand – and Chastain always stands her ground.

The first two hours are filled with various sequences that show the CIA’s different tactics used to find targets, such as tracing phone signals and deploying watchdogs along roadways and tragedies that killed many in the search for bin Laden. Mark Boal’s script sticks to telling events in chronological order and as close to the truth as possible, which isn’t surprising for a former journalist. Even though it’s very procedural for the most part, Boal eventually increases the stakes that, combined with cinematographer Greig Fraser’s camerawork, leads to more suspenseful moments.

It all comes to a head in the final half-hour when Bigelow brings us to the US Navy SEALs’ operation that raided the compound where bin Laden was suspected to be hiding in. The tension and anxiety can be felt as tight framing inside a stealth helicopter that the SEALs are traveling in gives off a claustrophobic feel. The quick camera movements inside the compound are impressive, and the screen’s green night vision color, to signal night vision goggles, puts the viewer in the middle of the action. The SEALs go through the residence, killing men and women inside while sparing children until they reach their final target. The moment itself when bin Laden is spotted and killed is swift, which isn’t as “climactic” as one would expect for a film that’s been building up to this moment but might be close to what really happened. There isn’t a clear image of bin Laden on screen, aside from shots of a long beard – and the U.S. government has never released photos of his corpse – but Maya gives final visual confirmation that they got the man they were after. The look of disbelief and shock on Maya’s face once she sees his body is what we can assume many experienced that day.

The final scene in “Zero Dark Thirty” is a telling moment. Maya, sitting alone in a military aircraft, begins to cry after she’s asked where she wants to go. Now that one of the most dangerous men on the earth has been eliminated, what is she supposed to do now, and where does she go from here? Unbeknownst to us at the time, it would take another ten years of occupation before U.S. troops left Afghanistan, which was ultimately a failed mission. Knowing what we know now, Bigelow’s film lets viewers decide on their own if the pain, suffering, and carnage were justifiable for the chance to say mission accomplished in 2011.