Will “Nightmare Alley” Repeat “The Shape Of Water’s” Oscar Success? 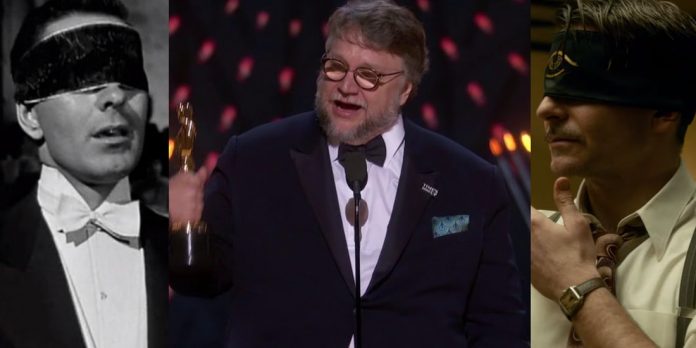 Another contender has entered the Oscar race. On September 16th, the trailer for Guillermo del Toro’s highly anticipated “Nightmare Alley” was released, furthering speculation about this year’s highly competitive award’s season. This being del Toro’s first feature as a director since the Academy Award Best Picture/Best Director winning “The Shape of Water,” the film is an adaptation of the 1946 novel by William Lindsay Gresham, which was previously turned into a film noir directed by Edmund Goulding.

Venturing into the post-war era of film noir leaves behind the troublesome but law-abiding private investigator, in favor of a regular joe, corrupted by his own ruthless ambition and a dangerous woman. “Nightmare Alley” follows Stan Carlisle, an opportunistic carnie who uses deception to become a world-famous spiritualist. Unhappy with what he has and goaded on by a beautiful, seductive psychiatrist, Stan risks it all by flying too close to the sun. Considered “distasteful” by Twentieth Century Fox studio head Darryl F. Zanuck at the time of its release, the film’s subject matter and style are effectively sinister, repelling the audience while making it impossible to look away. An adaptation of the 1946 novel rather than a straight remake, the trailer for del Toro’s film displays clear inspiration from its cinematic predecessor.

The 1947 version stars Hollywood mega-hunk Tyrone Power as Stanton Carlisle, the charming Colleen Gray as his good-hearted girlfriend Molly, Joan Blondell as the washed-out psychic Zeena, and Helen Walker as the sultry Dr. Lilith Ritter. In comparison, the modern casting choices for del Toro’s version has created a notable amount of buzz. Bradley Cooper certainly has the potential to deliver a fine performance as the charismatic Stan, while Cate Blanchett’s casting in the role of Dr. Ritter is near perfect. Helen Walker’s deep voice and confident demeanor can easily remind any contemporary viewer of Blanchett, who will likely dominate every single one of her scenes. The only questionable casting choice is Rooney Mara – known to take on challenging and strong-headed roles – as the somewhat flighty and naive Molly. Given Mara’s versatility and established skill, this role might almost be too easy for an actress of her caliber, but we’ll wait and see.

Del Toro has time and time again demonstrated his affinity for film noir and creature features. Not exactly one for subtly, the film’s trailer uses a monologue from Willem Dafoe as a carnival barker discussing a unique attraction at the carnival – the “Geek,” a performer that rips heads off live chickens and eats them in front of a terrified audience. The question of “Is he man or beast?” permeates through the noir-drenched trailer, indicating del Toro’s signature topic of exploration as the sped-up action creates further curiosity.

Del Toro never sleeps on his film’s visual execution. While commendable, he may be too dedicated in his attempt to recreate the era rather than emulate it, resulting in a story and characters existing as mere shells of what they could be. If the trailer is any indication, we can expect heavy usage of CGI trying its best to replicate the look of the 1940s, appearing as nothing more than a paltry imitation, easily turned off by the flick of a switch by the combined use of practical sets. Hopefully, del Toro will manage to present his audience with his trademark spectacular production design without losing track of the film’s heart and soul.

With an all-star cast and strong visual presence, “Nightmare Alley” will likely be the frontrunner in several Oscar categories, most notably production design, costumes, makeup,  and cinematography. An acting nomination is definitely in the cards among the cast; who it will be is a mystery at this time. At the same time, del Toro himself, a highly respected auteur with a unique style, could potentially snag his second nomination for Best Director and join his two buddies Alfonso Cuarón and Alejandro González Iñárritu with two wins. With his love of the Golden Age Hollywood presented with a monster-filled twist, del Toro always seems to charm his peers and Academy voters effortlessly, but will it be enough for a repeat of his success with “The Shape of Water“? Only a psychic as powerful as The Great Stanton could possibly say.

Do you think Guillermo del Toro will find Oscar success again with “Nightmare Alley?” Do you think it will be a major awards player this season? Let us know in the comments section below or on our Twitter account.