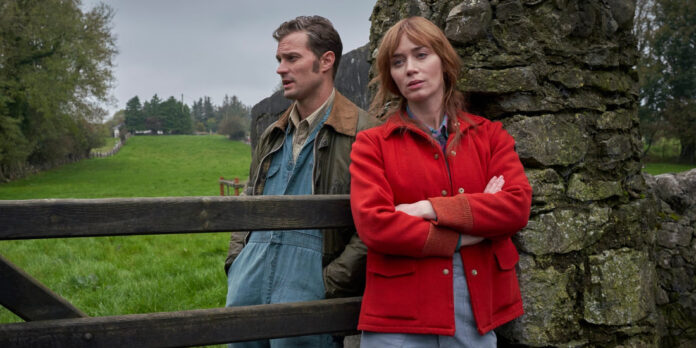 THE STORY – Headstrong farmer Rosemary Muldoon has her heart set on winning her neighbor Anthony Reilly’s love. The problem is, Anthony seems to have inherited a family curse, and remains oblivious to his beautiful admirer. Stung by his father’s plans to sell the family farm to his American nephew, Anthony is jolted into pursuing his dreams.
​
THE CAST – Emily Blunt, Jamie Dornan, Jon Hamm, Dearbhla Molloy & Christopher Walken

​​​​​​John Patrick Shanley may have won an Oscar for his screenplay for “Moonstruck.” He may have also gone on to direct the well regarded “Doubt,” which earned him another Oscar nomination, this time for Best Adapted Screenplay (from his own play nonetheless). The man certainly has some pedigree to his name both on the stage and on the screen. However, his latest effort, “Wild Mountain Thyme,” is not one of his career highlights. In fact, it is a career blunder. Despite being based on yet another play he wrote (and earned a Tony nomination for Best Play in 2014) titled “Outside Mullingar,” John Patrick Shanley has given us something wild, something that takes place on a mountain, and is definitely a rough time for any viewer to sit through.

Rosemary Muldoon (Emily Blunt) is a beautiful and stubborn farmer living in the Irish countryside who is determined to win the affections of her next-door neighbor Anthony (Jaime Dornan). Anthony is aloof and never seems to notice any of her charms, instead choosing to believe he has inherited a family curse. He then learns that his father, Tony Reilly (Christopher Walken), plans to sell the family farm, which Anthony thought would get handed down to him. Tony intends on selling the farm to his brother’s son in the USA (Jon Hamm) unless Anthony marries and gets his life in order. Now seeing that her crush is being pushed into action, Rosemary anxiously awaits to see if Anthony will realize that the life he’s always wanted has been right there in front of him the entire time.

One of the biggest cardinal sins I feel any filmmaker can make is wasting talent. And here, we have a cast which includes Emily Blunt (who once again gets a chance to show off her lovely singing voice), Jamie Dornan, Jon Hamm, Dearbhla Molloy and Christopher Walken. They all do what they can to make this material leap off of the stage and onto the screen with passion, humor and excitement, but it’s clear that what might’ve worked for a theatre audience is no use here. The tone of Shanley’s screenplay is all over the place. It’s not engaging enough to be a drama and it’s never funny enough to be a comedy. It struggles to find its footing from the very opening as we get a beautiful look at the Irish countryside with a sweeping score by Amelia Warner, which is suddenly ruined by Christopher Walken’s horrendous attempt at an Irish accent welcoming us to Ireland via. voiceover.

And it all starts to go downhill from there as we’re introduced to the various characters, who lack clear character motivations and are not that interesting to follow. Anthony never notices anything and is famous for what passes by him. Rosemary wants…a man to love her? Such uninspiring character traits should lead to some slapstick comedy, but instead, Blunt and Dornan never gel together and are saddled with a complete lack of chemistry in all of their scenes together. When we finally understand why Anthony is the way he is, in a confrontation scene with Rosemary that is equipped with over the top uses of thunder and lightning, the result is one of the most bewildering plot twists I’ve ever seen or heard on stage or on screen. As I mentioned before, maybe such a drastic storytelling choice might’ve worked better on stage, but here, it reads as laughable and embarrassing for everyone involved. Jon Hamm’s mere presence adds some levity and radiance to a film that wants you to get swept up in its folksy romance, but that’s not a huge ask when your material is this poorly transferred to the screen.

When Tony tells Rosemary as a little girl that she is a white swan, no one can stop her and she can do anything; the movie uses this as permission to say to us that it too can do anything and there’s nothing anyone can do to stop it. And what “Wild Mountain Thyme” does is it wastes our time with a plot we care very little about, with characters who are lacking in depth and any semblance of a spark on screen. I wish I could sing the praises of Emily Blunt and Jamie Dornan and tell you how much I enjoyed this delightfully weird romantic-comedy from a clearly very talented writer…But this is not one of those “thymes.”