Season five of “Better Call Saul” ended a few weeks back with a rather excellent finale. Slowly, but surely, we’re watching Jimmy McGill (Bob Odenkirk) fully transform into the scumbag persona of Saul Goodman we know so well from “Breaking Bad”. Something that “Better Call Saul” benefits from is the fact that there’s a predetermined ending. Maybe not for the show, but for specific characters. We know Jimmy becomes Saul, we just don’t know what causes him to achieve his full transformation. Then, aside from a few characters, most of the main roster on “Better Call Saul” doesn’t appear in “Breaking Bad,” which could mean that some of these characters could become collateral damage when it comes to Jimmy’s transformation.

One of the characters in the show that’s both a fan favorite and critical darling is Kim Wexler, played by Rhea Seehorn. She has practically become a co-lead to Odenkirk and has been fantastic throughout the entirety of the show. Despite being involved from the very beginning, Seehorn has yet to be nominated for an Emmy for her work on “Better Call Saul.” It’s a crime all on its own, but it sort of falls in line with another actress in the “Breaking Bad” world.

Anna Gunn, who played Skyler White in “Breaking Bad,” didn’t receive a nomination until season four of the series. Even though Gunn serves as a co-lead to Bryan Cranston throughout the series, and was spectacular from start to finish, her nomination still didn’t arrive until near the end of “Breaking Bad’s” legendary run. Despite giving a consistently excellent performance, it seems that the Emmy nomination didn’t come for Gunn until her character arc was reaching its peak. At first, when Skyler learns that her husband is making meth, she wants no part of it. But as the series progresses, she starts to become more heavily involved, much to the delight of a fan-base who disliked the character in the early seasons for taking an opposite approach. She would go on to win two back to back Emmys for her performance in the show’s final two seasons.

This seems to be a similar course of action for Kim Wexler (and by extension, Rhea Seehorn). She’s reaching the peak of her character arc, and while just one season ago we saw her want no part of Jimmy’s transformation into Saul, in the final few episodes of this season we see Kim go through a transformation of her own. Seehorn’s performance this season has been particularly jaw-dropping with numerous stand-out moments, especially in the last few episodes, making this her best season yet both for her character and for her as an actress.

From the beginning of the show, Kim has been making decisions that she wants to make. She’s rarely made decisions for the sake of other characters’ emotions or motives. She didn’t quit Hamlin, Hamlin & McGill to go solo with Jimmy because Jimmy wanted her to. She quit working with Jimmy to join Schweikart & Cokely because it was what she wanted to do. And, ultimately, in the season finale, she quit that prestigious law firm in order to go back to her pro bono work because that’s what she wants to do. Kim has always had this incredible power dynamic on the show where she’s in complete control. Even when she gets thrown in doc review because of Jimmy, she uses her talent and sheer will to work her way back up the ladder. This aspect of her character shines true in one of, if not the biggest moment of Season 5’s finale.

In the finale of season four, when Jimmy was reinstated to practice law again, and it was revealed he was faking the emotion he showed during the speech about his brother, we saw a real glimpse of the Saul Goodman we know. He gave Kim some finger guns and simply said: “It’s all good, man.” We saw Kim realize what had happened and she seemed a bit uneasy. She wasn’t sure about the transformation she was witnessing, after all, she doesn’t know the side of Jimmy that we the audience know from his appearance in “Breaking Bad.”

In one of the final scenes of this finale, we see Kim and Jimmy talk about different ways to screw over Howard Hamlin. At first, it just seems like some fun banter, but as the scene reaches its end, it becomes a little more clear that Kim isn’t joking. She wants to screw over Howard, she wants to hurt him and break him down. Then at the climax, when Jimmy simply asks if she’s serious, all she does is give him the same finger guns he shot her in the finale of season four, leaving Jimmy and the audience as stunned as we were at the end of last season. 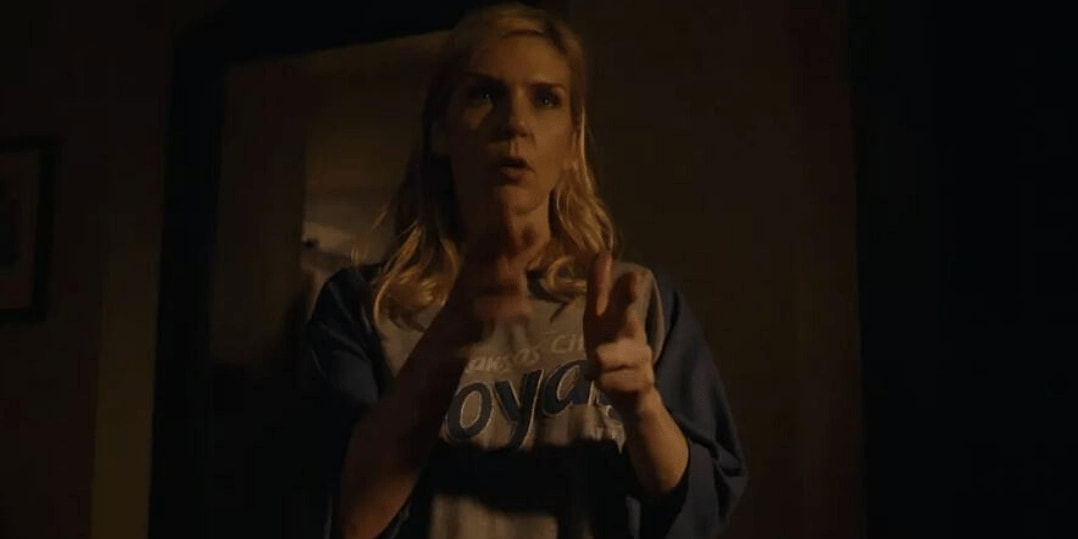 It’s clear that Kim likes being in control. We know that much. But when we saw her reaction to Jimmy acting a bit sly, it seemed like she didn’t want to be any part of whatever he was trying to do. But now, it seems like she may be headed down a path of transformation herself, a “bad choice road” if you will. It’s a road that maybe doesn’t reach Saul Goodman level, but it’s certainly something that will be unusual for her, at least from what we’ve seen so far.

Earlier, I mentioned that some of the characters in the show could act as collateral damage in the wake of Jimmy fully embracing Saul. I think Kim will without a doubt be one of those characters. Our love and care for her throughout the show could come to a screeching halt if this does happen. So why exactly does Seehorn deserve to not only receive her first nomination but her first win at the same time? Well, for one, this is her best season, performance-wise, by far. She gives a stellar monologue in the second to last episode that knocked a ton of viewers’ socks off to the dangerous Lalo Salamanca. But I think the way Seehorn is reaching the climax of her character arc is just as impressive, if not more, as to how Jimmy is reaching his. We know the outcome of Jimmy McGill, we don’t know the outcome of Kim Wexler. That makes it all the more exciting I think and Seehorn is there to guide us the whole way through.

On top of that, her performance just screams awards. Not only does she weave through her dialogue with intensity and power, but she completely embodies her character. She has a swagger, a feeling about her character that just feels right. Her body language, her ability to switch inflictions on a dime, Seehorn gives a pulse-pounding performance throughout the series and she’s at her absolute best in this latest season.

Rhea Seehorn does face quite a bit of competition this year, however, so her first Emmy nomination and hopeful win may not be as easy as one would think. She faces a lot of big names that also gave excellent performances in their respected shows: Helena Bonham Carter for “The Crown,” Meryl Streep for “Big Little Lies,” Julia Garner for “Ozark,” Fiona Shaw for “Killing Eve,” Thandie Newton for “Westworld”…The category of Supporting Actress in a Drama Series is without a doubt stacked. While I believe Seehorn can win because of her incredible track record during the entire series, and her standout performance in this particular season, it won’t be easy.

“Better Call Saul” would be significantly less impressive and entertaining without the character of Kim Wexler; more specifically, without the performance from Rhea Seehorn. If that isn’t something that screams award-worthy, I’m not sure what could. She steals every single scene that she’s in and adds a whole new emotional layer to the show dude to her relationship with Jimmy McGill-Saul Goodman that’s missing from not only other dramas but even “Breaking Bad.” It’s an absolute crime that Seehorn hasn’t been nominated yet, so it would be perfect if the first time she’s nominated, she also goes home a winner.

Do you watch “Better CalL Saul?” If so, do you think this will be the year Rhea Seehorn receives her first Emmy nomination? Let us know in the comments section below or on our Twitter account.