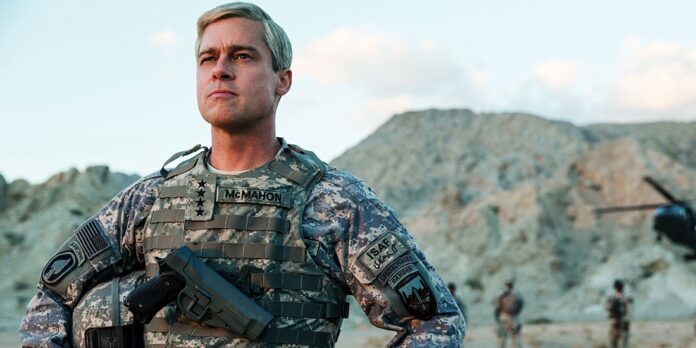 THE STORY – A successful, charismatic four-star general, Glenn McMahon, leaps in like a rock star to command NATO forces in Afghanistan, only to be taken down by a journalist’s no-holds-barred exposé.

​“War Machine” is an intriguing yet difficult viewing experience. Difficult in the sense that the film never really seems to discover itself. It constantly bounces back and forth between a war movie, a satire, and a drama film. Since the latest Netflix original has such a hard time finding its footing it is difficult to connect to this film on any sort of emotional level. All of the characters offer some sort of substance to the plot but not to the viewer. “War Machine” is an interesting war, drama, satirical comedy while simultaneously being none of these things. With only a few decent scenes and the best Brad Pitt performance in recent memory, “War Machine” is a lacking Netflix original.

Based on journalist Michael Hastings’ book “The Operators: The Wild & Terrifying Story Of America’s War In Afghanistan”, the film tells a story about soldiers in Afghanistan shortly after Obama was elected president. “War Machine’s” story remains rather just sort of telling the stories of General Glen McMahon (Brad Pitt) and all of the soldiers that he oversees. The characters in the film always seem somewhat confused at the situation that is handed to them but the characters are easily the highlight of the film.

The character interaction works incredibly well, not only in the setting of the film but just in general. All the characters have great dialogue moments with one another that holds some substance, again to the overall plot but not necessarily to the viewer. The interactions are funny and sometimes even dramatic but there is no connection to the audience. Most of the characters seem to just kind of come and go in each of the scenes that it’s difficult to find any real emotional connection to them. The familiar faces and light-hearted interactions are not enough to save the emotion but Pitt’s performance almost is.

Pitt’s performance in this film is kind of comforting in a way. With a film that takes on a sort of unfamiliar ground and unsettling topic, Pitt is our guide through this world. The world is dark and horrifying but we never see this necessarily because it’s common knowledge at this point. We understood what was happening in Afghanistan so when you begin watching this film you prepare for the worst. However, since “War Machine” isn’t your typical war film, you as an audience member are already offset. Not only have your expectations been subverted but now the film cannot decide what it wants to be? Through all the constant mind changing decisions the movie has, Brad Pitt is always there to keep us rooted.

Brad Pitt is the heart and soul of the plot and the film so we immediately have a bit of emotional connection with him. Pitt is discomforted at his scenario and is constantly trying to find any piece of mind or solace throughout the course of the film. Since this never really relishes into his character we do feel kind of bad for him. Not as much as we should because his character isn’t built up as the protagonist but just another character in the film. However, as humans, we empathize. Brad Pitt is distraught and unsettled and we do not want this happening to any character in a movie unless of course, they deserve it. So the film clings onto a small piece of emotion through Pitt’s best performance in recent memory but not enough to save the overall film.

“War Machine” is an interesting, slow moving war film that cannot decide what it wants to be. Jumping through hoops of comedy and drama, the film is constantly juggling all of the different things it is trying to achieve and ultimately comes up short. Despite Brad Pitt’s passion-filled performance there still is not enough substance within the film for it be flat out enjoyable. “War Machine” is a fun attempt at the “war-satirical comedy film” but serves better as more of a history lesson.