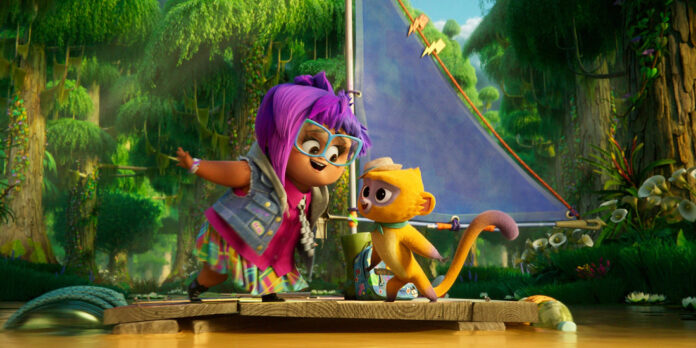 THE STORY – Vivo is a musically gifted kinkajou (aka a rainforest “honey bear”) who embarks on the adventure of a lifetime to deliver a song to his cherished owner’s long-lost love, with the help of Gabi – an energetic tween who bounces to the beat of her own offbeat drum.
​
THE CAST – Lin-Manuel Miranda, Ynairaly Simo, Zoe Saldana, Juan de Marcos González, Gloria Estefan, Brian Tyree Henry & Michael Rooker

Lin-Manuel Miranda has been one of the most prolific entertainers of the past several years. The multi-faceted artist has dabbled in everything from movie soundtracks, and Broadway shows to documentaries and Disney blockbusters. He’s slated to contribute to five releases in 2021 alone, the latest of which is the animated musical “Vivo.” Miranda voices the titular character and composes the film’s music, bringing his singular brand of showmanship back to the animated realm after scoring 2016’s “Moana.” The results are colorful and exhilarating, though not without their share of narrative shortcomings.

The film centers around Vivo (Miranda), a kinkajou who spends his days playing music with his elderly owner Andrés (Juan de Marcos González). The duo happily resides in Havana, Cuba, but a letter from the famous singer Marta Sandoval (Gloria Estefan) prompts Andrés to make the long trek to Miami to perform with her. When tragedy strikes, Vivo is forced to decide between the comfort of his home and fulfilling his owner’s dreams, leading to a series of life-changing experiences.

Thematically, “Vivo” feels like a companion piece to Miranda’s “In the Heights.” While that film deals with an American protagonist who pines for the wonders of Central America, while “Vivo” reverses the conflict, dragging its protagonist away from home and thrusting him into the hustle and bustle of the United States. The culture clash makes for insightful comedy moments, especially when Andrés’s grandniece Gabi (Ynairaly Simo) enters the fold. Her inability to speak Spanish and general lack of knowledge regarding Cuban music sheds light on the divide between cultural and ethnic heritage. It’s touching to watch Gabi learn about her family while at the same time maintaining the characteristics that make her uniquely American. It’s here the film taps into specificity and nuance that’s rarely depicted in mainstream animated films.

The musical talent involved with the film warrants similar praise. Juan de Marcos González and Gloria Estefan are pillars of the music community in Cuba – the former as a member of the Buena Vista Social Club and the latter as a crossover pop star. They bring unrivaled authenticity to the film’s musical stylings, whether it be Son Cubano or guajiro, and it’s a credit to Miranda that such care is taken in giving audiences the real deal.

Unfortunately, it’s while on the subject of the musical score that the film’s issues begin to manifest. Miranda is a skilled composer and emcee, as millions of “Hamilton” fans can attest. Still, his implementation of pop and hip-hop feel wholly at odds with the traditional Cuban music that drives the plot. The percussive instrumentation that kicks off the film is immediately sidelined by Vivo’s rapping, which not only undercuts the tune but reeks of an eagerness to appeal to the broadest possible audience. The same can be said for the songs involving Gabi, which repeatedly devolve into toothless, Auto-Tuned filler.

For a film that so proudly wears its Cuban influence on its sleeve, it too often feels as though Miranda relies on generic pop to fill up the runtime. In comparison to a film like “Coco,” which had a unified (and geographically appropriate) musical palette, “Vivo” comes off inconsistent, both in terms of sound and intent. I wish Miranda had taken a more narratively motivated approach or at least focused on pop tunes that had a little more punch. The closer one looks at the lush Cuban sounds he could have pulled from, the more this registers as a missed opportunity.

The screenplay by Quiara Alegría Hudes and (director) Kirk DeMicco is built around a strong premise and a well-executed payoff. It doesn’t try to reinvent the wheel, and its willingness to roll with the pre-existing model makes for some memorable scenes. The flashbacks involving Marta and Andrés are perfectly executed, hitting just the right notes to capture their classically doomed romance. Where the script ultimately falters is in the humor department. Most of the jokes fail to land, whether it be through rushed delivery or awkward wording. Characters like Dancarino (Brian Tyree Henry) and Lutador (Michael Rooker) are saddled with punchlines that fall way beneath the caliber of their charismatic voices. Vivo is perhaps the most prominent victim here, rattling off so many clunky barbs that the decent ones get lost in the shuffle. You won’t be able to recall a single joke once the credits roll, and for a movie billed as a musical-comedy, that’s a prominent impairment.

The vital aspects of “Vivo” are undeniable, particularly the film’s handling of cultural identity and heritage. As someone who was born in the United States and has family in Central America, it was nice to see a film tap into that singular dynamic. Sadly, the film’s decision to downplay Cuban music in favor of American pop is stifling, and the repeated attempts at humor only serve to exacerbate its predictable structure. “Vivo” is a decent viewing experience, but given the potential it had, it winds up a minor disappointment.