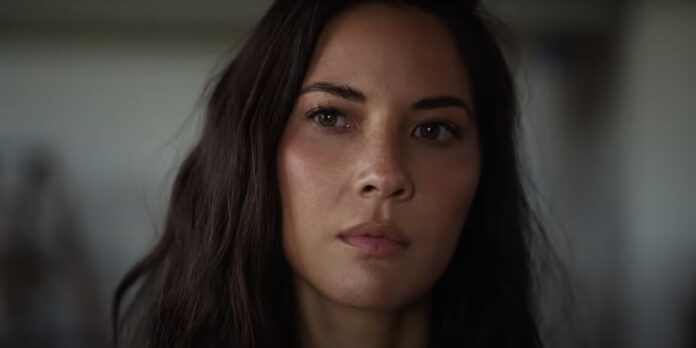 THE STORY – A film executive realizes that the guiding voice inside her head has been lying to her about everything, but the tables turn when she learns to trust her heart and discovers the love of her life is closer than she thinks.

​​​We’re all familiar with the voice inside our heads. Sometimes it encourages and uplifts us, but a lot of times, unfortunately, it’s the one that tells us we’re not good enough or will fail. Imagine now that voice is an angry, intense, and deafening Justin Theroux who, even if you feel confident or optimistic about something, is ready to take you down before you take that first step. It’s the plight that Olivia Munn finds herself in Justine Bateman’s feature directorial debut “Violet,” which tackles those demons inside in an experimental and colorful way.

Violet (Munn) seems to have it all on the outside: A Hollywood job, knows big names in the industry, gets invited to parties, and is, of course, stunningly beautiful. What could be wrong with her life? Well, that toxic voice inside (voiced by Theroux) keeps her from truly being the person she wants to be and doing the things she wants to do.

At times when Violet is alone with her thoughts, we see them appear on the screen: “What’s wrong with me?”; “I thought I was better”; “I feel like I don’t know who I am anymore.” She thinks but rarely says these things, mainly because she feels they’re not “right” or that it’s better to keep it all inside. When things get really overwhelming, we hear loud, screeching music, see images of decaying animals, and the screen slowly fades to red, all meant to convey the chaos that his woman is going through that no one understands. Not to mention the insults that keep coming from the voice inside, which Violet calls “the committee.” Everything from “You’re fat” and “What are you wearing?” to “People will think you’re a loser” and “How do you expect people to take you seriously?”

In this world, Violet feels alone. Her Hollywood job includes being surrounded by disrespectful and lazy coworkers and a boss who thinks he can walk all over her. Her family also doesn’t provide comfort, as Violet reflects on how cruel her mother was to her as a child and how other members have continued this tradition even into her adulthood. She does have Red (Luke Bracey) in her life, a screenwriter who she has known since childhood. There’s definite chemistry between the two, but that voice inside, once again, tells her that dating a screenwriter and not a Hollywood executive would mean the end of her career. “That doesn’t even make any fucking sense,” Violet says to herself at one point, and if we all took a step back and looked at some of the decisions we’ve made based on the voice inside our heads, we’d likely admit the same thing.

Violet is resilient and finds ways to take charge of her life despite all the insecurities, whether they’re justified or not. And rather than feeling crappy about it or worrying herself to death about what others will think or say, she begins to find peace and realizes that nothing should stop her from happiness. Well, until that voice chimes in again.

“Violet” is a film that many will relate to because who doesn’t worry about what might happen if you stray from what you think you should do? Even though we may not have the same job or lifestyle as Violet, at the core are the same dilemmas of feeling small, not deserving the good things in life, or worrying about how others will perceive us if we decide to do something different. Bateman wholly captures that doubt in her script and finds a way to resonate with viewers. Though the film overall leads to quite an anticlimactic conclusion and somehow never mentions seeking mental health resources as an option, it’s still enjoyable. But at the helm of its success is Munn in a career-best performance. She’s able to go from keeping her cool one moment to breaking down the next without issue. And she doesn’t even have to have lines to portray how she’s really feeling — her facial expressions say it all. When she finds that courage — or maybe more of a “whatever” attitude — to let go of everything else and just focus on herself, we see an even better version of her on-screen.

The film also gives us unique moments with editing choices. The deafening music and disturbing images that show on screen, though a bit repetitive, do a great job of portraying the struggles that Violet feels inside. And having her true thoughts, written in cursive, appear quietly on-screen contrast nicely with the loud, angry, fussy, and outright mean committee. Theroux must also be commended for providing such a dominating and ominous voiceover performance.

“Violet” gives us a story that is so relatable; it might cause a bit of anxiety in us too. With its creative editing choices and brilliant performances from Munn and voiceover work from Theroux, it’s a film that manages to express what many of us struggle with on a daily basis. Though its ending is a bit lackluster, “Violet” is nonetheless an enjoyable feature directorial debut from Bateman that will hopefully be followed up with even more successful projects.