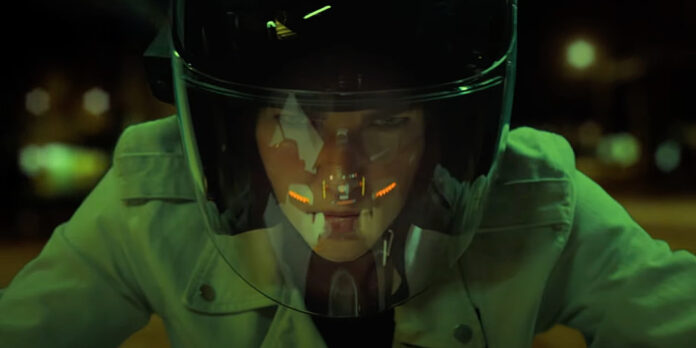 THE STORY – A retired cop forces a former drug courier to do his bidding by holding her daughter hostage. Armed with guns, guts and a motorcycle, she must now take out a series of violent gangsters — or never see her child again.

“Vanquish” begins with a long and dramatic black and white opening sequence. It’s a slow start for a film, and it never improves from there. Formerly titled “The Longest Night,” this action crime thriller directed by George Gallo never gives its audience a reason to care about its characters and has a sometimes confusing plot. Ruby Rose and Morgan Freeman give decent performances, but there’s little to redeem this film beyond a handful of good action sequences.

Written by Gallo and Sam Bartlett, the story is centered around Victoria (Rose), who has worked to put her criminal past behind her for her daughter’s sake. She works as a caregiver to Damon (Freeman), a retired cop who has a dark past of his own. The film begins as Damon holds Victoria’s daughter Lily hostage to get her to agree to help him with some shady tasks. He needs her to make five stops, picking up money at each one.

Enter the motorcycle, high-tech helmet, and guns. With Damon watching via video from his home and giving her instructions through an earpiece, Victoria begins her mission. Her night gets complicated from the first task as someone recognizes her from her old exploits with her brother. Soon, Victoria is racing against time to make it to all five stops before a gang of men catch up with her.

The movie is much more dedicated to its action sequences than it is to its characters or plot. Even by the end, it’s unclear how the audience is meant to feel about Victoria or Damon. There are lots of different side characters, none of which are well developed, and it can be difficult to keep track of who they all are. One of the characters that Victoria goes to collect money from is particularly troubling. With a (bad) Southern accent and three men in his house that he makes suggestive comments about, he seems to be some uncomfortable predatory gay male stereotype, especially once he drugs Victoria.

The opening is confusing, as is the murky backstory between Victoria and Damon. The audience spends much of the film trying to piece together what happened to Victoria in the past, but it’s never presented with much clarity.

There are lots of creative shots and shaky handheld camerawork, but it mostly feels over-stylized. With montage after montage, including flashbacks to things that have just happened in the film, and an overuse of fades, the film makes some questionable editing choices as well. The mood lighting (and especially green lighting) and repeated dramatic shots of clouds moving over the moon are overdone. The score, by Aldo Shllaku, works overtime to try to build tension.

The movie is at its most interesting in its final third, as some of the plots come together enough for the audience to know what’s going on fully. However, the stakes never really feel high enough for it to be engaging. The performances are fine, and the run-time is thankfully only a little over ninety minutes. If all you’re looking for are some action sequences, then this film has some to offer. But if you want an engaging plot and characters, “Vanquish” isn’t the film for you.