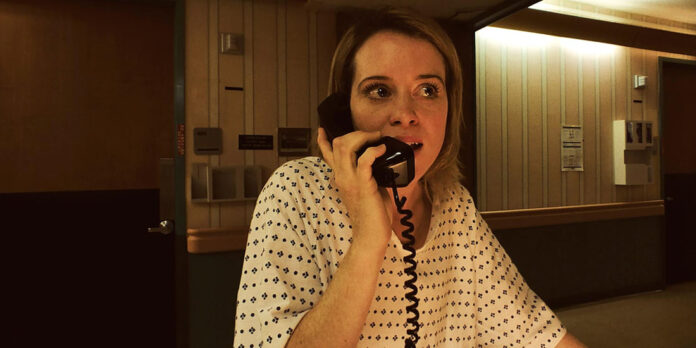 THE STORY – Sawyer Valentini relocates from Boston to Pennsylvania to escape from the man who’s been stalking her for the last two years. While consulting with a therapist, Valentini unwittingly signs in for a voluntary 24-hour commitment to the Highland Creek Behavioral Center. Her stay at the facility soon gets extended when doctors and nurses begin to question her sanity. Sawyer now believes that one of the staffers is her stalker — and she’ll do whatever it takes to stay alive and fight her way out.
​
THE CAST – Claire Foy, Joshua Leonard, Jay Pharoah, Juno Temple, Aimee Mullins & Amy Irving

​​​When feelings of repressed trauma are at the center of a film, it can either be tauntingly distasteful, or effectively engrossing. In the psychological thriller, “Unsane,” it is apparent that Steven Soderbergh is reinvigorating his filmmaking tools and stretching out methods that are both aesthetically unbalanced and scathingly alternative. It forms into a semi-coherent watch with a lot to say about the state of the mind and the dangers of ignoring cries for help. Soderbergh’s characters in the past are known to be enterprising, clever, and vengeful. In Sawyer Valentini, we are introduced to a woman who takes no second guesses to justify what she perceives to be urgent. You could say the film is as technically challenged as much as it is anxiety-inducing. Nonetheless, it stands as a testament to how society can cripple one’s psyche, strip women of their voice, and throw out the keys to comfortable stability.

Claire Foy is Sawyer, an ambitious bank analyst who relocates to Boston from Pennsylvania in order to rehabilitate her life on fresh grounds after being a victim of stalking. She is exceptional at her job, she keeps her mother’s picture on her desk, and she opens herself up to dating. It’s when Sawyer begins to see flashes of her stalker, David (Joshua Leonard), that she decides to assess her anxieties and seek professional help. While visiting the Highland Creek Behavioral Center on an appointment, she unknowingly signs off on what could be the security of her sanity. From then on, it’s a severely manic journey as she is admitted to the psychiatric hospital on the account of her occasional suicidal thoughts; repercussions brought on by her stalker. She soon begins to see him disguised as a hospital worker. It’s at that moment where we lose it ourselves. “Unsane” digs deep into psychotic themes and the ethical layers of our health care, putting the plight of such ideas upfront.

Perhaps a neat thing, the film is shot entirely on the iPhone 7 Plus, lunging it alongside the effort in Sean Baker’s “Tangerine,” which was shot on the iPhone 5. Soderbergh implements different lenses, including the fisheye, to close the viewer into Sawyer’s unnerving time in the hospital. The loose grain against the tonality of the set plays up to Sawyer’s shaky reality. Soderbergh is keen to never abandon his intrusive angle shots behind the arm and over the shoulder. He plays up to this niche most effectively in “Unsane,” where he isn’t afraid to shoot close on the face. The technicality and usage of the iPhone boast a terribly enthralling claustrophobia that springboards into invasive emotion. In many ways similar to his 2013 thriller drama, “Side Effects,” here Soderbergh explores psychiatric themes in a much more dire way. We see Sawyer in her most vulnerable state, latching onto herself and closing off all ill-intentioned hysteria. We want to know what’s going on and it almost feels like these close shots are interrogating her themselves.

Soderbergh’s film inhabits a color gradient very similar to his work in “Traffic,” a film that navigated its narratives through monochrome blue, warm overexposure, and resin filtered sharpness. “Unsane” has an immense amount of blue and yellow shifts. This ultimately feels like an ongoing imbalance between insanity and mental clarity. These hues develop into a psychosis of Sawyer’s existence, jumping from one frame of grainy shot to the next. “Unsane” doesn’t look to please you aesthetically, but shake you to the core.

In a state of nauseous bewilderment, it’s Claire Foy that delivers a nuanced performance as Sawyer’s stay at the behavioral center elongates. She is complex and void of any restraints (Besides maybe bed restraints). There is nothing graceful about this performance and that’s precisely why it works. Rigid, vulnerable, and paranoid, Sawyer is clawing at her own sanity just to get through and be heard. Foy elevates Sawyer from whatever writers Jonathan Bernstein and James Greer made her look on paper, and then multiplies that. Foy is enthralling, even at times when we question some of the things she’s proclaiming. She carries the film with her constant battle to be heard and the enraging things that tear her apart. A battle cry in what could be linked to this society’s constant oppression of a woman’s voice, Sawyer is as ambitious and resilient as they come.

“Unsane” reevaluates the state of mental health care in a very sinister light. Why do we constantly overlook things to surface level importance? Why don’t we sometimes get to assess our own independence and treatment? It offers up some perspective as to why abuse in these forms still occurs. No longer in control of her own care, Sawyer is met with endless mistreatment in the form of ignorance. The nightmares don’t entirely lend themselves to the hospital, but to emasculated authority as a whole. In what is possibly a hard look at our own attention to detail and privacy, it takes on a form of its own to rattle our minds as much as it does Sawyer’s.