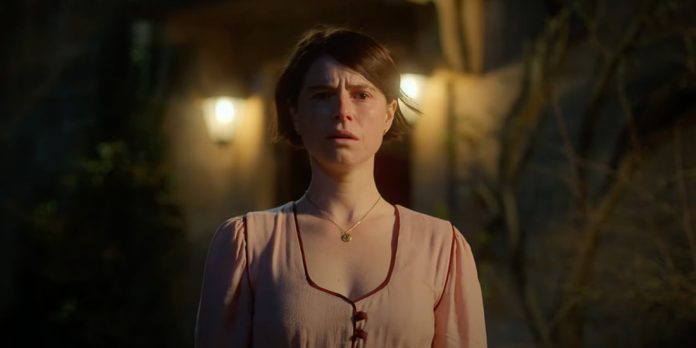 By Matt Neglia
​
A24 has released the trailer for Alex Garland’s latest film, “Men,“ starring Academy Award-nominee Jessie Buckley, Rory Kinnear & Paapa Essiedu. The film is set to open in theaters on May 20th, 2022.
​
​Click below to see the trailer.

​Plot Synopsis: In the aftermath of a personal tragedy, Harper (Jessie Buckley) retreats alone to the beautiful English countryside, hoping to have found a place to heal. But someone or something from the surrounding woods appears to be stalking her. What begins as simmering dread becomes a fully-formed nightmare, inhabited by her darkest memories and fears in visionary filmmaker Alex Garland’s (Ex Machina, Annihilation) feverish, shape-shifting new horror film.

What do you all think of the trailer? I am a massive fan of Alex Garland’s previous two films, “Ex Machina” and “Annihilation,” so I’m already in the camp for whatever he wants to deliver next. The teaser is presented like almost every other A24 trailer, but if you’re already a fan of how they market their films, then this will be right up your alley. It looks creepy, dark, gorgeously shot, and stars Jessie Buckley, who is one of the most exciting actresses working today. I have no reason to doubt the storytelling abilities of Garland, despite not knowing much about the plot for this movie. However, its atmospheric tone and vague setup are filled with enough intrigue to get me excited. What do you all think, though? Let us know your thoughts in the comments section below or on our Twitter account.