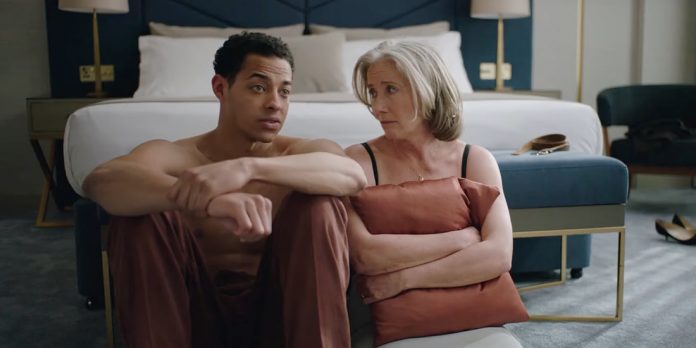 By Matt Neglia
​
Searchlight Pictures has released the teaser trailer for “Good Luck To You, Leo Grande” starring Emma Thompson & Daryl McCormack. The film had its world premiere at this year’s Sundance Film Festival and will be released on Hulu on June 17th, 2022.
​
​Click below to see the trailer.

​Plot Synopsis: Nancy Stokes is a retired widow, seeking romance and excitement after a boring marriage. She hires a good-looking young sex worker called Leo Grande, in the hope of enjoying a night of pleasure and self-discovery.

What do you all think of the trailer? I was fortunate to see this at Sundance earlier this year, and it was one of the better films from the festival, in my opinion, mostly due to the phenomenal performances and chemistry from Emma Thompson and Daryl McCormack. Sharply written, funny and insightful into human sexuality, intimacy, and learning to accept who we are, the trailer perfectly captures a portion of the film’s tone while withholding the more dramatic moments, which should be experienced while watching as that’s where the film’s true power comes from. And yes, it does primarily take place in a single room (for the most part), making it feel almost like a play at times with Thompson and McCormack as the stars. What do you think? Let us know your thoughts in the comments section below or on our Twitter account.