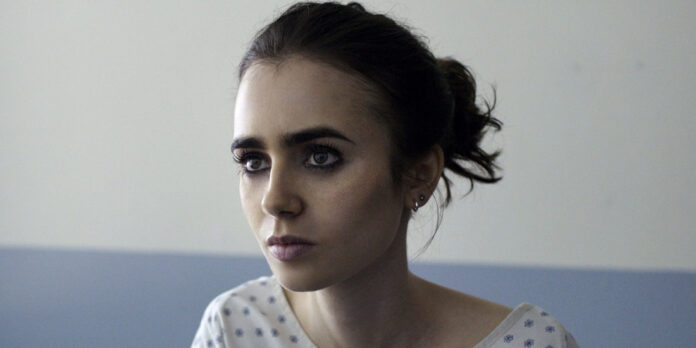 THE STORY – Ellen is an unruly 20-year-old anorexic girl who spent the better part of her teenage years being shepherded through various recovery programs, only to find herself several pounds lighter every time. Determined to find a solution, her dysfunctional family agrees to send her to a group home for youths, which is led by a non-traditional doctor. Surprised by the unusual rules, Ellen must discover for herself how to confront her addiction and attempt self-acceptance.

Netflix has been on quite the roll recently with the films that they are both making and distributing. They have had some good hits and some bad ones but all in all, Netflix is a big player in the film world whether we like it or not. However, their most recent attempt at a socially relevant film, “To The Bone,” is a film that will only be remembered for how exceptionally terrible it is. The film falls flat on almost every level and only has a few redeeming qualities, but none strong enough to redeem itself.

“To the Bone” revolves around Ellen (Lily Collins), an artist who is also a college dropout. Ellen is a young woman who is battling her struggle with anorexia. In the films first act, we begin to learn how Ellen is completely self-aware of her illness and refuses to get better. In a final attempt to help her come to terms with her illness and ultimately an attempt to get her better, Ellen’s stepmother takes her to see Dr. William Beckham (Keanu Reeves). Dr. Beckham is an eating disorder specialist who has an unconventional way of helping his patients. So in order to assist Ellen, Dr. Beckham admits her to a six-week program where she will live in a house with six other people who have similar illnesses.

To start off with a positive, Collins gives quite an admirable performance. Some of the lines she is given are completely ludicrous but she still manages to shine on screen. She has a certain energy about her that the other characters in the film do not have.  Most of the co-stars act as if they are reading the lines memorized in their heads versus giving a performance. Each character lacks a certain depth to them and it’s depressing.

This film and its setting were a perfect opportunity to show off some character arcs and development but instead, it is quite the opposite. None of the characters necessarily evolve and each one of them ends up just where they began. Now, none of the characters have any particular flaws with them. They are all just one note characters. By this I mean each character either reassembles one emotion or none at all. Besides Ellen, none of the other characters truly represent anything. Keanu Reeves is meant to be a voice of hope or reason for Ellen but his words carry no weight. Reeves just speaks in metaphors and odd tones to give off the feeling of hope and understanding but as the film progresses, he just becomes another voice in Ellen’s head. Ellen is constantly reassuring herself that she cannot get better because she simply can’t. She cannot quit the behaviors that she has been enacting over the past several years. Reeves doesn’t give Ellen any solid answers to fix herself or help herself, he believes she has the answers inside of herself.

Every moment feels fabricated and is emotional just for the sake of being emotional. There is no true connection with any of the characters because they all act in such condescending ways. One of the characters in the house is a happy go lucky, high confidence kid but he is also sensitive and falls desperately in love with Ellen, which is odd considering he has only physically known her for about three weeks. He had followed Ellen’s art online so he claims to have known her for quite some time. But he acts all tough and masculine around Ellen attempting to give an imposing and confident feel to himself. But the second Ellen begins to attempt to leave and make her own decision he breaks down and claims that he needs her. So is he masculine and the “tough guy” or is he a sensitive, hopeless romantic? The characters and the film cannot make up its mind about what it wants to be and it’s upsetting.

The screenplay is incredibly rocky in several places too. The interactions between characters feel as fabricated as the emotional moments. Nobody interacts naturally or in a realistic setting. All of the interactions feel like the characters are just reading to one another. Michael Cain described acting as listening and then reacting, not waiting for your turn to speak. He says the problem with some actors is that they just wait for their turn to speak versus listening and genuinely reacting. But of course, these actors cannot flex these muscles that Cain talks about when the screenplay is so flat. Each moment is supposed to carry the weight of the world but it all feels so fake that it just gets annoying after the first hour of the film.

“To the Bone” is a film that tries way too hard to be emotional but instead just becomes an annoyance. It has all the aspects it needs to be a successful character drama about the effects of eating disorders but it just falls completely flat. The screenplay is absolutely atrocious and the character interactions are just frail and fragile. Even though Lily Collins gives a career best performance, her energy is not enough to carry the weight of the film. “To the Bone” is a complete misfire for Netflix and you will not be missing anything if you decide to skip it.

Powered by JustWatch
Share
Facebook
Twitter
Copy URL
Previous article
The Next Best Picture Podcast – “War For The Planet Of The Apes”
Next article
Can “The Big Sick” Maintain Momentum To A best picture Nomination?