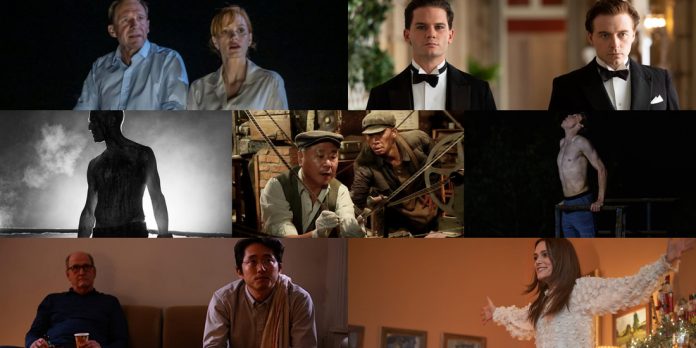 By Dan Bayer
​​
With fewer big premieres than in the past and most “big” titles unavailable for press and industry to view digitally, the 2021 Toronto International Film Festival feels like the black sheep of the fall festival season. However, that doesn’t mean that the lineup is void of interesting and eye-catching titles. As always, TIFF is pushing boundaries when it comes to diversity behind the camera, with over 50 feature films directed by women and even more from ethnic minorities. The lineup includes some holdovers from Cannes and some that will come to the festival from Venice or Telluride. But for this list, we’re focusing on those titles that will be making their world premiere in Toronto, where I will be bringing you coverage from the ground. Come get excited with me!

While not a huge name, even in arthouse circles, the announcement of a new Terence Davies film is always a cause for celebration from those who know his work. I fell head over heels for his last film, the beautiful Emily Dickinson biopic “A Quiet Passion,” and his latest sounds even more exciting. “Benediction” is also a film about a poet; in this case, the 20th-century English poet and soldier Siegfried Sassoon. While Davies has dealt with issues of homosexuality before, this is the first time he is explicitly exploring love and desire between two men, which is cause for celebration, especially when the film stars the incredibly handsome Jack Lowden. The film’s period (during and after World War I) is one that is underexplored in cinema, especially as it concerns gay life, which makes it very welcome.

Just the preview image, dripping with sensuality, was enough to sell me on this one. Still, the plot is intriguing: Jessica Chastain (one of this year’s recipients of the TIFF Tribute Actor Award) and Ralph Fiennes star as a couple on the verge of divorce who accidentally run over a young local on their way to a lavish party in Morocco. They hide the body and attend the party, but afterward, the piper must be paid. Tales of beautiful, wealthy people doing ugly things to poorer people can quickly become grating, but this cast (which also includes Christopher Abbott, Matt Smith, Caleb Landry Jones, and Marie-Josée Croze, among others) is one that could easily overcome those potential pitfalls.

Sometimes, you just want to watch two movie stars do what they do better than anyone else, and that is precisely what Maya Forbes and Wallace Wolodarsky’s film looks to be giving us. Sigourney Weaver stars as a realtor with a self-destructive side who, while coming to grips with the idea that her best years may be behind her, reconnects with old flame Kevin Kline. Who doesn’t want to see these much-loved performers in roles worthy of their talents that could bring them back into the Oscar conversation? I know I certainly do.

After seeing what Florian Zeller did in adapting his play “The Father” to film last year, I’m even more excited to see what playwright Stephen Karam has up his sleeve as he brings his Tony-winning play to the big screen. “The Humans” is a wonderfully affecting play, deeply embedded in the Blake family’s interpersonal dynamics as they descend on youngest daughter Brigid’s brand-new apartment for the annual ritual of familial grievance-airing that is Thanksgiving. It’s not a surprise that such an acclaimed play would attract a top-tier cast. Karam has smartly gone for well-known actors who aren’t exactly superstars: Amy Schumer, Beanie Feldstein, Tony winner Jayne Houdyshell, and Oscar nominees June Squibb, Richard Jenkins, and Steven Yeun.

Anyone who grew up in the ’90s has a connection to Alanis Morissette’s “Jagged Little Pill,” one of the best-selling albums of all time. The hits from that album are still bangers, especially the raging howl of “You Oughta Know.” But while we see many documentaries about how young pop stars dealt with the high cost of fame, we’ve rarely heard the perspective of female rock stars. Twenty-one years old at the time of the album’s release, Morissette was right on the precipice of adulthood when fame hit, surrounding a profoundly personal, revealing set of songs that laid her scars and flaws bare in a way that few have. What does she think about it now? And how does that period of her life look to our eyes now in 2021? I’m excited for acclaimed documentarian Alison Klayman to tell us.

Mélanie Laurent. There are lots of reasons why “The Mad Women’s Ball” is intriguing, but mostly it comes down to one name: Mélanie Laurent. The actor-director has a unique sensibility as an actress that comes through in her direction of films like “Diving” and “Breathe.” After a brief detour through American independent film with “Galveston,” she’s back to writing her own material. Laurent has adapted Victoria Mas’s novel about a woman (Laurent’s “Breathe” star Lou de Laâge) unfairly institutionalized in a late 19th-century Parisian asylum where the director orchestrates a grand ball that preys upon his patients’ fantasies. The period where women were routinely committed for “hysteria” at the hands of men who feared what they couldn’t understand is one that should never be forgotten, and Laurent seems like just the person to drag those men for all they’re worth.

Zhang Yimou makes films that are, if nothing else, always gorgeous to look at. His latest takes place near the end of China’s Cultural Revolution and tells the story of a man who escapes a labor camp to see a newsreel in which his daughter has been immortalized, if only for the titular amount of time. Films about films often have a magic quality to them, and after a year-plus without cinemas, I’m feeling much more in need of that kind of magic. TIFF’s closing films don’t necessarily have an excellent track record, but this looks like it could easily be the exception to that rule.

Keira Knightley, Matthew Goode, and “Jojo Rabbit” star Roman Griffin Davis are leading the directorial debut from filmmaker Camille Griffin in what is said to be a dark British Christmas comedy taking place at a point when a mysterious poisonous gas is making its way to kill everyone on the planet. I’ve heard some say this is if “Melancholia” was a Christmas movie. Nothing could make me any more excited than that. The buzz on this one has been building behind the scenes as the mixture of absurdist comedy and bleak themes of facing the inevitable end with friends and family is a recipe for what will surely be a unique viewing experience. Add in other cast members Annabelle Wallis, Kirby Howell-Baptiste, Lily-Rose Depp, Lucy Punch, and Ṣọpé Dìrísù, and you have an ensemble worth the price of admission to get front row tickets for the end of the world.

Poor Ben Foster. The man has delivered great performance after great performance in films that have caught Oscar’s eye, but he’s never been nominated himself. In his latest role, he seems to be actively seeking that elusive first nomination, telling a story that seemingly includes all of AMPAS’s favorite things: He stars as real-life Jewish boxer Harry Haft, who had to literally fight for his life in a sadistic game while a prisoner at Auschwitz. A Barry Levinson film hasn’t been in cinemas since 2015’s Bill Murray vehicle “Rock the Kasbah.” Still, he’s directed the likes of Robert DeNiro and Michelle Pfeiffer to Emmy nominations for the HBO film “Wizard of Lies,” which also received an Emmy nomination for Best Television Movie. His follow-up, “Paterno,” saw him receive an Emmy nomination for Best Director along with another Best Television Movie nomination, so he hasn’t completely lost that touch that got lots of awards attention in the ’80s and ’90s. Is this a big return? I can’t wait to find out.

What a premise: George Mackay and Lily-Rose Depp meet in a clinic nicknamed “the zoo” where Paddy Considine is treating all the patients for the condition of “species dysphoria.” Mackay believes he is a wolf, and Depp believes she is a wildcat. If that alone doesn’t immediately intrigue you, then I’m not sure what will. This premise is full of potential and could end up being about anything. Nothing excites me more than going into a festival screening and not knowing what’s in store when the lights go down, and “Wolf” fits that bill superbly.

​What re you looking forward to seeing at TIFF this year? Will you be attending in-person or covering digitally? Let us know your thoughts in the comments section below or on our Twitter account.