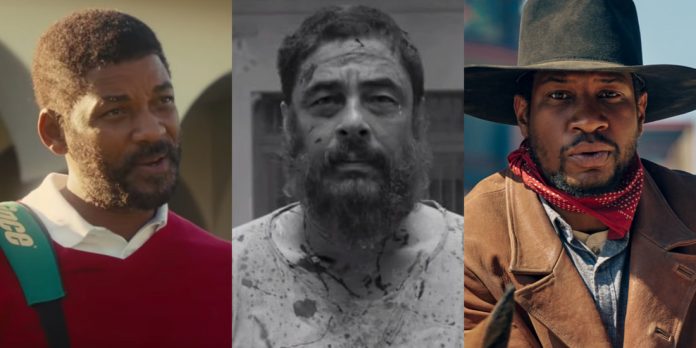 Whether a screenplay is “Original” or “Adapted” seems like an easy question. The WGA (Writers Guild of America) has its own standards for what constitutes adapted. However, The Academy writers’ branch disagrees. Seemingly every year, there are screenplays that the WGA and the studios submitting them for awards consideration considered to be “Original,” that the Academy reclassifies at the last minute as Adapted. While the WGA (and other awards like BAFTA) typically consider a screenplay “Adapted” if it is based on a play, book, article, or pre-existing film, the Academy opts for a more expansive view of what constitutes adaptation.

A24 considered “Moonlight” to be an original screenplay. Barry Jenkins adapted the film from an unproduced play, “In Moonlight Black Boys Look Blue,” written by Tarell Alvin McCraney. Like Original Screenplay winner “The King’s Speech,” A24 assumed that because the play was never performed, the Academy would deem the film’s origins as a play, not to be a pre-existing work from which the film was adapted, but rather, just a step along the script’s ultimate journey. “Moonlight” won the WGA award for Original Screenplay and was nominated for the BAFTA award for Original Screenplay. But the Academy had other plans. They felt the screenplay’s origins as an unproduced play were sufficient to classify it instead as Adapted. “Moonlight,” of course, would end up winning the Oscar in this new category. That same year, “Loving” was campaigned as an Original Screenplay and was even nominated for the WGA Original Screenplay award. It was not based on a play or book but rather had pulled some direct lines of dialogue from an HBO documentary about the Loving trial. This, too, was sufficient for the Academy to deem it Adapted. Thus, “Loving” was reclassified, and its WGA nomination ultimately did not translate to an Oscar nomination.

Other examples of reclassification include The Coen Brothers’ “The Ballad of Buster Scruggs,” which was primarily an original work but based one segment of the film on a Jack London short story. That was enough for AMPAS to shift it to Adapted. In 2000, the Coen brothers acknowledged that “O Brother Were Art Thou” was “inspired” by Homer’s The Odyssey. That loose connection was minimal enough to classify the film as original with the WGA, but it ended up going into the Best Adapted Screenplay category with the Oscars.

Some of the Adaptation scenarios seem especially stretched. Damien Chazelle wrote “Whiplash” as a completed screenplay and filmed a single scene from that script as a short film which he used to secure financing for the rest of the film. Even though the ‘short film’ was made from Chazelle’s original screenplay and not vice versa, the Academy shifted the film into the Best Adapted category to the shock of everyone, including the filmmakers. Meanwhile, Jane Campion’s “Bright Star” told an entirely original love story about the famous poet John Keats. Still, because the film featured some of his poems and letters, it was reclassified for Best Adapted Screenplay, where it was ultimately not nominated.

This year, the Best Original Screenplay category is particularly competitive with titles like “Being the Ricardos,” “Belfast,” “C’mon C’mon,” “Don’t Look Up,” “Flee,” “The French Dispatch,” “The Harder They Fall,” “A Hero,” “King Richard,” “Last Night in Soho,” “Licorice Pizza,” “Mass,” “Parallel Mothers,” “Red Rocket,” “Spencer,” “Titane,” “The Worst Person in the World” all battling it out for five slots.

Thus far, Adapted Screenplay is comparatively less competitive. Contenders like “CODA,” “The Humans,” “The Last Duel,” “The Lost Daughter,” “Passing,” and “The Tender Bar” are possibilities but lack the overwhelming critical support and/or Best Picture buzz to feel safe for nominations. “Cyrano,” “In the Heights,” and “The Tragedy of Macbeth” are types of films the writers branch has historically opted not to nominate (Musical adaptations and Shakespeare). Japan’s International Film submission, “Drive My Car,” could contend, but the film has yet to secure a domestic distributor who could campaign it for categories outside of Best International Feature Film. Only “Dune” and “The Power of the Dog” feel reasonably safe at this point in the category. We are awaiting reactions to “House of Gucci,” “West Side Story,” “Nightmare Alley,” and “Tick…Tick…Boom!,” but if one or two of those disappointed, suddenly the category becomes wide open and ripe for a field of unexpected contenders like we had in 2017 when “Logan” and “The Disaster Artist” snagged nominations. Alternatively, the field is wide open for some reclassifications of screenplays from Original to Adapted, which could completely shake up the Adapted Field.

The Harder They Fall
Jeymes Samuel’s western pulls real-life figures from American western history such as Nat Love, Rufus Buck, Stagecoach Mary, Bass Reeves, and Jim Beckwourth and plunks them in the middle of a fictional western shootout together. His screenplay is not adapted for any book or any single event in history. However, it does tread the same ground as his 2013 short film “They Die By Dawn.” The short film also took many of those exact historical figures (Nat Love, Stagecoach Mary, Bass Reeves, Jim Beckwourth, Bill Pickett) and plunked them in a fictional western gunfight. Indeed, certain scenes from the short, such as when Love enters Stagecoach Mary’s saloon only to be confronted by a shotgun in the face, are restaged almost identically in “The Harder They Fall.” Indiewire went so far as to refer to “The Harder They Fall” as an “expansion” of “They Die By Dawn.”

If “Whiplash” shooting a single scene from its already existing feature screenplay was sufficient to render it a Best Adapted Screenplay, “The Harder They Fall” feels even more likely to go that route. Indeed, it more resembles former Best Adapted Screenplay nominee “District 9,” an expansion of Neil Blomkamp’s short film “Alive in Joburg,” than it does “Whiplash.” Samuel may have ‘based’ “The Harder They Fall” on his own work, but in the Academy’s eyes, that is likely still sufficient to render it adapted.

The French Dispatch
Except for “Fantastic Mr. Fox,” Wes Anderson’s films tend to be distinctly original. His latest, a series of vignettes inspired by The New Yorker, is being campaigned as a Best Original Screenplay contender. But, like the Coen Brothers’ “The Ballad of Buster Scruggs,” at least some of the film’s vignettes are inspired by pre-existing material.

“The French Dispatch” goes beyond merely being a love letter to the New Yorker. Its segment “The Concrete Masterpiece” featuring Adrien Brody as an elusive art dealer is based on S. N. Behrman’s 1951 article “The Days of Duveen.” The “Revisions to a Manifesto” segment centering on student protests is based on Mavis Gallant’s “The Events in May: A Paris Notebook” about the same.

Admittedly the film’s “inspired by” status regarding those articles isn’t quite comparable to “based on” status used for “The Ballad of Buster Scruggs” since it explicitly adapted one of its vignettes from a Jack London story. Still, “O Brother Where Art Thou” was merely “inspired by” “The Odyssey,” and that was sufficient to render it adapted. If “The French Dispatch” is reclassified as Adapted, it could easily sneak its way into a thin field.

King Richard
Whether or not Zach Baylin’s “King Richard” script is ‘original’ has been the subject of litigation for the past two years. Companies TW3 Entertainment and Power Move Multimedia purchased the rights to Richard Williams’ memoir “Black & White: The Way I See It” and entered into negotiations with Warner Bros. Eventually, “King Richard” moved forward at Warner, ostensibly not based on Williams’ memoir. The parties settled for an undisclosed sum, and none of the promotional materials for the film claim the film is “based on” anything. Of course, a number of publications keep claiming the film is “based on” the memoir.

Still, “Ford v. Ferrari” initiated as an adaptation of AJ James’ book “Go Like Hell,” but Mangold’s team rewrote the film so that it didn’t resemble the source material at all and was thus able to pass as an Original Screenplay. Additionally, Joaquim Trier’s “The Worst Person in the World” is considered the latest installment in the director’s Oslo trilogy, but the narrative connection is so tenuous that it is unlikely enough to render it as a Best Adapted Screenplay contender.

What do you think? Do you believe either one of these three films could switch their campaigns and contend in the Best Adapted Screenplay category this year? Take a look at our latest predictions for that category here and Best Original Screenplay here and let us know your thoughts in the comments section below or on our Twitter account.