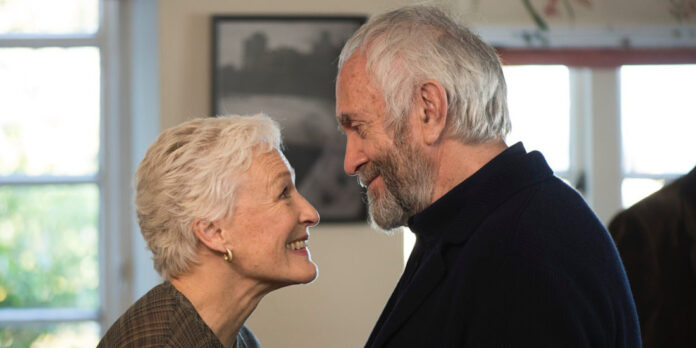 THE STORY – Joan and Joe remain complements after nearly 40 years of marriage. Where Joe is casual, Joan is elegant. Where Joe is vain, Joan is self-effacing. And where Joe enjoys his very public role as the great American novelist, Joan pours her considerable intellect, grace, charm and diplomacy into the private role of a great man’s wife. As Joe is about to be awarded the Nobel Prize for his acclaimed and prolific body of work, Joan starts to think about the shared compromises, secrets and betrayals.

​​​Ever heard the phrase, “Behind every great man there is a great woman?” Björn Runge’s film “The Wife,” written by Jane Anderson, attempts to provide a twist to that phrase, presenting a man who on the outside may appear great to those who only know his work, but on the inside is an evil man filled with insecurity and selfishness. Behind this supposedly great man is his wife, played by Glenn Close, in one of her best on-screen performances. Set over the course of a weekend in Stockholm, Sweden, “The Wife” depicts a marriage finally reaching its breaking point after 50 years of lies and disrespect.

“Without this woman, I am nothing,” Joe Castleman (Jonathan Pryce) states repeatedly to his colleagues, friends, family members and admirers, as his wife Joan Castleman (Glenn Close) watches on with a mixture of pride and resentment. Joe has been chosen to accept the Nobel Prize in Literature after writing for over fifty years. He and his wife have been married for just as long and have built a beautiful life for themselves with their two children and grandchild coming along the way soon. The truth of the matter is, Joe is not really that great of a writer, and unbeknownst to anyone, it has been Joan who has written his stories for years. Now, in their golden years, Joe is receiving the highest honor in his profession that should rightfully be Joan’s.

“The Wife” is not the most well-made film in the world. Awkward shots, some inconsistent editing, and a bland color palette don’t make the film stand out in the visual sense. However, the carefully constructed characters of Joan and Joe, brought to life by the performances from Jonathan Pryce and Glenn Close are masterful and help to keep the audience invested in this ticking-time-bomb of a movie. We can feel Joan’s pain in Close’s every glance and the slightest reaction. We are shown through flashbacks (with Harry Lloyd playing Young Joe and Close’s daughter, Annie Starke, playing young Joan), how Joe manipulated Joan into ghostwriting for him. He scares her into believing no one will read a woman’s published writing. In addition, Joe displays early inadequacy and infidelity which do not get better with age. “The Wife” portrays Joan as the stronger of the two Castlemans through her endurance throughout their marriage.

Joe continuously proclaims his love for Joan almost as though he’s always trying to convince her to stay with him. He’s completely unaware of the damage he has caused to this extraordinary woman. Joe feels that the two are a team and that this honor is one that the two should share. However, it’s not Joan’s name being called out. She’s not the one that all of the reporters and scholars wish to speak to. This is her moment, for her lifetime of hard work both professionally and personally. Instead, Joe continues to show signs of infidelity, disrespect, and arrogance. While most of the focus will be on Close for her devastating performance, “The Wife” is a two-hander with Pryce not being afraid to rise to the occasion. In the process, he delivers one of the best villainous turns of 2018.

Close is a highly respected veteran who has been in the industry for decades, and in “The Wife” she delivers one of her best performances to date. Throughout the film, she is reserved, harnessing an internal rage so palpable that we know it is only a matter of time before it explodes, in the third act. Despite this telegraphed approach to her performance, she still manages to knock her big moment out of the park as Joan unspools years of frustration, neglect, and desire for validation from Joe, and in some cases towards herself. Her interactions with her husband during this weekend in Sweden are not the only sparks which light the match. Their son David (Max Irons), is also with them for the weekend, and he wants nothing more than his father’s approval for his work, which he cannot seem to ever get from him. Nathaniel (Christian Slater), an admirer obsessed with Joe, is writing a book on him and his accomplishments but suspects that Joan is the true genius of the two. Both of these painful interactions remind Joan of the kind of a man Joe has been towards her for decades, fueling her rage.

We often think about how the relationships between men and women have changed and grown from a time period such as the 1950’s to today. “The Wife” makes a cultural statement by showing an alternate perspective of sexism in the #MeToo era. By exploring an abusive relationship that began in a different time period, the film explores the empowerment of older women in the modern age, with Joan finally reaching clarity about her marriage after years of internalizing insidious attitudes about the roles of women in society. “The Wife” gives a voice to women of Joan’s generation, to speak up against the imbalance of power between men and women personally and professionally. Joan sacrificed her dreams to a man whom she admired, whom she felt could provide her security and whom she thought, that as a team, could make a difference in the world. It’s a lie that Joe, who if he had any amount of respect for his partner in life, should’ve shot down. Instead, he selfishly could not let go of his pride and slowly, but surely, over the course of decades of false happiness, their marriage inevitably comes to its complex and emotionally gutting conclusion. Their relationship serves as a poignant symbol for many marriages, which still sadly exist due to an imbalance of power which stems from decades of abuse, privilege, and deceit.