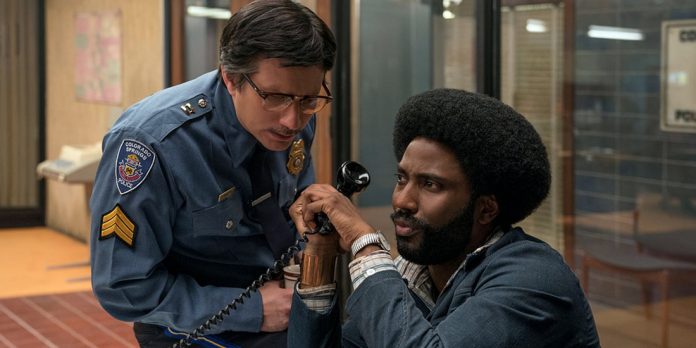 Spike Lee made a quality comeback in “BlacKkKlansman,” with the majority of critics and audiences heralding this as his best work in decades. Even though “The Meg” led the box office results this weekend with a surprising $45 million, “BlacKkKlansman” is the movie that everyone is talking about. “BlacKkKlansman” has led to important societal discourse, but before I move on, it would be dishonorable to undercut its box office: it made over two-thirds of its budget ($10.8 million) back in its first week of wide release. Some have debated the historical accuracies the film puts forth, others have reported how groups of people responded collectively while watching it. But the most common direction of conversation is veering toward comparison to current political events. Many have taken to solemn reflection of the film’s message on the anniversary of the white supremacist riot in Charlottesville, Va., (I would argue, Charlottesville was the impetus for Lee’s motivation behind the film.) and drawing comparisons between the facts and attitudes embedded in the plot and characters mirroring the current political landscape in the rise of President Donald Trump.

There’s no denying: this is the film of the moment. Perhaps, historians will memorialize this film as the one that best represents 2018 socially, culturally, and artistically. “The Post” represented 2017 by illustrating a correlation between Trump’s aggressive, anti-intellectualism and “fake news” campaign to President Richard Nixon’s attack on freedom of the press. In addition, “The Post” also depicted 2017 in the #MeToo phenomenon and Hillary Clinton’s historic run and failure as the first woman President resembles the story of Meryl Streep’s character’s, Kay Graham, rise to power as a businesswoman in the 1970s. The year before that, awarding another culturally relevant film called “Moonlight” the Oscar for Best Picture award turned out to be the ultimate act of defiance.

To say racial tensions have exacerbated under President Trump is to put it mildly. In “BlacKkKlansman,” Lee takes on the Trump administration’s race relations and white supremacy in the same vein as Spielberg challenged their stance on freedom of the press. In fact, I would argue Lee goes further than Spielberg did. He metaphorically grabs the Trump administration by the horns (yes, they have horns) and uses the story of Ron Stallworth to expose the obvious fact that a man whose philosophy, rhetoric, and policy decisions align with the mission of the Ku Klux Klan is running the federal government of the United States of America. In addition, Lee wants to underline in red ink the fact that violent social groups holding white supremacist attitudes are not a thing of the past. They exist today and they are the types of people who rioted in Charlottesville, Va., in 2017. Stallworth’s story is akin to the modern day. It’s almost the same script, different cast, but worse: someone who supports condones, and excuses violent white supremacy has political authority and power.

Evidently, Lee’s efforts are getting through to audiences. As entertaining as the basic plot of Stallworth’s undercover cop plot is orchestrated by Lee, attributes of his directing go further than just a reiteration of the story. In his directing, Lee uses some similar techniques used in other recent post-modern cinematic hits such as “Get Out,” which makes it easy to connect to audiences of the moment. Yet, there are satirical and self-aware methods Lee deploys in this film that are unlike anything I’ve ever seen before, in particular with the opening and closing of “BlacKkKlansman.”

In the world of award show prognosticating, “BlacKkKlansman” is the center of the conversation right now. By far, the Oscar frontrunner for Best Picture, Best Director, and Best Adapted Screenplay of all the films released domestically thus far into the year. In addition, the reviews from notable critics have been superb; it scored praises from The New York Times and Los Angeles Times, which helps due to the fact that the majority of Academy members reside in either of those areas.

The problem I see for “BlacKkKlansman” is the fact that it’s reaching its apex so soon. (Ironically, it has the exact opposite problem of “The Post,” which was released too late, and yet could end up with the same around of nominations due to that fact of release date.) It has our attention now – in August – before phase one of award season (the festival circuit) begins. It will be an enormous challenge to sustain the unflinching focus of Academy voters during the prime time of when quality and baity films are released, from October through December. Films like “A Star is Born,” “Roma,” “Backseat,” “The Favourite,” “The Front Runner,” “Boy Erased,” “Mary Queen Of Scots,” “First Man,” “Beautiful Boy,” “On The Basis Of Sex,” and “Widows,” to name a few, haven’t even been screened yet for critics, and all carry political and social weight of their own. 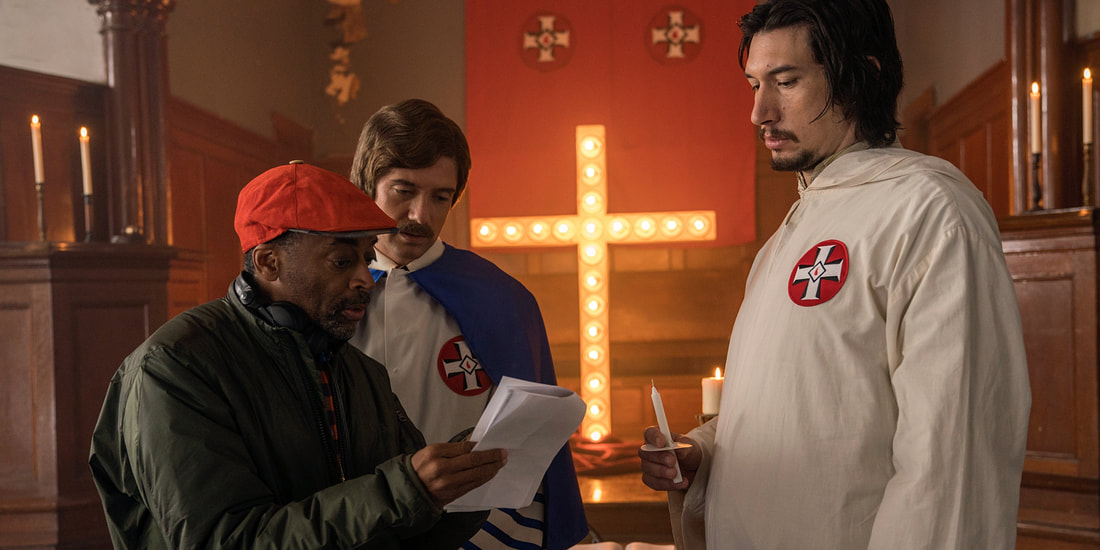 It’s not impossible to maintain the buzz it has now until nomination-voting for the Academy Awards. For example, “Get Out” was released in February 2017 and swept critics associations’ awards at the end of the year. If critics will go to bat for “BlacKkKlansman” in a similar way or if the film keeps its buzz alive in some other way, it’s certainly possible the film will remain in the higher echelon of movies from which the Academy picks its nominees. But I’m nothing if not circumspect, especially when there is a systematic disadvantage, like having a summer wide release date before the film festivals. So let’s break the film’s possible nominations down:

1. Best Adapted Screenplay
This an iron-clad bet for a nomination and could be where the film could receive a win from the Academy. (Lee’s name here helps because there is so much goodwill directed at him specifically, for his effort and his overall career. Lee winning an Oscar would be a big deal.) There are ten possible films that could receive screenplay nominations, five of each category, adapted and original, which helps thin out the competition. Unfortunately, adapted is probably more competitive than original screenplay this year. That being said, the script should be fine for a nomination. It’s based on a true story, balances comedy and drama well, and is tied to current events as tightly as possible. Spike Lee was also nominated in this category for the masterpiece of his career, “Do The Right Thing.” If “BlacKkKlansman” wins Best Adapted Screenplay, he will have won in back-to-back years as Jordan Peele for “Get Out.” Peele was the first African American man or woman to win the category. Lee could be the second.

2. Best Picture
Luckily for “BlacKkKlansman,” the Academy still operates on a sliding scale from 5 to 10, and not simply limited to five nominees. There’s enough room in the category that a weighty summer release with reception such as this and the star power of Lee, along with the inclusivity of the Academy’s new members, it’s probably safe for a nomination. The political and urgent nature of the film’s social commentary will also be a strong argument for the Academy to keep the film around. “BlacKkKlansman” will be the “important” film of the year and get enough votes due to that by itself, let alone votes from Academy members who are fans of its film style and story. It’s not guaranteed Best Picture nominee, but I would say it’s likely. (If the Oscars were held today, it would likely win Best Picture, but that’s beside the point.) It did compete for the Palme d’Or and won the Grand Prix at the Cannes film festival in May, so at least “BlacKkKlansman” isn’t going into the Oscar race without any festival exposure.

3. Best Director
This is going to be the most difficult above-the-line nomination for the film to clinch. There can only be five nominees, and as stated above, there are many baity films still yet to be seen and have a seismic buzz. Lee will face steep competition in this category. He’s very much in the running, but it’s not a safe bet. Alfonso Cuaron, Yorgos Lanthimos, Bradley Cooper, Adam McKay, Jason Reitman, Josie Rourke, Damien Chazelle, Barry Jenkins, Steve McQueen, and Karyn Kusman – these are all directors whose films have yet to be seen. On top of previous winners and nominees, you have acclaimed directors who finally have a baity project with which to campaign. And sometimes release date and being seen the most recently is the key to getting major nominations such as Best Director. It also hurts his chances to note, Lee has never been nominated for Best Director. There’s no precedent this branch of the Academy are fans of his work as an auteur. In addition, “BlacKkKlansman” has great reviews, but I would argue they don’t top some of his work in the 80s and 90s.

4. Best Actor, Best Editing & Best Costume Design
The realistic part of me wanted to conclude this piece after Best Director because “BlacKkKlansman” receiving any other nominations is a long shot. Unless for some reason the Best Actor field noticeably suffers from lackluster contenders that appear attractive now, or the film editing branch drifts away from release-friendly movies, or the crafts department specifically take to the film, it probably will be lost in the shuffle of bigger names and imminent films. The quality exists for the film to receive these nominations, so it’s a matter of feasibility. John David Washington is a nomination that may happen based on quietly accrued breakout star buzz, one for which I’d watch out if the signs are there. The editing is part of what makes Lee’s vision and message come together with such specificity. It has some unique aspects about which to boast: cross-cutting parallel scenes, the melding of cinematography with drastically distinctive lighting, and the manner in which it weaves in classic Hollywood films, such as “The Birth Of A Nation” and “Gone With The Wind,” and news footage of President Trump and the Charlottesville riots.

For now, I’m predicting Best Picture and Best Adapted Screenplay nominations, with the film having an outside shot at Best Director.

What do you think? Will “BlacKkKlansman” be successful at the Oscars and sustain its buzz over the coming months? Which nominations do you predict? Let us know in the comments section below.