“THE WAR WITH GRANDPA” 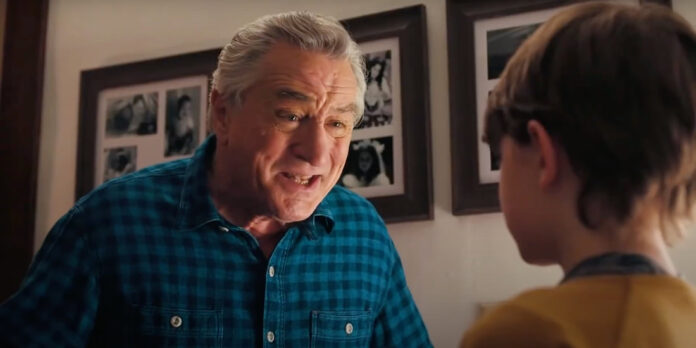 THE STORY – Peter and his grandpa used to be very close, but when Grandpa Jack moves in with the family, Peter is forced to give up his most prized possession: his bedroom. Peter will stop at nothing to get his room back, scheming with friends to devise a series of pranks to drive him out. However, grandpa doesn’t give up easily, and it turns into an all-out war between the two.

While many news stories were written on the repeated delays of “The New Mutants” prior to its eventual release this past August, another film has taken even longer to arrive than that. “The War with Grandpa” began filming in May 2017, a full two months before cameras started rolling on “The New Mutants.” Finally, more than three years later, this Robert De Niro-starring children’s film is here. Unfortunately, the film isn’t exactly worth the wait.

The film finds De Niro playing the titular Grandpa, Ed, to 12-year-old Peter (Oakes Fegley). When Ed must move in with Peter and his family, thus kicking Peter out of his room, this ignites, well, a war. Look, the title is pretty self-explanatory – Peter’s frustration over being moved to the attic gets the better of him. He declares war on Ed and begins a series of pranks. Ed doesn’t give in, and accepts Peter’s declaration and responds in kind, all while keeping Peter’s parents (Uma Thurman and Robb Riggle) unaware. Their pranks include replacing shaving cream with self-hardening insulation; Ed rigging Peter’s bed to fall apart; and Peter rigging speakers on a remote control car to wake him up.

Adapted from the book of the same name, this film is pretty straight-forward. Given that it’s a kids’ movie, the jokes can be pretty low brow. Ed rewrites Peter’s homework and fills it full of fart jokes. Let me be clear: I’m not above fart jokes, but so much of the film doesn’t even try to elevate the writing. At one point, Peter is telling his friends about the prank war, and he says, “I was up all night.” His friend responds with, “Diarrhea?” That’s the whole joke. While I’m sure elementary and middle school-aged kids might enjoy some of these weak attempts at humor, it’s a small window for laughs.

Thankfully, the prank war isn’t mean-spirited for the most part. Ed isn’t angry with his grandson; he’s just going along with it. This helps keep the film light-hearted. Ed enlists some friends to help him in his prank war, getting Christopher Walken and Cheech Marin in on the action. Jane Seymour eventually joins the team, too, as well as becoming a love interest for Ed.

So much of “The War with Grandpa” feels utterly cheap. It plays more like a Disney Channel Original Movie that somehow got Robert De Niro and Uma Thurman to sign on. When we first meet Walken’s character, Ed asks him to demonstrate his Onewheel – essentially a hoverboard that rides on just one wheel. Of course, Walken can’t ride one in real life, but the crosscutting between Walken’s face and a stuntman riding the Onewheel is so amateurish. It’s embarrassing to watch, and these legendary actors are better than this.

There’s some heart to the film, though, and much of it is thanks to the dedicated performance of Fegley. While the material doesn’t give him much to work with, Fegley plays the emotions straight. He never takes the bait to make these jokes overly broad. Many child actors, including the ones playing his classmates here, tend to overplay the humor with exaggerated expressions. Fegley walks with more subtlety, even if the material is pushing him to go broader. Between this and “The Goldfinch,” Fegley is clearly a young actor to keep an eye on who shines even with lesser material.

While “The War with Grandpa” didn’t work for me, it may keep younger kids entertained for the most part. One young man behind the scenes is largely responsible for making sure that this film would reach that target demographic: Tre Peart is a credited producer on this film at only 15-years-old. As a fan of the book, he pitched it as a movie to his parents, who made it happen. Peart was on set every day making sure this film would make kids like him laugh. Here’s hoping his dream will come true, and that he keeps up the hard work in the future.