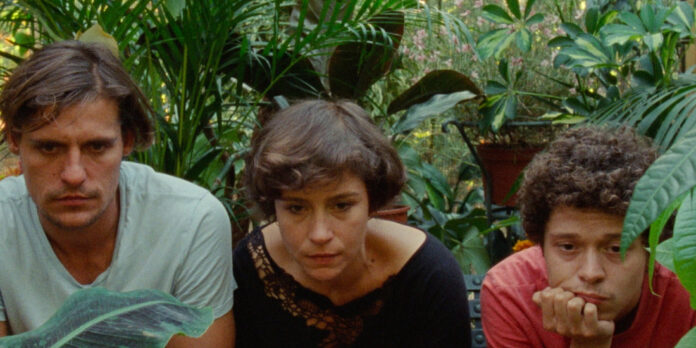 THE STORY – Three friends pass their time in a spacious farmhouse where the dog days of summer are filled with dancing, chores, disturbed sleep patterns, building projects, the sound of cicadas, and flirtations.

​​In case you’re wondering what’s up with the strange title of this most distinctive film, there’s a simple explanation: “Tsugua” is “August” spelled backward, which should give you a clue as to how this unusual film’s story is told.

“The Tsugua Diaries” structures its COVID-era narrative to begin at the story’s conclusion and then work back in time so that the film’s final scene is the first scene of its story. And that’s not the only unexpected element of the film, which is a first-time collaboration between documentarian Maureen Fazendeiro (“Black Sun”) and festival favorite Miguel Gomes (“Tabu”) that has one foot solidly in the documentary world and one in the narrative — though not in a way you might expect. Shot in August and September of 2020, “The Tsugua Diaries” is the first big film that I’ve seen in which COVID and its protocols are followed behind the cameras and serve as an essential plot point onscreen.

“The Tsunga Diaries” begins on Day 22 of its story with the film’s three principals — Carloto (Carloto Cotta), João (João Nunes Monteiro), and Crista (Crista Alfaiate) — grooving together in a three-person dance party. There’s an undercurrent of sex going on here, suggesting an alternative take on “Y Tu Mamá También.” Before we know it, however, we take a step backward to Day 21, where plans for that dance party are being made, as the trio admires their new butterfly greenhouse, then back a day to see that greenhouse being built. And backward and backward and backward.

The narrative continues in reverse until…wait, isn’t that a sound guy wearing a COVID mask caught in the corner of the frame? And who’s this messenger carrying something onto what looks like a movie set? And is that directors Fazendeiro and Gomes conferring on camera? It’s at this moment that “The Tsugua Diaries” goes meta, and we begin to realize that we’re watching a movie within a movie. Or, more accurately, a fictional movie about a fictional documentary about the making of a fictional movie. The mind reels.

Telling a story in reverse order can be a tricky proposition. When it works, such as in Harold Pinter’s acclaimed play and film “Betrayal,” the back-to-front model can serve to illuminate each character’s journey and draw us even closer to them. When it doesn’t (“Merrily We Roll Along,” anyone?), it just seems gimmicky and becomes ultimately annoying. “The Tsugua Diaries” never feels annoying — it’s too light and good-natured for that — but it manages to add very little to our involvement with the story.

To be sure, “The Tsugua Diaries” isn’t without its charms. There’s something appealing about its “as long as we’re all here, let’s make a movie” vibe, and its sunny settings and loosey-goosey aesthetic has the feeling of a three-week vacation in Portugal with people you know and like. Plus, there’s the comfort of seeing folks not being cooped in quarantine by themselves but instead forming a makeshift community just trying to get a movie done.

Still, there’s a certain slightness to “The Tsugua Diaries” that is only emphasized by the back-to-front technique that feels cumbersome here. If you’re going to go to all the trouble of telling your story this way, at least give your leads more discernible character arcs so they can be seen changing or at least learning something along the way. There’s little if any growth here — these characters remain pretty much the same throughout the entire narrative. Yes, one actor does break COVID protocols to take off to the beach one day, but if that’s your primary dramatic conflict, you’ve got much bigger problems.

Given the fact of the setting’s visual beauty, you may just want to sit back and treat “The Tsugua Diaries” as a two-hour vacation in the country. But if you choose to engage with the film’s back-to-front story, you might find that for all the effort you will put into the film, you may very well get little back in return.