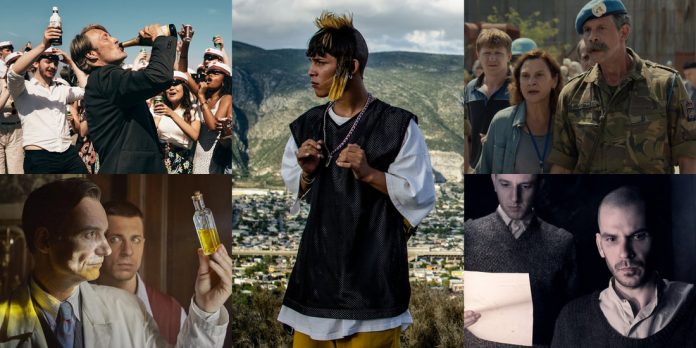 By Tom O’Brien
​
Where did all of our guideposts go?

As this past year has become a challenging one for people worldwide, Oscar prognostication would have to rank pretty low on any list of what’s important to humanity at this time. Still, it provides one stabilizing bit of normalcy for many of us during an abnormal time. Yet, even the Oscar season has been affected by the worldwide shutdown. For example, the landscape for one Oscar category, Best International Feature, has been arguably the most altered for award prognosticators. By this time in any typical Oscar year, we would have gotten reactions to the year’s crop of foreign-language films from festivals like Cannes, Telluride, Venice, Toronto and New York, among others and have a pretty good idea on where to place our money toward this category’s nominations.

This year, however, all bets are off.

Yes, we have tidbits of information. Denmark’s “Another Round,” for example, swept four top categories at the European Film Awards and “Night of the Kings” from the Ivory Coast took the Amplify Voices Award at Toronto. Except for the in-person festival in Venice, most of this year’s fests were held virtually, allowing films to be screened, but depriving us of the after-screening buzz that helps to solidify the festival standouts that often lead to Oscar nominations.

Still, I’ve been keeping track of online reactions to virtual screenings and come up with ten titles that seem to have attracted the most attention thus far. Let’s count them down and weigh their strengths and weaknesses.

The reunion of director Thomas Vinterberg and star Maks Mikkelsen, who previously teamed up for the Oscar-nominated “The Hunt” in 2012, has resulted in this dark comedy that recently swept the European Film Awards (Best Picture, Actor, Director, and Screenplay). Mikkelsen, who is generating long-shot nomination talk for his performance, is one of a quartet of schoolteachers who, frustrated with trying to teach bored teens, decide to see how drinking alcohol during the workday affects their performance in the classroom. International Feature is a category that has yet to take shape fully, but if there was any film that could be considered a front-runner, “Another Round” is the one.

For years there was a dark joke among Oscar prognosticators that if there was a film about the Holocaust in the running, predict it, and more often than not, you’d be right. These days, Holocaust-themed films are fewer in number, but with Slovakia’s choice, “The Auschwitz Report,” we may have an important new contender. The film is directed by Peter Bebjak and based on Alfréd Wetzler’s novel “What Dante Did Not See,” follows two Jewish Slovakians, Freddy (Noel Czuczor) and Valér (Peter Ondrejicka), who escape from Auschwitz and are determined to let the world know of the horrific acts that the Nazis are perpetrating behind concentration camp walls. The film (along with “Another Round“) is set for release in Spring 2021 from Samuel Goldwyn.

Director Agnieszka Holland is no stranger to this category with three previous nominations (“Bitter Harvest,” “Europa, Europa,” and “In Darkness”) and a nomination this year for the Czech Republic would mark the third country that her films have represented (Poland and West Germany being the other two). “Charlatan” focuses on the true story of unconventional healer Jan Mikolášek, who successfully treated Czech citizens with medicinal plants until the Communists stepped in to stop it. Holland’s admirers will likely be anticipating “Charlatan,” which Strand plans to release in the spring of 2021.

Like last year’s “Honeyland,” which managed to be nominated for both Documentary and International Feature, Alexander Nanau’s documentary “Collective” is looking to repeat that same double nomination. “Collective” is in the tradition of great journalistic films as we follow a real-life investigative team probing the causes of a deadly nightclub fire where the death toll keeps rising weeks after the tragedy. Simultaneously, the owner of a major pharmaceutical firm dies and a health minister steps down from the job. These three events are apparently unrelated — until it’s shockingly revealed that they’re not. “Collective” is currently available for rent on VOD.

The official entry from Mexico is a musical drama set amid the street gangs of Monterrey. There, 17-year-old Ulises (Juan Daniel Garcia Treviño) is the leader of a gang called Los Terkos, which is being threatened by a more powerful criminal enterprise, Los F. However, when a member of Los F is shot, Ulises is mistakenly targeted by Los F as the one who set up the hit, forcing him to flee for his life by illegally crossing the American border where he makes his living as a dancer on the streets of Queens. The decidedly different “I’m No Longer Here” has had an advantage over much of its competition for a nomination since it’s been available for voters to screen on Netflix since May.

Poland’s Oscar entry holds the distinction of being the first international selection to be announced way back last August and had its world premiere at the Venice Film Festival. Directed by Małgorzata Szumowska and Michal Englert, the comedy/drama stars Alec Utgoff (“Stranger Things“) and follows a Ukrainian immigrant (Utgoff) who sets up his massage practice in a gated community, soon becoming regarded as a guru by his clients in the neighborhood. With dramatic comedies often having a better chance at a nomination here than for Best Picture, don’t count out Poland in this Oscar race, as has in recent years turned into a potent Oscar player, scoring a win in 2014 for “Ida” and nominations for 2018’s “Cold War” and just last year for “Corpus Christi.”

“Night of the Kings” (Ivory Coast)

Winner of the Amplify Voices Award at this year’s Toronto Film Festival, writer/director Philippe Lacôte’s prison-set drama focuses on a young pickpocket dubbed “Roman.” The latter is sentenced to the dangerous La MACA prison in the southern part of the Ivory Coast. Tradition has it that every time that there is a red moon at night, the prison newcomer has to offer a tale that extends from sundown to sunrise, or else life there will become even more unpleasant. As Roman weaves his story a la Scheherazade, Lacôte manages to juxtapose prison life’s brutality with haunting images of magical realism in Roman’s tale. The Ivory Coast has not been much of an Oscar player since its 1976 win for “Black and White in Color,” but with “Night of the Kings,” it may return for the big prize again this year.

“Quo Vadis, Aida?” is tough stuff. The Bosnia and Herzegovina entry examines the horrifying 1995 massacre of 8,372 residents of the Bosnian town of Srebrenica as seen through the eyes of Aida (Jasna Đuričić), a local resident who works as a translator for the UN. Director Jasmila Žbanić’s decides to depict the vast horror of the massacre through Aida. Her UN pass gets her behind the scenes to get to the root of the murder and also gives the audience someone to care about in the grisly surroundings. The film, which garnered strong reviews at the Venice and Toronto Film Festivals, provides a powerful depiction of an important subject, very often the key to winning the Oscar.

The story behind “A Sun” is one of the more unusual in this year’s Oscar race. Chung Mong-hong’s epic 155-minute family drama initially premiered at the 2019 Toronto Festival and was followed by a January release on Netflix. The problem with that January date was that most of the critics who would likely champion the film was busy covering Sundance, and “A Sun” soon took its unfortunate place among the vast number of international films that Netflix acquired but offered little promotion. Cut to earlier this month when Variety critic Peter Debruge unexpectedly named “A Sun” the best film of 2020, followed by an equally laudatory Indiewire article by Tom Brueggemann detailing how “A Sun” fell through the Netflix cracks and why it deserves serious Oscar consideration. It’s a long way until the March 15 Oscar nomination announcement, but becoming a deserving cause to celebrate is not a bad way to attract voters’ attention.

Last year, France famously skipped over the acclaimed lesbian drama “Portrait of a Lady on Fire” as its Oscar representative. Still, it seems that they haven’t made that mistake again by selecting “Two of Us,” a love story focusing on Nina (Fassbinder muse Barbara Sukowa) and Mado (Comedie-Francaise veteran Martine Chevallier). They live in separate flats across the hall from one another. To friends and family, they are merely neighbors, but in reality, they are long-time lovers and remain so until a tragic event threatens to separate them forever. Director Filippo Meneghetti offers a beautiful story about love among the elderly, a subject rarely seen on film (rather it be gay or straight) and one to which Academy voters of a certain age (of which there are many) may respond.

We can just as easily have ten different films make the International Feature shortlist, which is set to be announced on February 5th 2021, as the race is that fluid. Should any of them cross your path, however, make every effort to see them, as they offer a wide variety of perspectives, which we could all use right now. You can check out our latest Oscar predictions here and let us know your thoughts on the every shifting complexities of the Oscar race on our Twitter account.