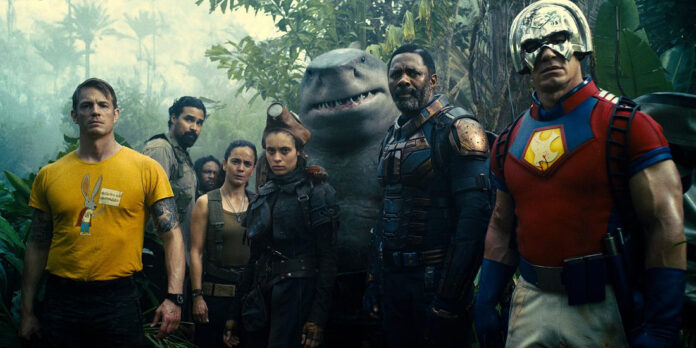 THE STORY – The government sends the most dangerous supervillains in the world — Bloodsport, Peacemaker, King Shark, Harley Quinn and others — to the remote, enemy-infused island of Corto Maltese. Armed with high-tech weapons, they trek through the dangerous jungle on a search-and-destroy mission, with only Col. Rick Flag on the ground to make them behave.

Placing a “The” in front of your title makes a strong statement that your version is the definitive version compared to the film which came before it. That’s exactly what James Gunn (“Guardians Of The Galaxy“) has done with “The Suicide Squad.” Wiping the slate clean and effectively serving as both a sequel and a reboot to David Ayer’s disappointing (but still Oscar-winning) 2016 “Suicide Squad,” Gunn has brought his highly unique vision not only to the returning characters but also to the new ones, which results in the film we should’ve gotten to begin with. Sometimes major studios do learn their lessons, and the world is all the better for it. “The Suicide Squad” is a wild, wacky, and creative superhero film filled with bloody gore, immature jokes, and a startling focus on character rather than spectacle, making it one of the best superhero films we’ve received in a while.

Amanda Waller (Viola Davis) has once again assembled the Suicide Squad (referred to as Task Force X) to storm the beach of Corto Maltese, an island where a military coup is taking place. The mission is called Project Jotunheim. Once the team makes it past the beach, their goal is to find the Jotunheim scientific research facility and destroy it before the military realizes what’s inside of it. Team 1 consists of Harley Quinn (the ever-reliable Margot Robbie), Rick Flag (a much better Joel Kinnaman), Captain Boomerang (Jai Courtney), TDK (Nathan Fillion), Mongal (Mayling Ng), Javelin (Flula Borg), Savant (Michael Rooker), Blackguard (Pete Davidson) and Weasel (hilariously voiced by Sean Gunn). They face overwhelming odds on the beach while Team 2, consisting of Bloodsport (Idris Elba), Nanaue aka. King Shark (an effortless yet effective vocal performance from Sylvester Stallone), Ratcatcher 2 (breakout star Daniela Melchior), Polka-Dot Man (David Dastmalchian), and Peacemaker (John Cena as an aggressively patriotic frat-bro answer to Marvel’s Captain America), receives an opening to infiltrate the jungle and make their way toward Jotunheim. Not all of them will survive, and if they choose to desert the mission, Amanda Waller is waiting and ready to flip a switch and blow a tiny explosive in their head. In other words, the mission is suicide, but as Rick Flag says, “That’s kind of our thing.”

When you hire James Gunn to start over with your franchise property, essentially, you have to know what it is you’re signing up for. The guy is an absolute madman in the best possible sense of the world. His brilliant imagination is all over this film in the way he uses color (the final scene’s contrast of bold colors against the rainy white background is visually striking), animation (one fun sequence involving Harley Quinn disposing of henchmen features 2D flowers and animals), and of course, the rocking soundtrack. He even makes the film’s “final-boss” villain a towering colorful Starfish kaiju. What?! That’s not even half of it, as most of the fun which comes from watching “The Suicide Squad” is letting the strange choices made by Gunn play out not just for their humor but also for their unexpectedly heartfelt power.

Taking the sensibilities he applied to the “Guardians Of The Galaxy” movies, James Gunn knows how to take a band of misfits and somehow, despite their unique idiosyncrasies, make them work together as a unit and get us to care about them individually. There is a strong emphasis placed on character development in “The Suicide Squad,” far more than we typically receive in this genre. We’re used to seeing the lead character receive a complete character arc by the time we get to a film’s climax but realizing this is an ensemble film, Gunn somehow manages to give full motivations, backstories, setup, and payoff to multiple characters, all the while never losing focus of the action set pieces that today’s modern-moviegoing audience turns up to see at the cinema.

To go into detail on these arcs would be a massive disservice for those who want to experience the movie as fresh as possible but suffice to say, Harley Quinn and Rick Flag’s relationship feels more natural, Amanda Waller is better utilized this time around as a fiery “don’t mess with her” force coordinating and pushing back on the Suicide Squad, Bloodsport is an upgrade from 2016’s Deadshot (sorry Will Smith), Ratcatcher 2 has the most emotional arc of the group with the best payoff, while Polka-Dot Man and Peacemaker receive a surprising amount of focus and screentime which results in some of the film’s best shocks. Nanaue steals the show as the bloodthirsty great white shark with the brain of a child who just wants to have some friends. There are many other characters as well, some of whom are played by very big-name actors, but these are the ones who leave the biggest impression. It’s already a testament to Gunn’s abilities as a storyteller that he’s able to juggle that many storylines and character arcs in a less than two and a half-hour run time.

Despite what you may think of this odd-ball group of mismatched villains forced to play the role of “heroes,” they each have a purpose, not only in service to the story, but that’s the more prominent theme Gunn is working with here through each of these characters. Gunn has made a film that will speak to the outcasts and those looking for a second chance at life. A chance to make things right, no matter how bleak the world may become. It’s all about finding a group you belong to, discovering your purpose, and using what makes you unique to do better in the world. I didn’t think I would be saying this after the 2016 film, but I am more excited and ready than ever to see more adventures from “The Suicide Squad,” especially if it’s coming from the wonderfully demented mind of James Gunn.