“THE SPACE BETWEEN US” 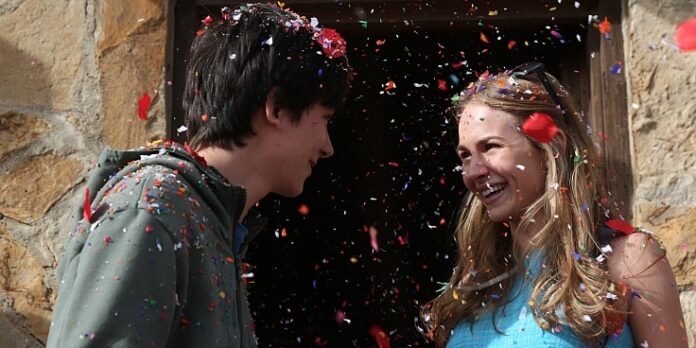 THE STORY – Gardner Elliot, the first human born on Mars, begins an online friendship with Tulsa, a teen in Colorado. On his maiden voyage to Earth, the 16-year-old finally gets to experience all the joys and wonders of a world he could only read about. Problems arise when scientists discover that Gardner’s organs can’t withstand the atmosphere. United with Tulsa and on the run, the interplanetary visitor races against time to unravel the mysteries of how he came to be, and where he belongs in the universe.

After watching the completely insane and atrocious “Collateral Beauty” last year so recently, and now the equally terrible “The Space Between Us,” I have now made it my personal mission in life to critically slaughter anything and everything Allan Loeb writes until he can produce a screenplay that does not want to make me want to blow my brains out. Ok, maybe that is taking things a little too far, but I can tell you one thing for certain: “The Space Between Us” may have helped me set a new a new record for the number of eye rolls I can do within the span of two hours.

Nathaniel Shepherd (Gary Oldman) is the founder of a company that attempts to colonize planet Mars with a place he calls East Texas. The first astronauts he sends up encounter an unexpected tragedy when Sarah Elliot (Janet Montgomery) gives birth in space to Gardner Elliot and dies during childbirth. Without his mother or father and having lived his entire life in East Texas, Gardner, now 16, has dreams of visiting Earth for the first time in his life and meeting up with a girl he has met online nicknamed Tulsa (Britt Robertson). Gardner survives the trip back to Earth but does not have much time on Earth due to having enlarged organs due to the Earth’s gravity. He attempts to connect with Tulsa and discover the identity of his father before time runs out.

Where do I begin when it comes to “The Space Between Us?” The screenplay is the biggest culprit most of all. Resting upon a heap of cliches, cringe-worthy dialogue, and plot twists and reveal you could see coming a mile away. The plot itself is an interesting one that probably sounded good during a pitch meeting but in the form of dialogue and character, it is a pedestrian attempt to gain our interest or respect. Asa Butterfield and Britt Robertson lack any real chemistry and the already critically mangled “young adult” genre of filmmaking takes yet another hit here as the drama, science, and romance all feel manufactured, and nonsensical. Director Peter Chelsom clumsily directs this terrible screenplay with jarring transitions between scenes, poor coverage (You know it’s going to be bad when someone looks directly into the camera during a crowd scene within the first five minutes) and failing to direct his actors to provide performances which could elevate the material.

Asa Butterfield, looking so brittle that it feels like he could snap in two any second is saddled (Like everyone else within the cast) with some of the most on the nose, terrible dialogue I have heard in any film for 2017. An actor as high in caliber such as Gary Oldman should not be involved with films such as this. However, with “Criminal” last year and now “The Space Between Us” it’s clear that this once-beloved actor who could elevate any film he was a part of no longer has the spark he used to. Here’s to hoping that a decent script and a better director can conjure up another timeless performance from the once great actor. Britt Robertson actually fares the best of all of the actors in the film and her magnetic personality is one that you could see the sensitive and deprived Gardner falling for. It’s just too bad that when the two young actors have to actually swap dialogue exchanges with one another, you want nothing more than for them to not interact on screen so we can be spared the “I love you’s” and schmaltzy cute moments of courtship.

It’s always so odd when you have to write a review for a film that is as awful as “The Space Between Us.” I tried so hard to come up with something good to say about this film. However, every aspect of production, from the script, to the acting, directing, cinematography and music, all of it either fails or does nothing to distinguish itself and make this movie worth seeking out. Its moments of failed humor and romance make it one of the most awkward movies of the year to sit through and quite frankly, I’m amazed I survived the arduous two-hour journey.