“THE SKY IS EVERYWHERE” 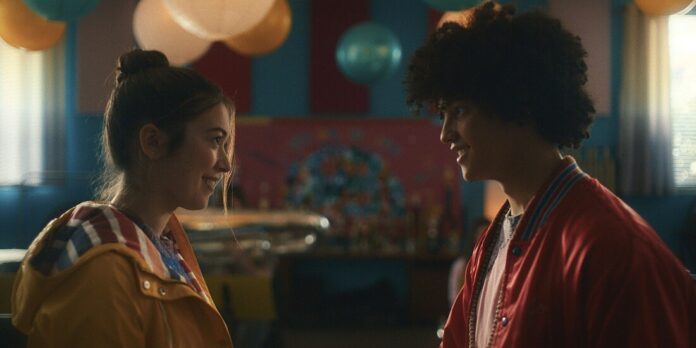 ​”Last summer, I learned that the most horrible thing you can imagine can happen at any minute,” the voiceover for “The Sky is Everywhere” explains in the film’s first few minutes. The latest in a long-running line of films about teens dealing with grief follows 17-year-old Lennie (Grace Kaufman), who is still reeling from the death of her beloved older sister Bailey (Havana Rose Liu). The A24 and Apple TV+ film is based on the novel of the same name by Jandy Nelson, who also adapted the book for the screen. It represents something a bit different than director Josephine Decker’s usual fare – and unfortunately doesn’t live up to her previous work on “Madeline’s Madeline” and “Shirley.”

Lennie Walker lives in Northern California, in California’s Enchanted Forest, with her hippie grandma (Cherry Jones) and pothead Uncle Big (Jason Segel). She’s a teenage music prodigy who is very gifted on the clarinet but has struggled to play since her sister’s death, even ceding her position as the first chair in the band to her mean-girl rival, Rachel (Julia Schlaepfer). She once had plans of applying to Julliard alongside her sister, but now doesn’t want to attend any music conservatory or talk to her quirky best friend Sarah (Ji-young Yoo) or do much of anything besides rereading “Wuthering Heights” and thinking about Bailey. Lennie spends her time calling her sister’s phone to hear her voicemail message and writing notes to her on everything she can find: leaves, shoes, even closet walls. She refuses to move any of Bailey’s belongings in the room they shared, believing it will make it too final that she’s not coming back. Before Bailey suddenly died of fatal heart arrhythmia, like their mother many years before, Lennie was content to live in her shadow. Bailey was the outgoing, vivacious theater kid, in contrast to Lennie’s more reserved band student, and Liu has a sort of magical glow in the flashbacks of the two sisters. We see Lennie’s memories of the two as if they’re replaying in her head, sometimes at inopportune times, giving us a sense of their closeness. The one person that Lennie finds comfort in is Bailey’s ex-boyfriend Toby (Pico Alexander). Though she resented him while her sister was alive, she believes that he’s the only one who can understand her grief. She craves someone to cling to as her world is falling apart, and soon the bond between her and Toby begins to shift. Lennie’s anguish over her sister and lust for Toby become entangled, and seeing her relish in kissing her dead sister’s boyfriend almost makes her a bit too unlikeable. But Lennie is also interested in the new boy at school, Joe (Jacques Colimon), a fellow talented musician who is determined to get to know her. This leads to a love triangle, which I’m not opposed to when done well, but it’s hard to be emotionally engaged with it when one of the options is so obviously wrong. Decker’s film is better when it focuses on Lennie dealing with her sister’s death than the melodrama that it slips into around the misguided teen romance.

“The Sky Is Everywhere” is mainly defined by Decker’s magical realism approach to the world Lennie inhabits from music, causing people to float in the air to rose bushes coming alive. The fantasy sequences give us insight into her mind, and the cinematography by Ava Berkofsky and editing by Laura Zempel work in perfect harmony create a very whimsical and stylized look for the film. However, the cutesy style overshadows everything else and feels like an odd match for such a serious subject matter.

“The Sky Is Everywhere” has some elements working in its favor, like its distinctive score by Caroline Shaw and the strong lead performance from Grace Kaufman. However, much of Decker’s interpretation of the story comes across as twee, more like a 2014 Tumblr visual than a moving portrayal of coping with loss. The love triangle is unengaging, and the runtime feels longer than you think, despite being under two hours. But I guess when your central story cannot emotionally connect with its audience, it’s no surprise that everything would feel drawn out. “The Sky is Everywhere” may be aesthetically creative as it retains Decker’s signature directorial style, which has made her one of the more exciting directors to watch. Still, Jandy Nelson’s adaptation of her own story falters in its narrative. It so desperately wants to say something profound about grief, but it never quite hits the mark.