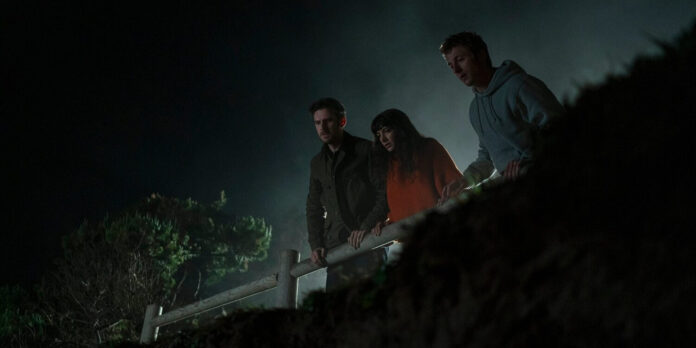 THE STORY – Best friends Timmy and Marco go to the same high school in Peckham, but live in neighboring London boroughs. When Marco gets beaten up by one of Timmy’s primary school friends, the two boys wind up on rival sides of a never-ending cycle of gang wars in which there are no winners — only hapless victims.
​
THE CAST – Alison Brie, Dan Stevens, Sheila Vand & Jeremy Allen White​
​
THE TEAM – Dave Franco (Director/Writer) & Joe Swanberg (Writer)​
​
THE RUNNING TIME – 88 Minutes

During this troubling time where we are all stuck indoors on a continuous basis, “The Rental” comes to digital VOD this weekend to summon our deepest fears and anxieties. However, it’s not so much the claustrophobic setting, nor is it the traditional slasher horror that the film is interested in. Rather, actor Dave Franco’s directorial debut (which he also co-wrote with Joe Swanberg) is a riveting potboiler of human nature, insecurity, and betrayal. Had it stuck to this vision, instead of transforming into a house-invasion style horror film in the third act, I wouldn’t have been as disappointed by Franco’s film. I still enjoyed it for what it was though and believe he shows tremendous promise as a filmmaker, at least more than his brother.

Charlie (Dan Stevens) and his business partner Mina (Sheila Vand) have just closed their Series-C funding on their business and are looking to celebrate for the weekend. They book a beautiful Airbnb rental house with Charlie’s wife Michelle (Alison Brie) and Mina’s boyfriend Josh (Jeremy Allen White), who also happens to be Charlie’s brother. After an uncomfortable meeting with the rental’s racist and rude owner Taylor (Toby Huss), and growing suspicions that they’re being watched by a mysterious observer, the four renters soon realize that what they really have to fear are the secrets they are keeping from each other.

Alison Brie, Dan Stevens, Jeremy Allen White, and Sheila Vand all work very well together and develop believable chemistry with each other within the lean 88-minute runtime. So much so, that when tensions reach a breaking point, we become fully invested in who will walk away from this nightmarish weekend unscathed. The answer is no one but Franco’s strength as a filmmaker lies in his characterization and his command over the tone of this film for its first two thirds. There is a degree of control, restraint and freedom that he gives to the actors which comes across in the blocking, natural performances and pacing. The level of realistic stakes that this story builds to is both relatable and truly terrifying, more so than any brutal killing or jumpscare could ever pull off. Which is why, for a film dealing so much with betrayal, it’s a shame to see Franco betray his own story for some cheap genre thrills in the final minutes.

I normally wouldn’t have a problem with this but “The Rental” has no real takeaway message. No point to its character’s extended dialogue sequences, their stresses, or anything else for that matter. It’s content with simply being a good ol’ slasher film and nothing more. It’s fun to watch these actors play off of each other and for their underlying complexities to manifest into something anxiety-inducing but that’s all you get. And even at a merciful 88 minutes long, it may not be enough. In conclusion, “The Rental” is best watched as a rental.