The Power Of Dominating The Fall Film Festivals 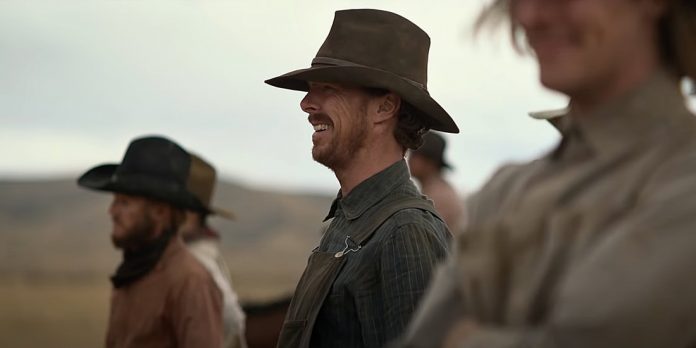 ​“The Power of the Dog” had its teaser trailer debut yesterday, right before it’s selected to play at the Venice, Toronto, and New York film festivals. Because it’s the rare film to screen at all the major festivals in the next few weeks, it may well be the preseason favorite to ‘win’ film festival season and set the early bar for the Oscar race. Being the big breakout of film festival season carried “Nomadland” all the way last year and has worked for pretty much every Best Picture winner since the mid-2000s. “The Power of the Dog” would have a long way to go to match that, even if it is the major contender that all its festival bookings suggest. Nonetheless, all the signs are there to suggest it could be.

“The Power of the Dog” is a Netflix awards season movie helmed by Jane Campion, in which a “fearsome rancher” played by Benedict Cumberbatch “torments” his brother, his new wife, and her son until he is “exposed to the possibility of love.” While this sounds more like a challenging drama than a big film festival crowd-pleaser, there is a lot of confidence in how festival audiences will react, given that it is Venice’s opening night film, the centerpiece of the New York Film Festival, a competitor at Toronto and a more than likely participant at Telluride.

This gives “The Power of the Dog” the most prominent festival presence among possible Oscar contenders, followed closely by the likes of “Dune,” “Spencer,” “Parallel Mothers,” “The Lost Daughter,” and others. It doesn’t automatically mean it is guaranteed to be a post-festival Oscar frontrunner like “Nomadland” was last year, or like “Parasite,” “Jojo Rabbit,” and “Marriage Story” were in 2019. But if it plays big in some capacity, there are plenty of narratives in its favor that could push it the rest of the way. Can anyone recall the last time a film played all of the big four fall film festivals and wasn’t a significant presence in the Oscar season?

If “The Power of the Dog” is a major player, it would mark Campion’s return to Oscar season for the first time since her historic nomination for “The Piano.” Now that Kathryn Bigelow and Chloe Zhao have since broken through the Oscar glass ceiling for female directors with Best Director victories, it would seem to be the right time for Campion to join them and come full circle. But should she do so, she would also break another glass ceiling of sorts. Netflix has tried again and again to win the first Best Picture for a streaming service, only for supposed favorites like “Roma,” “Marriage Story,” “The Irishman,” “The Trial of the Chicago 7” and “Mank” to run entirely out of gas at the end. “The Power of the Dog” would seem to mark Netflix’s best chance to go all the way in 2021, although the likes of “Don’t Look Up,” “The Lost Daughter,” “The Hand of God,” and “Tick…Tick…Boom!” could also emerge as Netflix’s most prominent Oscar frontrunner and much more. Yet, they don’t have the reach to make the kind of substantial early splash that “The Power of the Dog” could.

Beyond Campion and Netflix, the movie’s stars can also make a case for being overdue. Cumberbatch has a shot at his first nomination since “The Imitation Game” for what would seem to be a far different character than Alan Turing. Co-star Kirsten Dunst was last championed by award season pundits ten years ago for “Melancholia,” but now appears to have a far more accessible film and director that can land her first-ever nomination. After a debate on whether she should go Lead or Supporting, it’s being said that she will indeed go Supporting. Meanwhile, Dunst’s on and off-screen husband Jesse Plemons is probably past due for awards recognition himself after appearing in some of the most acclaimed films and TV shows of the last several years and with his meatiest role to date coming next year as the lead in Martin Scorsese’s “Killers Of The Flower Moon.”

Perhaps overdue narratives aren’t as powerful as they used to be for the Academy. If there were, Glenn Close would have won her Oscar in either 2018 or 2020, or David Fincher would have won for “Mank” and turned around Netflix’s Best Picture luck already. If “The Power of the Dog” is to finally push Netflix, Campion, Cumberbatch, Dunst, and Plemons further than they’ve ever been before in Oscar season, they will probably need to have the goods on their own. And while their massive presence at the festivals suggests favorable odds for all of them, just being there is only half the battle. Getting picked for all four main festivals doesn’t automatically mean a movie is a masterpiece or that general audiences will believe it is later on. In addition, being the hottest film on the festival circuit doesn’t instantly make it the Oscar favorite. Even when “Nomadland” made history by winning both the Venice Golden Lion and the Toronto audience award, it didn’t take complete control of the Oscar race until “The Trial of the Chicago 7” and “Mank” opened and underachieved, by comparison, months later.

With potential big players like “House of Gucci,” “Don’t Look Up,” “West Side Story,” “Nightmare Alley,” “Soggy Bottom,” and more not screening until fall, time will tell how many fall short enough to boost up the coming festival favorites. Unfortunately for “The Power of the Dog,” Netflix’s Oscar history has not shown enough endurance, regardless of its release strategy. “Roma” and “Marriage Story” jumped out of the gate in the festival season to be early frontrunners, yet they were left in the dust for Best Picture by the end, despite achieving wins in other categories. As for “The Trial of the Chicago 7” and “Mank,” the lingering suspicion that Academy voters would be more eager to award them than critics were did not pan out on Oscar night. It is common for Netflix projects of all kinds to start big and end with an anticlimax, so even if “The Power of the Dog” wins big in Venice and Toronto, it could make it all the more certain to peak too soon. Yet, suppose the narrative builds that it should be Campion’s time to win, that Cumberbatch can be a Best Actor frontrunner, and that Dunst and Plemons are due for nominations at the least (Ari Wegner could also become only the second woman to be nominated for Best Cinematography, and we still don’t know what Johnny Greenwood has in store for us with his score). In that case, it should help “The Power of the Dog” stay at the center of the Oscar conversation. Whether it maintains enough heat in the final stages to win will depend on what kind of field it is up against.

Heading into film festival season, every projected contender has some considerable doubts and speedbumps to overcome. Beyond the Netflix movies, “Dune” has to prove it is more than just a tremendous visual spectacle, “West Side Story” was already honored 60 years ago and has to prove it deserves it again, biopics “Spencer” and “The Eyes of Tammy Faye” could merely be players for its lead actresses. At the same time, “House of Gucci” and “The Last Duel” are Ridley Scott films with razor-thin tightropes to walk before even getting to voters. “King Richard,” “CODA,” “Belfast,” and “Being the Ricardos” may also walk a fine line between being crowd-pleasers and Oscar-season villains. “The Tragedy of Macbeth” is one big question mark at the moment as to whether it’s a film for the art-house crowd or for AMPAS. “Nightmare Alley” will have to make a massive case for back-to-back wins for Guillermo del Toro, and “Soggy Bottom” has to make a big case for finally getting Paul Thomas Anderson his first win.

Venice, Toronto, Telluride, and New York will partly clear up some of these mysteries, but not all of them. For the likes of “House of Gucci,” “Nightmare Alley,” “Soggy Bottom,” “West Side Story,” “Don’t Look Up” and others not ready to screen in September, they may have a longer hill to climb, since “The Departed” was the last Best Picture winner that didn’t premiere at the festivals. Therefore, it is easy to assume this year’s Best Picture will premiere over the next few weeks, making it all the more noteworthy that “The Power of the Dog” may be the most screened movie.

“The Power of the Dog” doesn’t sound like a traditional Best Picture, but neither did the last two winners. It might not sound like something that could dominate the festival season, but few saw “Nomadland’s” dominance coming before it swept Venice and Toronto. As of this writing, there are still days to go before anyone actually sees if it’s worth the hype, but a big bullseye is already on its back. The groundwork has clearly been laid out for “The Power of the Dog” to do well in Venice, Toronto, New York, and (probably) Telluride before trying its luck with general audiences on Netflix on December 1st. Of course, it could also burn bright at first and then die out by the time Best Picture is decided, even if Campion, Cumberbatch, Dunst, and Plemons have better individual luck. Nevertheless, it seems a safe bet that “The Power of the Dog” will burn bright in some capacity over the next few weeks; it’s just a question of how brightly?

Are you exited for “The Power of the Dog?” Are you attending any of the fall film festivals? Do you think it could be the early frontrunner for Best Picture? Let us know in the comments section below or on our Twitter account.