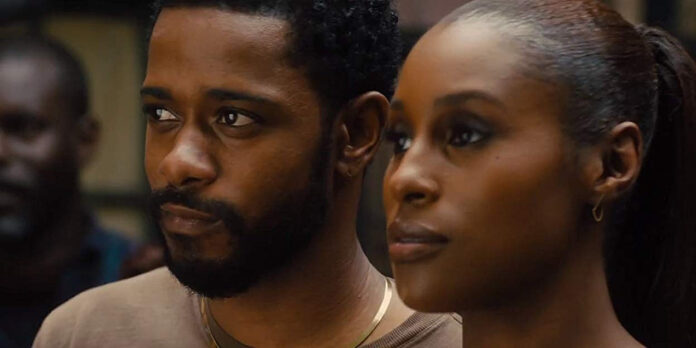 ​”Good things take time to develop.” This saying is true of photographs. Of a relationship. However, the same cannot be said for the movie known as “The Photograph.” Despite a beautifully talented cast of actors, writer and director Stella Meghie’s film is confusing and flat in its approach to exploring one’s professional ambitions contrasted with one’s personal desires for love. There are some beautiful moments on display here but sadly, this snapshot of two New Yorker’s lives and their “will they or won’t they” tension within their relationship, will fade past this Valentine’s Day weekend.

Mae (“Insecure’s” Issa Rae) has recently found out that her famous photographer mother has passed away. Michael (Lakeith Stanfield), a reporter for the Republic, has just ended a series relationship and is looking to make a big change in his life. The two New Yorkers are brought together through a photograph left behind for Mae from her mother, along with two letters which explains her mother’s past, setting Mae off on her own romantic journey.

The main reason to see “The Photograph” is its cast. Issa Rae gives a reserved performance that hints at the right amount of vulnerability and confusion her character is going through, making her an intriguing human being both to Michael and to the audience. One wishes the film explored her character a little bit more thoroughly as it does Lakeith’s but Issa Rae still makes for a magnetic screen presence. And speaking of magnetic screen presence, Lakeith Stanfield slides comfortably into the role of a smooth-talking romantic lead who is so unbelievably suave, it’s very hard to see anyone not falling for his charm. Rob Morgan and Lil Rel Howery deliver different performances in that one is very dramatic and breaks your heart while the other is very comedic and warms your heart. They each compliment the two leads very well. Both Michael and Mae are flawed in how they communicate with each other but the screenplay’s approach to their relationship is very mature if a bit bland. It doesn’t cover any new ground making this romantic drama hard to stand out amongst all the others in its genre.

Stella Meghie does struggle for the first 15 minutes in establishing who her protagonist is and what their desires are. Motivations are unclear and there isn’t really anything pushing the story forward. The flashbacks to  1980’s Louisianna are never particularly as exciting as the modern story between Mae and Michael in New York. And it’s odd that the narrative structure is conveyed through a series of letters from Mae’s mother to her when the film is called “The Photograph.” There are far too many times where feels like the movie should’ve been called “The Letters” instead. This is all to say that the film is messy in its execution but the actors eventually catch the audience up to speed with their likable work.

It’s refreshing to see a black-led film that doesn’t conform to tragic dramatic stereotypes to tell its story. Instead, it is attempting to tell a mature love story between two flawed individuals, each with their own professional goals but sharing a common desire to be together. The cast makes this romantic drama worth checking out over the Valentine’s Day weekend, with its mature themes and lovely laid back jazzy score. Just don’t expect anything more than that.