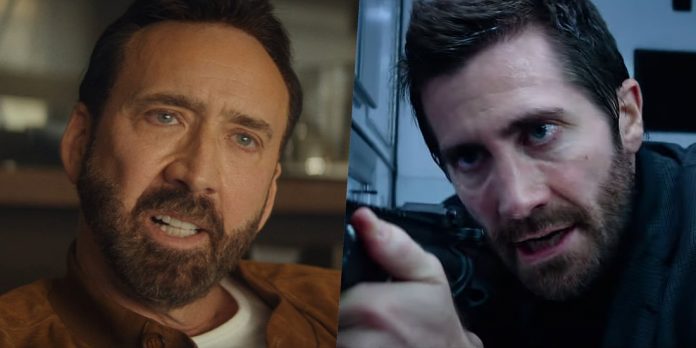 Suppose Michael Bay had made “Ambulance” 25 years ago. In that case, there is almost no doubt Nicolas Cage would have played the scenery-chewing, gun touting, and slightly unhinged bank robber driving through L.A. if he had time between all his other unhinged late 90s action movies. But it is almost fitting that a modern-day Nicolas Cage in Jake Gyllenhaal headlined this modern-day Bay demolition derby, especially right before the real Nicolas Cage continues his latest comeback with “The Unbearable Weight Of Massive Talent.” ​Gyllenhaal and Cage have never worked together before, which seems somewhat remarkable considering their career paths. While Gyllenhaal hasn’t reached the point of making dozens of direct to DVD films to pay off bankruptcy, like Cage just got out of, their career trajectories have become more and more similar in other ways.

Both Gyllenhaal and Cage started acting at a young age and are hardly the only performers and creative masterminds in their respective families. When Cage broke out in the 1980s, he played many a bizarre and somewhat unbalanced character in films like “Raising Arizona, “Moonstruck,” “Vampire’s Kiss,” and others, yet he was still considered one of the best breakout dramatic actors of his generation. Gyllenhaal started out the same way in the late 90s and early 2000s, with his own share of slightly off characters in films like “Donnie Darko” and “The Good Girl,” between serious breakout roles for the likes of “October Sky” and “Brokeback Mountain.”

Cage reached his zenith in the mid-90s, with his Oscar victory for “Leaving Las Vegas” and his subsequent conquest of the action genre. Gyllenhaal didn’t quite reach those heights in awards season or the box office at his peak. However, the likes of “Zodiac,” “Prisoners,” “Enemy,” and “Nightcrawler” continued to establish him as one of this generation’s dramatic powerhouses. But even in those movies, Gyllenhaal’s characters displayed various quirks and odd touches that were not unlike what Cage might have shown off in his heyday.

With a little bit of imagination, it is all too easy to imagine a younger Cage playing Gyllenhaal’s recklessly obsessed characters in “Zodiac” and “Prisoners,” his twin characters in “Enemy,” and especially his fame-hungry, sociopathic character in “Nightcrawler.” And in recent years, it has taken even less imagination to picture Cage as some of Gyllenhaal’s demented characters of late, like his T.V. host in “Okja,” his fake superhero in “Spider-Man: Far From Home,” his flustered Mr. Music in “John Mulaney & the Sack Lunch Bunch,” his crazed art critic in “Velvet Buzzsaw,” and now his action movie anti-hero in “Ambulance” that comes right out of the 90s Cage action movie playbook.

These recent movies and characters have made Gyllenhaal better known for quirky, scenery-chewing performances than serious performances lately, despite the occasional full dramatic role in films like “Wildlife” and “Stronger.” There was also his virtual one-man show “The Guilty” on Netflix last fall, though his on-the-razor’s-edge detective turned 911 operator was another Cage-level mix of drama and showmanship.

This was pretty much Cage’s limbo in the 90s and most of the 2000s, as his more theatrical characters and action blockbusters began to overshadow his more serious work, despite the occasional dramatic success like his Oscar-nominated duel role in “Adaptation.” But in this period of time, Cage’s balance between being a brilliant actor and being a spectacle of himself was eventually lost, to the point where even his action movies became yawners, and his wilder films like “The Wicker Man” made him look ridiculous in all the wrong ways.

Gyllenhaal hasn’t reached those kinds of crossroads yet, but the warning signs may be there. The box office disappointment of “Ambulance” probably doesn’t help, although it is far more challenging for non-superhero action movies to make it big now than it was at Bay and Cage’s peak. Nonetheless, Gyllenhaal’s most recent work has been defined more by scene-stealing and spectacle than for poignant acting, even if his most over-the-top work hasn’t become a YouTube sensation yet. And while Gyllenhaal doesn’t have many Cage-like stories of bizarre off-screen antics and methods to overshadow any on-screen work, even Cage was never the widely suspected inspiration for a cad in a 10-minute Taylor Swift music video like Gyllenhaal was last fall.

Yet Cage’s off-screen stories and odd techniques have added to his legend instead of harming it, regardless of the end result on-screen, making him almost like the anti-Jared Leto of Method acting. As for Gyllenhaal, he just laughed off the ultra-serious side of Method acting and his own past commitment to it on “Saturday Night Live.” In this context, Cage and Gyllenhaal’s unique techniques and weird characters make them more refreshing compared to some more exhaustingly exuberant performers. Nonetheless, their bizarre off-screen headlines and weirder on-screen scenery-chewing sometimes speak louder than their more formidable acting talents, as they did with Cage during his lowest points and as they might do with Gyllenhaal if he’s not careful.

In that regard, it is almost fitting that Gyllenhaal is finally doing a Bay action movie at this particular stage of his career. And in that regard, it is excessively fitting he did one that’s out now, just days before Cage returns to theaters with “The Unbearable Weight Of Massive Talent” and punctuates his recent career revival.

Cage was mainly mocked for his dozens of B-list movies in the last decade, but the tide has now shifted fairly quickly. Between many YouTube tributes to his greatest and loudest scenes of the past and the occasional new Film Twitter cult hit like “Mandy,” Cage was already being reassessed even before “Pig” won him his biggest raves in ages last year. Now with “The Unbearable Weight Of Massive Talent” set to be the ultimate meta love-letter to Cage’s career and on and off-screen personas, it appears a Cage renaissance – or “Cage-aissance” as even trailers have coined – is in full swing.

In a career of massive highs and even more dramatic lows, Cage now seems to be at his latest high point, even if it took quite a while to get back there. As such, it is ironic and fitting that Cage’s new stage is being cemented now, right after “Ambulance” further cemented Gyllenhaal as the Cage of this current generation, for good and potentially more ill later.
To be fair, Gyllenhaal’s recent work is nowhere near the bottom of Cage’s barrel in the late 2000s and early 2010s, and he has in no way looked as tuned out as Cage seemed to be in those films either. If Gyllenhaal is paralleling the late 90s and early 2000s of Cage’s career, accidentally or not, he may still be due for an “Adaptation” dramatic breakthrough in between as well (which will hopefully bring him his second elusive Oscar nomination) – even though Gyllenhaal already played doubles in “Enemy” years ago. With almost a dozen pending projects in production or announced, any one of them could return Gyllenhaal back to his dramatic form like “Pig” just did for Cage.

This month, “The Unbearable Weight Of Massive Talent” is bound to be the latest recent reminder of how there’s been no one like Cage. But also this month, “Ambulance” has already been the latest recent reminder of how Gyllenhaal is starting to get close, in on-screen theatricality if not in off-screen antics quite yet. Of course, until the last year or two, being like Cage both on and off-screen had its drawbacks for a long stretch of time – which is something Gyllenhaal may want to keep in mind at this crucial stage of his career.

Gyllenhaal may well keep getting typecast in more over-the-top Cage-like roles in the next few years while taking less and less restrained dramatic parts. Yet he may well be able to keep a balance between moving and grandiose acting longer than Cage did decades ago. But if the Gyllenhaal of “Brokeback Mountain,” “October Sky,” “Nightcrawler,” and “Zodiac” starts to seem further and further away from returning, much like the Cage of “Leaving Las Vegas” and “Adaptation.” seemed to disappear by the end of the 2000s, then these career parallels could look a bit more depressing for at least a little while.

Do you think Jake Gyllenhaal’s career is following a similar trajectory as Nicolas Cage’s? Have you seen either “Ambulance” or “The Unbearable Weight Of Massive Talent” yet? If so, what did you think? Do you believe Jake Gyllenhaal will get his second Oscar nomination some time this decade? Please let us know your thoughts in the comments section below or on our Twitter account.