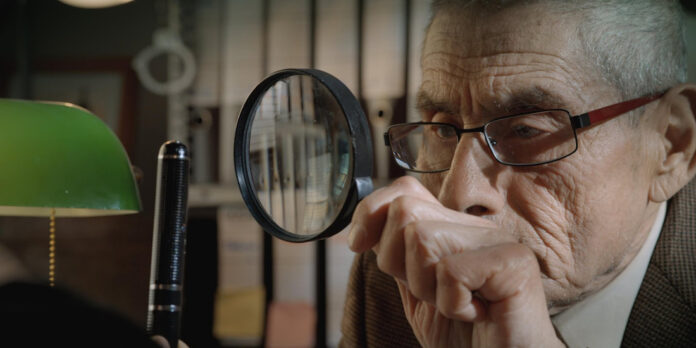 THE STORY – In Chile, an 83-year-old man named Sergio is hired as a spy to investigate potential elder abuse in a nursing home.​
​
THE CAST – Sergio Chamy

​​“The Mole Agent” is a wonderfully unique documentary that’s part espionage flick and part slice of life drama. When widower Sergio Chamy responds to a job listing in Chile looking specifically for a senior citizen, he has no idea what he’s getting himself into. The job is to be a mole in a nursing home where a resident named Sonia may be suffering from elder abuse. Sergio’s job is to live as a typical resident in the nursing home but observe and report any suspicious activities.

Writer-director Maite Alberdi succeeds in creating a thoroughly entertaining and emotionally engaging documentary that feels like a fictionalized narrative. (Though there are times the lines of reality and fiction may be blurred to benefit the story.) I’ve never seen a spy narrative play out like this, and it’s so interesting. Alberdi filmed 300 hours of material for the documentary and cut it down to a breezy 89-minute runtime, picking moments that are just right for the documentary. Like the moment we see Romulu (the lead agent) try to teach Sergio how to use current technology (FaceTime and WhatsApp) as a way to communicate. It’s humorous and entirely relatable. I think we can all say we’ve been there with our parents or grandparents.

Although the film’s spy aspect is great, it’s the interpersonal aspect that pulls you into the story. Sergio is such a kind and warm-hearted individual that he goes out of his way to ask others about their day, their children, and about their lives. Unsurprisingly, he finds a community in the nursing home. Although it may be challenging to find common ground with some individuals on first meeting, like the quiet Sonia, but he keeps trying and some beautiful friendships form. The lively Berita takes an interest in Sergio and stands out as a joy in the nursing home. She’s lively and energetic, always beaming with happiness. As an audience member, I was very affected by the way “The Mole Agent” shines a light on these individuals’ lives.

There aren’t many films where senior citizens are the primary focus. Watching “The Mole Agent” made me think of the days my grandpa lived in an assisted living community. How would he react as a mole agent? I thought of the days walking through the hallways of the assisted living center and the nights we played bingo with the lovely people who lived there. They all had their own story to tell, just like Sergio, Sonia, and Berita. I appreciate that “The Mole Agent” showcases these individuals and their experiences. These are real people who deserve attention – how lovely that they get their moment here.

Life has many mysteries, and “The Mole Agent” looks to solve a few. This is a wonderfully moving documentary highlighting the importance of family, love, and friendship. You’ll want to check out this charming documentary and call your family after you do so.