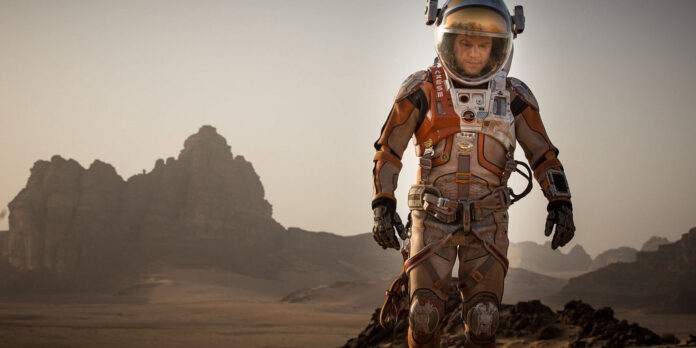 THE STORY – When astronauts blast off from the planet Mars, they leave behind Mark Watney (Matt Damon), presumed dead after a fierce storm. With only a meager amount of supplies, the stranded visitor must utilize his wits and spirit to find a way to survive on the hostile planet. Meanwhile, back on Earth, members of NASA and a team of international scientists work tirelessly to bring him home, while his crew mates hatch their own plan for a daring rescue mission.

“Everywhere I go, I’m the first,” astronaut Mark Watney says in “The Martian” after he has been presumed dead and abandoned on the planet by his crew following a storm. Maybe that’s part of the appeal of this 2015 movie, directed by Ridley Scott and based on the novel by Andy Weir. Much of the film is focused on one man’s survival on an empty planet and there’s a sense of grandiosity in everything he does, even planting potatoes, though it’s mixed with an unexpected amount of humor that keeps it from feeling pretentious.

“The Martian” follows astronaut Mark Watney (Matt Damon) who is separated from his crew during a storm and presumed dead. The rest of the team, led by commander Melissa Lewis (Jessica Chastain), leaves without him despite their guilt. However, Watney is injured, but alive and has to figure out ways to stretch his resources to last until another shuttle can reach him and a way to contact the NASA center to let them know he’s there. The movie shifts between Watney’s fight for survival, the crew (including Michael Pena, Kate Mara, and Sebastian Stan) out in space, and the NASA center where Director Teddy Sanders (Jeff Daniels) has some difficult decisions to make as the public watches eagerly.

A great screenplay is aided by the gorgeous and intricate production design, creating impressive shots of the “Mars” landscape. From the intense and chaotic storm to the eerie peacefulness of the land Watney wakes to, even the first fifteen minutes of this film are impressive. The spaceships themselves also feature cool design and some awesome gravity effects. Certainly, it’s not wildly different from other space movies that have been released in the decade, but the landscape of Mars is refreshingly different from the normal moon scenery shown.

For a film that wastes no time in its opening, jumping straight to the storm which results in Watney being left behind, it does slow down in the middle to a point of dragging. The scenes on Earth are considerably less compelling than those in space making the two hours and twenty minutes runtime apparent. One bright spot in these scenes is Donald Glover as astrodynamics scientist Rich Purnell who brings his usual charm to the role.

The entire ensemble of the cast elevates this movie and characters that could seem one-dimensional or underdeveloped are saved by lovely performances. Jessica Chastain is certainly one of the most reliable actresses working today and while her performance is understated, and perhaps the role could have been expanded, she helps ground the film. In fact, the sense of community amongst all of the astronaut crew is one of the best things about “The Martian.” This role brought Matt Damon his third Academy Award nomination for acting and he is phenomenal in it. His work is more of an actual performance than his previous roles have often required from him, as he has mostly relied on his movie-star charm and looks. His acting in the first fifteen minutes of the film, from the storm, to discovering he is alone on Mars, to treating his own injury are easily some of the best he’s ever put forward.

One thing that sets this movie aside from other space travel movies is the amount of humor in Watney’s character. Much of his parts are shot in a vlog-like style as he logs videos about his time on Mars. This allows him to humorously narrate his actions — from silly mistakes in calculations to his frustration over running out of ketchup. It’s also a clever ploy to give him a reason for dialogue despite being on a planet alone.

One of the funniest aspects is his ongoing frustration with the fact that the only music he has access to is Commander Lewis’s 1970s disco music. This music provides the movie with an amazing soundtrack with everything from Donna Summer’s “Hot Stuff” to ABBA’s “Waterloo.” (Come on, Watney, what do you have to complain about?) This music is supplemented with a great score by Harry Gregson-Williams. The sound design of the movie is also good, from the storms and wind to the effect of astronauts being able to hear their own breathing in their helmet.

Admittedly, space travel movies are not normally my thing, but this one blew me away. It is at its best in its scenes in outer space, whether with Mark Watney himself or the rest of the astronauts. It seems to understand that the quotidian of life in space as a lone man attempts to survive is as fascinating as any storm or explosion. “The Martian” is an ode to the power of science, the power of the human will to survive, and the power of hope.